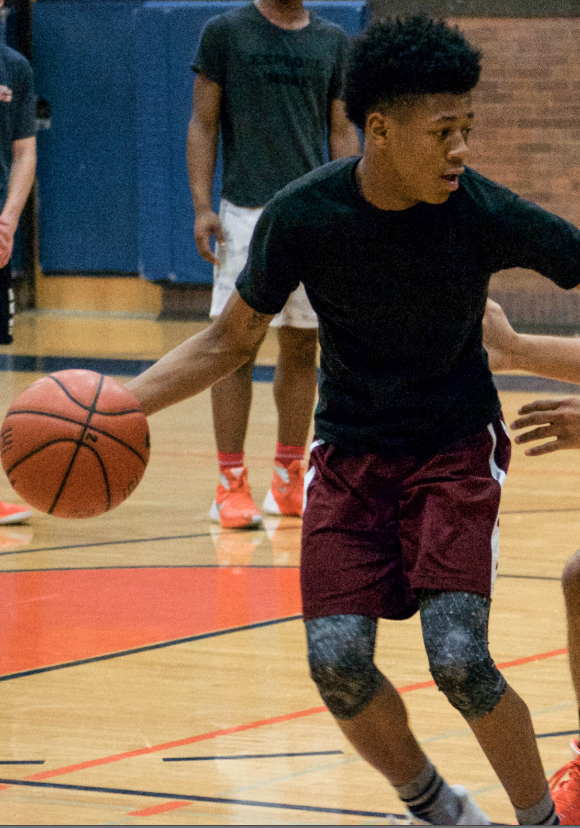 While it is rare for multiple underclassmen to make a big impact on a varsity sport, three sophomore guards look to do just that when they hit the court this season.

Ryan Bost, Lance Jones and Jaheim Holden all made the varsity team as freshmen but saw limited game minutes last season. They practiced every day with the varsity team last year, and coach Mike Ellis thinks that really prepared them for more playing time this season.

“Last season when they practiced with the varsity, they were introduced to a lot of our concepts and philosophies so now they have things to draw back on,” Ellis says. “Now they can make quick decisions in games.”

The three sophomores are excited to bring their fast paced style, energy and intensity to the varsity team this season.

“I think we help the team because we have attacking ability on offense and defensive skills that cannot be replaced,” Jones says.

The group is eager to help Evanston reach its ultimate goal, a state championship. It would be their first since the 1967-68 season.

“I just want to be able to lead the team in the right direction so that we can win state,” Holden says.

This year it definitely will not be difficult for Ellis to find minutes for the talented group of sophomores.

“In our system, we always play two point guards at a time,” Ellis says. “Obviously we have an all-stater in Nojel Eastern who is a point guard and all three of the sophomores are solid point guards too. So it’s great that among the four of them, we have two spots to fill throughout the game.”

The sophomores are thankful to have other players who helped them make the transition into a more prominent role.

“This year I am trying to follow the example of Nojel,” Holden says. “He is really mentally focused and everyone on our team needs to take that type of mindset into the season so we can be ready to play.”

Both Bost and Holden also credited graduated senior Trevon Marshall for helping them along the way as freshmen.

This season, the sophomores will also look to each other for support and motivation when times get challenging.

“Having Jaheim and Lance there really helps push me and motivate me to go hard in practice everyday,” Bost says.

Although Jones is the highest recruited prospect of the three, ranking as the number six sophomore in the area, according to getbucketschicago.com’s summer rankings, the other two players received mentions as “elite players from the suburbs” on that same website. All three players are also getting looked at by various Division 1 programs.