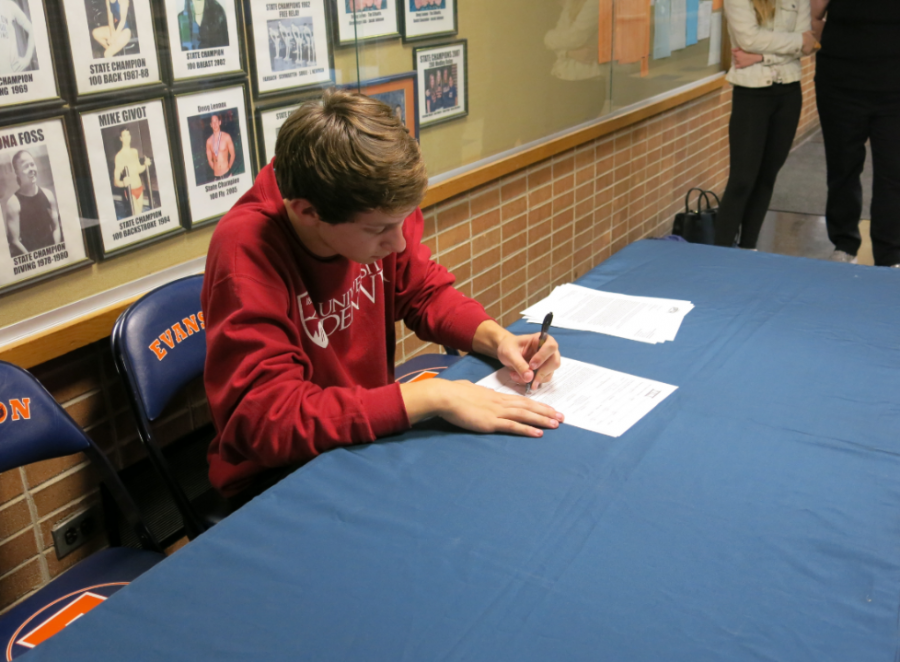 Next year, senior Turner Dobbs will be diving for the University of Denver team. Last Thursday, surrounded by ETHS swimming coaches and a few close family members, he signed his commitment papers to make it official.

Dobbs’ commitment represents a milestone for the ETHS swim and dive program. Athletic Director Chris Livatino had trouble recalling the last time a Wildkit diver made it to the collegiate level.

“I can’t remember the last time a diver committed, male or female, so that just shows how long it has been. It’s been quite a while since we had someone of his skill level do intercollegiate diving,” he says.

In the upcoming years, more divers from Evanston might be seen competing at the college level, with two rising stars on the ETHS team in sophomore Trevor Nelson and junior Harel Anolick.

Dobbs says he decided to attend University of Denver not only because of its coaching and facilities, but also because it will help advance his career aspirations. He wants to major in accounting, and the business program at Denver is among the best in the country, ranking in the top 100 of publications such as Bloomberg Businessweek and The Financial Times. His life beyond diving was a major consideration in his decision.

“If I were to break a leg, I had to factor in whether I would still be happy if I couldn’t dive. Considering what I would do outside of diving was the hardest part,” he says.

Dobbs has seen the diving program come a long way during his time at ETHS. Joining as a freshman with little to no prior experience in the pool, he competed as a varsity athlete because there was only one other diver on the team. Eventually working his way up to place in the top six at numerous state and regional competitions, he says that the popularity of diving at Evanston has expanded over the last four years.

“With guys like Harel and Trevor, diving has become more fun and energetic. There’s more cheering for diving, and not only more divers, but better divers. Practice is more fun and challenging with increased competition,” says Dobbs.

“He’s undoubtedly been one of our greatest divers.”