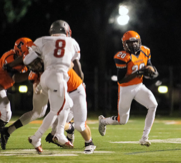 After starting the season with three big wins, the Kits will have to bring their best effort tonight in order to take down the Barrington Broncos.

“Playing a top notch team at home is always going to bring out our intensity. We’re going to have to bring our A game,” senior Charlie Krause said.

According to the Chicago Tribune, the Broncos were ranked 19 in the state prior to their 41-27 win against number 12 ranked Maine South. They remain unbeaten with a 3-0 record.

Their defense is lead by defensive end Jackson Perkins and middle linebacker Blake Holley who are both committed to play at Navy next year. While 6’6” wide receiver Josh Babicz, North Dakota State commit, offers a deep ball option.

Although, the Broncos have a talented receiver their high powered offense is mainly focused on the run game. Through three games, they have run for 915 yards and junior quarterback Ray Niro has 431 of them.

“We’re going to have to mix up our coverages and give them different looks,” Burzawa said. “We have to get 11 orange helmets to the football and show up in a bad mood on defense.”

For ETHS, they come into the game after taking down Hubbard, Foreman, and Conant. Coming into the season, there were doubts about who was going to step up on offense. Senior running back Ben Easington quickly proved himself after converting from linebacker. He’s started the season with 353 rushing yards and five touchdowns.

“I learned it’s a lot easier to score if you know the defensive mindset,” Easington said. “Also I now know that slowing down lets my blockers get set up instead of shooting the first gap I see.”

The starters only played about half of the first quarter in the Foreman game because the Kits got out to such a big lead. The coaching staff was happy to get new players in a friday night experience.

“We need to create more depth and have more guys contributing. The effort has been good, but we need to get our technique better which equals great execution,” coach Burzawa said.

The team loves playing at home due to the support of the student body and the band. With the grind of the schedule coming up, they’ll take all the support they can get.

“It’ll be a big test for us, but being in our backyard is always more comfortable,” Burzawa said.