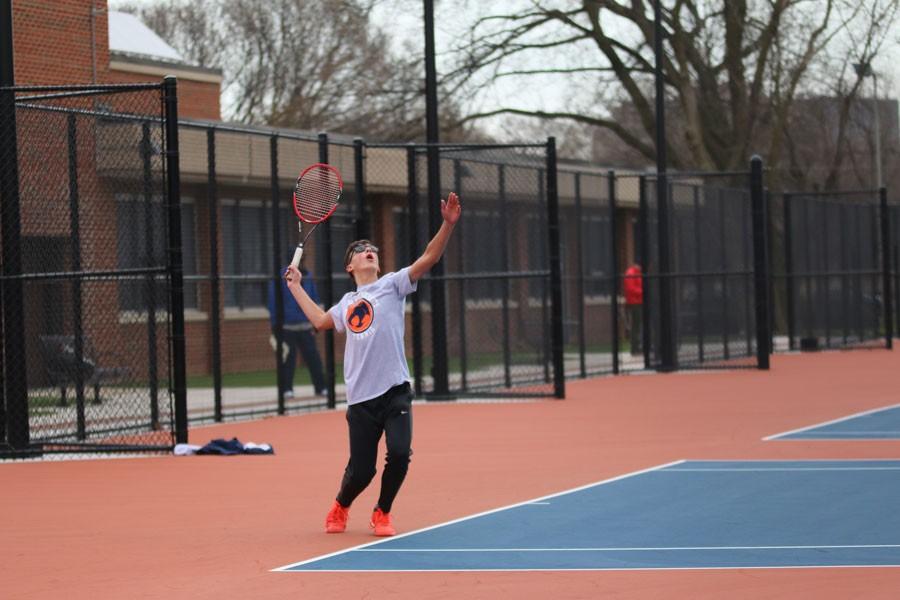 King of the court.

Tennis will travel to Mount Prospect tomorrow to fight for wins against a wide range of teams and talent at the Prospect Power Eight Invite.

Teams such as Naperville North, Mount Prospect, Lake Forest, and Niles North will all compete at the invite this year. But, Niles North, whom Evanston has not lost too in six years, will not pose a threat to the Kits. While others such as Lake Forest, a powerhouse school with a strong reputation, will be more of a challenge on the court.

“Niles North usually have a few good players at the top of their line up with a strong one doubles team,” said senior captain Ryan Foreman. “But it drops off pretty quickly and because of our size we quickly outnumber them.”

“Lake forest is one of the best teams, they are very strong across the board and have really good players at all positions,” added senior co-captain Jordan Shapiro “It would be an accomplishment if we won even one of the matches against them.”

The North Shore is known as one of the toughest regions in not only the state, but the country for tennis. This is where lack of commitment in the offseason becomes a challenge for the Kits.

“We play in a very competitive conference, and the area itself always produces some of the best players in the state,” said sophomore Max Newman. “We constantly compete against players who practice at least 7 times a week year round.”

In addition to other offseason commitments, other factors affect the Kits season as well.

“Many other teams in this area have a lot more money invested in their teams and indoor facilities,” said Foreman. “Two years ago we began practices at Northwestern’s indoor courts and that especially will be crucial to playing in the off season and increasing our chances to win.”

The Kits started their season strong winning their home opener 7-2 against Whitney Young, and with gaps in the lineup from last years graduating class, the team was fortunate to have have two strong returning singles players, sophomores Charlie Lindland and Max Newman return, as well as a impressive incoming freshman class, headed by doubles player Alec Avery.

“Our Freshman class this year is outstanding,” said coach Marcus Plonus. “Almost everyone has experience and they are all wanting to improve.”

“Jordan and I have played together since sophomore year and we can really anticipate each other’s moves, this really helps us out on the court,” said Foreman.