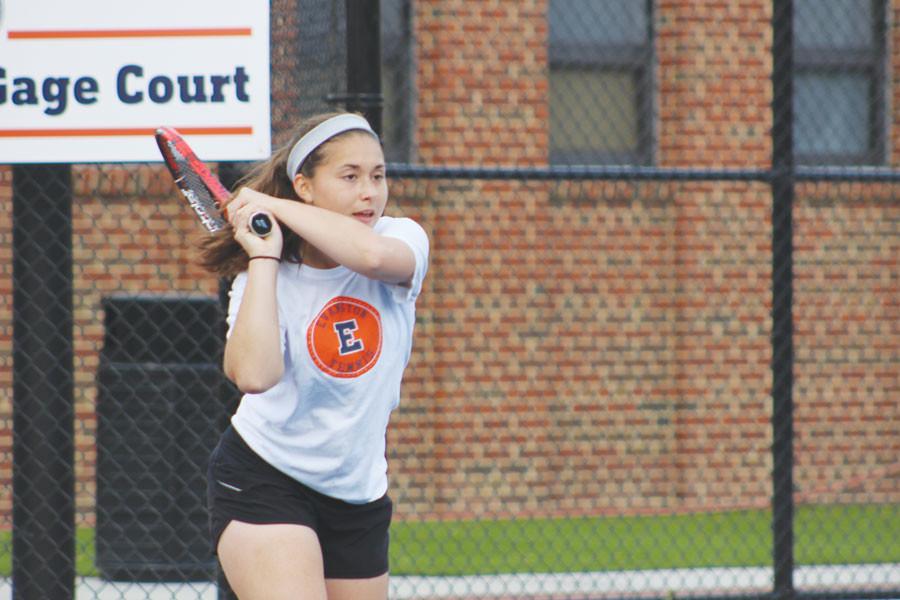 Girls tennis has served up another successful season, beating some of the top teams in their region, and sending two girls to state.

“I think this season we have grown mentally and as a team,” said senior captain Jessica Ampel. “We’ve won more matches in third set tie breakers and pushed matches to third sets because players have refused to give up.”

Mental strength and good communication is the secret weapon that helped seniors and co­captains Abbey Moore and Jessica Ampel earn back­-to-­back wins against Loyola and North Shore Country Day on Oct. 16 at the Niles West sectional. The girls’ 6­-3, 6-­4 win over Loyola snagged them a ticket down state.

“Doubles is a complicated strategic game, especially when you are playing against girls who have been playing the game since they were five years old,” said coach Joyce Anderson. “Abby and Jess have been communicating better and trusting each other more.”

“They have really come together as a team and played better strategically as a pair, allowing them to beat better teams.”

After the first wins at the sectional tournament, the girls suffered a disappointing 6­-2, 7­-5 loss to New Trier, pushing them out of the semifinals. The girls finished the tournament with a fourth place finish, the team with a total of six points placed seventh overall.

“Even though we won, we were disappointed because we didn’t play our best­­,” explained Moore.

The state meet was held on Oct. 22 and 23 at Buffalo Grove High School. The girls advanced to the fifth round, earning them a top 30 spot in the state.

“Throughout the whole time our coach told us that we just need to leave everything on the court, and I think we did that,” said Moore. “We played really well, and although our last match was a loss, it was a match we were proud of. It was a great way to end our high school tennis careers.”