Boys golf gears up for Wheeling and Mundelein Invites 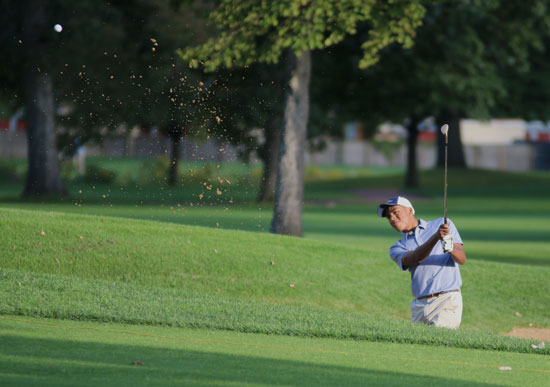 Robert James chips the ball onto the green during a game against New Trier.

Despite a series of inconsistent showings to start the season, boys golf hopes to have a strong showing at the Mundelein and Wheeling invites this weekend.

“Committing to routine, staying in the moment, and not obsessing about score will be key for us this weekend,” said coach Jed Curtis. “I’m looking for the boys to put something together and play to the best of their ability.”

Despite a solid lineup from top to bottom, the Kits have struggled to find consistency. “We have a pretty solid lineup when we all shoot well, said senior captain Dylan Thompson. “We have the capability to go low but no one can shoot a consistent score each time we play.”

Evanston is scheduled to face schools including Niles West, Maine South, Libertyville and a strong Lake Forest squad at the two meets this weekend.

The Kits have also been dealing with the difficult task of replacing 5 seniors, including former state qualifiers Sam Knepper and Bill Nondorf. The process has been made easier with a new class of seniors has stepped up into leadership roles, including Thompson, Nick Lydon, Ethan Stein and Rob James. All will be key to strong performances at Mundelein and Wheeling this weekend.

Several juniors and sophomores round out the rest of the team, giving the team depth and healthy competition for starting spots.

An early season surprise has been sophomore Matthew Barbato, who shot a 74 at The Den, earning himself fifth place of 132 golfers. The Den is the course where the state tournament is held every year, and was the site of the team’s first meet of the season, the Raider Invitational.

Barbato was the only golfer to break 80 while senior Nick Lydon shot an 83. Stein and junior Jordan Wallace both shot 87s giving the team a score of 331 and a 10th place finish overall out of 22 teams.

Following the invites this weekend, the boys will take on Niles West at Wilmette before some tough match ups against Lake Forest and New Trier.

Despite the difficulty of the upcoming schedule, team morale is high.

“It’s a great group of guys and we always get the best out of each other. I expect us to put it all together soon. Everyone is starting to get pure,” said senior Charlie Evans.