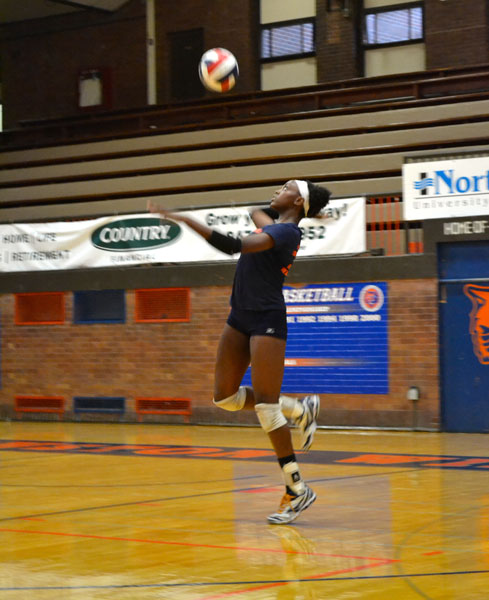 “Lane Tech is one of the most competitive teams in the CPS. We’re hoping ETHS students come out and support us like last year,” said coach Pam MacPherson.

The Kits crushed the Indians in last year’s season opener, beating them in two sets 25-12 and 25-22

The girls come into the season having gone through intense preparation throughout the offseason. Many of the girls went to volleyball camps and played pickup games with each other.

“After my club season ended in June, I started to do training camps at Northwestern and ETHS, along with open gyms and playing at the beach with girls on the team,” said Caitlin Sweeney, junior.

The team will look to improve on last season, when they lost in two sets against Loyola in the sectional semifinal to end their season.

Despite the loss of seven seniors from last year, this year’s team looks just as strong, with coach MacPherson calls this years graduating class “one of the strongest senior classes we’ve seen.”

The Kits will lean heavily on senior captains Ruby Smith and Sarah Bogan, who will provide experience and leadership to the younger players. Seniors Ehize Omoghibo and Nastassja Litinsky will also be impact players, both having recently committed to play at Central Florida and Wesleyan, respectively.

With the season still young, the team will have to take some time to get used to the new players.

“The most important thing for us is learning how to play with each other and connect with each other so that there’s no hesitation when it’s time to play the ball and push to win the game,” said Bogan.

After the match with Lane Tech, the Kits head out to Libertyville where they’re taking part in the Libertyville Invitational. Libertyville, the state runner up last year, will offer a competitive start to the season for the Kits.

“There’s great competition out there. Senior leadership will be key in order to get off to a good start on the year,” said coach MacPherson.