Rodney K. Lowe: The man who brought The Evanstonian to life 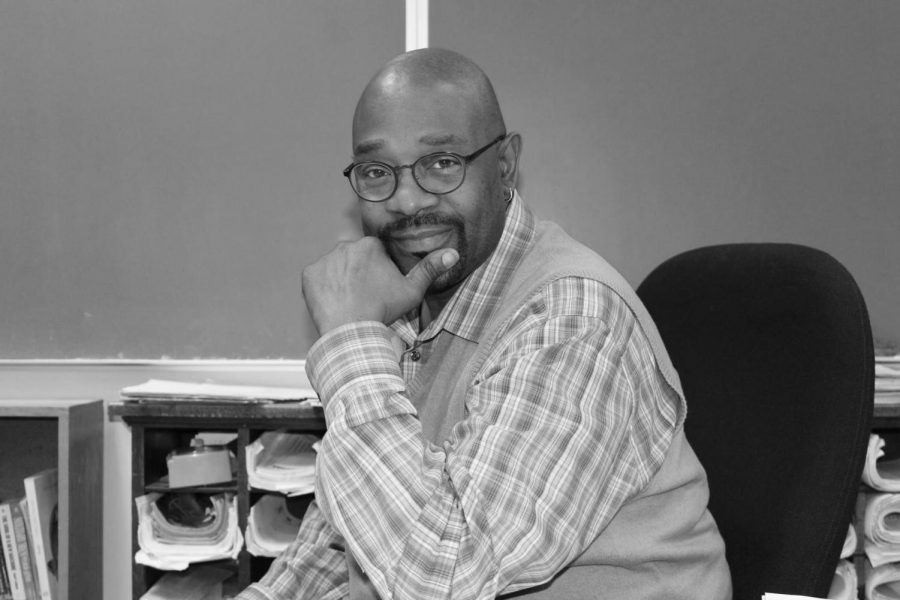 Mr. Lowe sitting behind his desk.

On the first day of each semester, a fresh batch of students made their way into a classroom on the first floor of Evanston Township High School’s south wing.

While these 20 or so students were worn out from a full first day of the new semester, it did not take long for the teacher in room S105 to take their eyes away from the ticking clock, and onto him, as the tenured teacher had a knack for commanding a classroom’s attention.

The class was Introduction to Journalism — a popular elective course among freshmen looking to become a part of The Evanstonian, the storied, student-run newspaper — and the teacher was Rodney K. Lowe.

For the next 42 minutes, Mr. Lowe introduced himself, the subject of journalism and his expectations for his newest class with the gusto that only he could bring to a classroom at the end of a long school day.

Mr. Lowe began by walking to the door and shutting it as the classroom quickly turned quiet. “Hey folks,” he began as he would begin nearly every class for the rest of the semester. This, however, was the only thing about this first class that would remain consistent for the remainder of the year as the first day of Intro to Journalism was one no student ever forgot.

Mr. Lowe spent the entirety of the class period bluntly explaining the contents of the class: the books students would read, the current events competitions students would spend hours studying for and the projects and articles students would have the chance to create. Mr. Lowe did not gloss over the facts of the matter on that first day: he expected a lot from his students and this class was not going to be a walk in the park.

For many, Mr. Lowe’s stony demeanor, lofty expectations and demanding syllabus were too much. They ran to the counselors’ office as soon as the bell rang and begged to drop out of the class. But the counselors, like Mr. Lowe, had been through this exact situation before and told their students to go back the next day and see what happened.

While some students were afraid, others were invigorated by Mr. Lowe’s intensity and were ready to answer his call to work harder than they ever had before, push themselves out of their comfort zones and stop being afraid to fail.

When students re-entered S105 the next day, nearly everything was different. Well, the posters covering nearly every square inch of wall space, his desk with papers inexplicably sprawled every-which-way and his chair that he would use to roll from one side of the room to the other were all still there; but the energy was completely different and all of that came from Mr. Lowe.

On that second day, Lowe’s energy was on full display. He cracked jokes with students as they entered and played music, likely “Loveland” by Charles Wright and the 103rd Street Rhythm Band, his favorite song, from his computer tucked in the back corner of the room.

Over the next months, students gravitated towards Mr. Lowe’s energy and thus The Evanstonian, which was the most visible and enduring extension of him at ETHS.

“Mr. Lowe, for 30+ years, WAS The Evanstonian,” 2017-18 Executive Editor Michael Colton said. “But to say that The Evanstonian defined Mr. Lowe would be a gross understatement.”

Mr. Lowe spent a total of four hours driving to and from ETHS each day, sometimes not getting home until after midnight. He was committed to his students but also to his family. His constant care for his mother was clear.

Mr. Lowe was also a mentor and a role model to many of his students.

“By my junior year, I found my voice in opinion writing,” 2017-18 Opinion Columnist Carrington ‘Onyx’ York said. “Lowe reminded me to be unapologetic yet responsible with my writing. As a Black woman, I would learn to apply this delicate balance to almost everything in life.”

Mr. Lowe believed in his students even when they did not believe in themselves. He was their biggest cheerleader while also being their toughest critic.

Katy Donati, a 2017-18 Executive Editor, remembered in vivid detail the experience of first submitting an article to Mr. Lowe.

“[My article] came back from Mr. Lowe covered in red pen, messy scribbling all over the page, paragraphs crossed out. I had maybe one sentence of my own left to work with. I was discouraged and ready to quit. Mr. Lowe knew that. He was ready for me, and he was not going to let me give up that easy. With the blunt, sassy positivity I would come to know and love, Mr. Lowe sat with me to help me edit that piece into a passable story. He did that piece after piece, pushing me to dig deeper, helping me find what I did not know was in me. He pushed and prodded me from sports to features and in-depth,” Donati said.

This was the experience for many students looking to becomes writers with Mr. Lowe and The Evanstonian. He was tough, especially on that first article, but it was all because Mr. Lowe always had a plan.

“I can honestly say that I have never understood Mr. Lowe’s vision more than I do now,” Carrington, who is currently a B.A. Journalism candidate and mentor to first-generation college students, said. “His work planted the seeds for my work to grow, and for that, I am grateful.”

Over Mr. Lowe’s 31 years at ETHS, the school around him changed tremendously. He watched superintendents and principals come and go, wings of the school be renamed and rebuilt and thousands of students pass through S105, graduate and eventually return to thank their old adviser and friend for all he had done for them.

The fall of 2017 was Mr. Lowe’s last semester at ETHS. Per usual, he taught two Advanced Journalism classes as well as two Intro to Journalism classes, still dedicated as ever to guiding young students in the world of journalism. Throughout that final semester, Mr. Lowe’s students would hope for the same thing every day when they walked into S105: for Mr. Lowe, and his infectious smile, to be sitting behind his desk, spinning in his chair.

During much of Mr. Lowe’s final stretch at ETHS, his students were often met with disappointment because of the fact that more often than not, Mr. Lowe’s chair was empty and the classroom was missing his energy.

Due to recurring health issues, students were not given the opportunity to spend as much time with him as they would have in a typical year, but when Mr. Lowe was able to make the long commute from Michigan City, Ind., his presence could not have been more felt.

When present, Mr. Lowe could not be any more animated, even though he had every reason to be deflated. Aside from the occasional joke about his doctors “drugging him up,” Mr. Lowe did not discuss his health with his classes — he simply did the same thing he had done for the previous 30 years: put his students first.

Mr. Lowe always left a gleeful effect on the room, even when the love he was delivering was brutally honest. No matter the topic, assignment or discussion, Mr. Lowe made class both enjoyable and productive.

While he always brightened the room, there was no day that compared to Jan. 12, 2018. After 31 years of blood, sweat and tears poured into this publication, the one built by Rodney K. Lowe, a monumental chapter of his life, one that lasted over half of his life, had reached its ending.

Reading this issue, it is clear that Mr. Lowe’s legacy did not end that day, when he left The Evanstonian’s office for the final time as adviser. For all the time that Mr. Lowe spent prioritizing others, Jan. 12, 2018 was a day for celebrating him.

Colleagues came flocking to S105 to say their goodbyes and give their well-wishes. The only way to describe the feeling in the room was melancholic — Mr. Lowe was not only overwhelmed with the love of his co-workers, students and former students, but also grappling with the fact that his time as adviser of The Evanstonian was finally coming to an end; an end that meant Mr. Lowe would no longer be driving four hours each day to teach students about the art of journalism; an end that meant Mr. Lowe could finally be with his mother more a frequently; an end that meant Mr. Lowe could finally live as comfortably as possible with his ongoing health concerns; and lastly, an end of an era — an era in which The Evanstonian went from a publication to a family, where hundreds of former students can come together to share their mutual love for Rodney K. Lowe.

As the final group of students left S105 that afternoon, he smiled.

And all the while, Mr. Lowe just sat in his chair behind his eternally messy desk, spinning. Spinning and smiling.