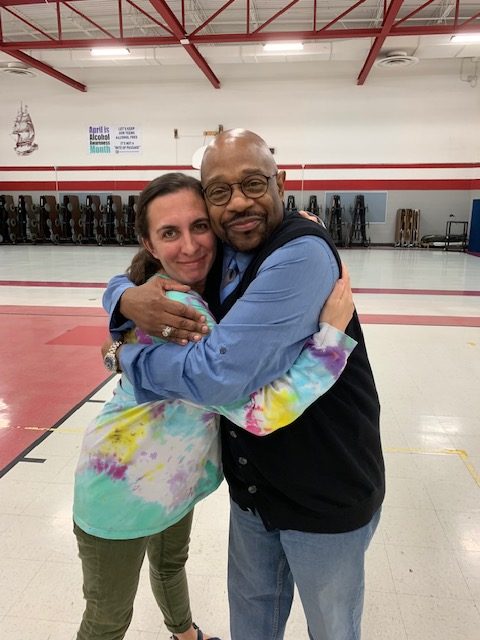 Lowe and Young at an IHSA Journalism competition in 2018 — and the famous “big Rodney hug.”

When Rodney and I first started teaching together,  I’m sure he thought I was an annoying new teacher with bright ideas that he didn’t need.  So, I did what any new teacher did, and I tried to make myself useful and I started cleaning The Evanstonian Office.  In doing so I found a pair of his shoes in a drawer and thought to myself, what in the world is going on here?  Why does this man have shoes in his drawer?  Does he live here? — And let’s be honest, this place was his life, his home away from home. He spent 5 days a week at work and was coming in on the weekends. This place was his life.

Rodney loved to win.  For a long time, I’m pretty sure our award ceremony was about 80% Evanstonian.  We worked together making The Evanstonian and for many years competing at the IHSA Journalism competition.  We were Pacemaker finalists and Pacemaker winners.  When we were state runner’s up, that was not enough.  Rodney and I strategized how to win it all the next year.  The next year our staffs (newspaper & yearbook) took state, and the elation on Rodney’s face to win a trophy that was the size of a small child was unforgettable, pure joy.

As the years went on, we found ourselves on many adventures.  We drove together in those large vans to St. Louis and Nashville for National Conventions with students.  Rodney drove the bus to state, always hilariously struggling with the alarms on the bus every year, while the students made their jokes about it. I am sad that I was not able to go down with him the last couple of times because Rodney was worried I’d be giving birth on that small bus, and let’s be honest that worry was valid, but we did laugh about it.

We also enjoyed sharing stories about life beyond these walls at ETHS.  From Rodney’s move to Michigan City to caring for his parents, who Rodney adored. His sister would always be there to help him find his latest car for his 2+ hour commute.   He cared deeply about his community outside of school delivering food for Meals on Wheels, which also made for some interesting storytelling. He enjoyed playing pool when he had time away from the paper. When you had good news to share with Rodney, a birth, marriage, etc., you always got a big Rodney hug.

Even though we did not work together on The Evanstonian during his final years at ETHS, there was always a place for me on the couch in S103.  He understood my job like no one else in the building ever could, we were both running student publications. He took on the challenge of producing a paper and fighting for students’ rights to the freedom of press, taking that all the way to the School Board.  He cared deeply about the paper until the end at ETHS. I will miss that space on his couch. I’m not sure that we will ever fill those shoes I found in the drawer when I first started in S103.