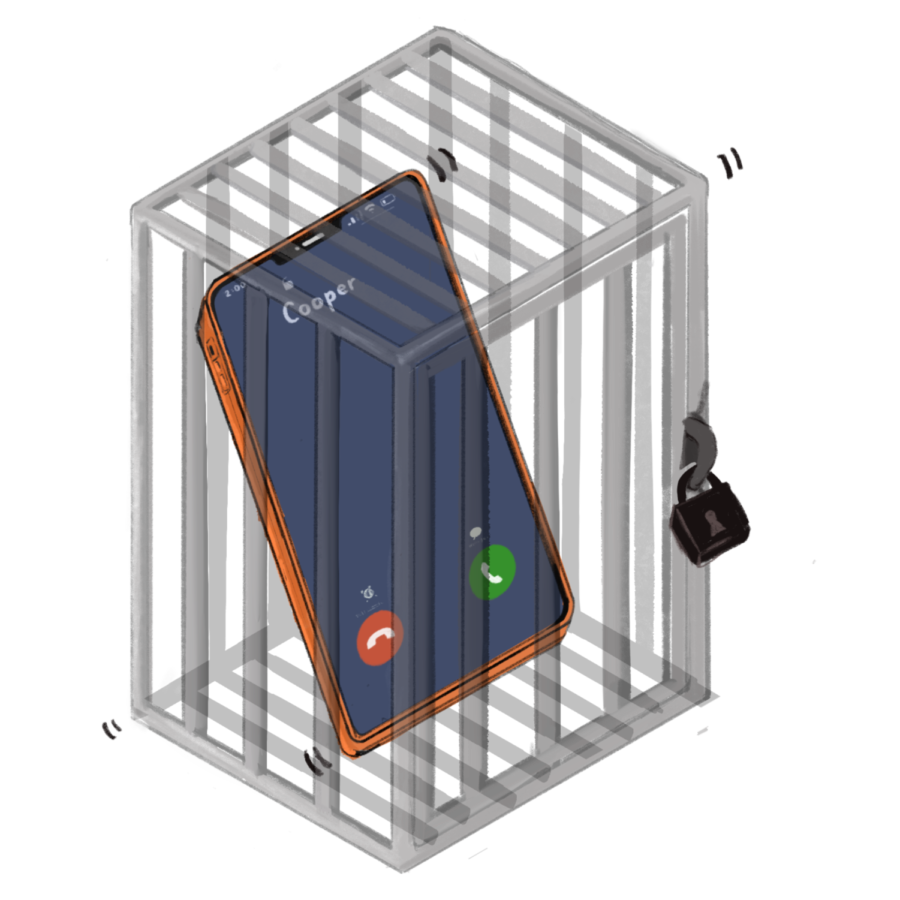 Whether it’s spent watching Netflix from the comfort of a bedroom or working on calculus problems, 85 minutes is a long time to focus on anything. For ETHS students, this inability to focus is exacerbated, as they are expected to go class to class—studying topics that vary from fashion design to mechanical physics—all with little to no break in between.

Up until this year, when students inevitably felt disengaged from class, they had the ability to simply take a break and use their phones. Now, it’s the complete opposite: phone usage is prohibited within the classroom—putting students in a position where they feel disinterested and overly regulated during their class block.

“It doesn’t take a lot of people’s situations into account, because some people have stuff going on at home or family stuff, or people just can’t pay attention for 85 minutes straight,” junior Erin Doherty notes. “They focus more on punishing us and don’t seem to think about why we’re on our phones, and it’s just really strict for no reason.”

One study from the Journal of Chemical Education in 2010 found that students begin to lose attention after just two minutes of a class lecture, and 10-20 minutes later, they likely lose it altogether. Meaning, it’s literally impossible for students to stay fully engaged during the entire class block of 85-minutes if they aren’t able to check out for a moment and take a mental break.

In the real world, there is no boss or college professor prohibiting students from using their phones—there’s just the young adult and their ability to self-regulate phone usage. If high school is truly about preparing students for adult life, then ETHS should focus on teaching students strategies to stay attentive and off their phone, rather than just completely banning them.

In fact, for some students, phones can even serve a purpose to increase focus. Junior Zion Williams-Rauze explains that his phone is an important tool to help manage his ADHD.

“It’s case by case. With me, my phone is kind of there for me to fidget with,” Williams-Rauze says. “Or, I’m normally listening to music because it helps keep me focused on certain things. Whereas, if there isn’t music or a phone there, sounds in general will just distract me in that set up.”

Thus, even in the most interesting of classes, students will still feel an urge to use their phone. Instead of punitive measures that work to make learning even more difficult for some, ETHS should look to implement mandatory breaks during the class block—allowing students an opportunity to use their phones without distracting from learning.

“I’m usually more focused in class if we have a break. I won’t feel like I need to go on my phone, but not allowing phones in class altogether doesn’t really have the same effect,” junior Chloe Wagner agrees.

However, this problem doesn’t end with a ban on phones inside the classroom. Per the student handbook, the new policy also gives safety the power to search students’ phones if, “there exists a reasonable suspicion that it may have been used in an activity prohibited by the Student Behavior Code.” Now, the privacy and integrity of students are in jeopardy.

“I think that it’s super invasive, and I didn’t even know about it. Teenagers should have a right to privacy, even when we’re in school,” Doherty says. “Even if you are breaking a school rule, why would you write it down on your phone? It doesn’t make any sense.”

Besides putting student privacy at risk, the policy additionally fails to give guidelines as to what “reasonable suspicion” might entail. Almost anything could be justified as “suspicious,” which might further endanger the safety of students and contribute to profiling.

“There are already problems with safety and ETHS profiling kids, and if they have that power, they might over use it based on their own bias,” Cochrane concludes. “Honestly, I think something like this should just be illegal.”