Opinion | WiSTEM pushes back against sexism in science 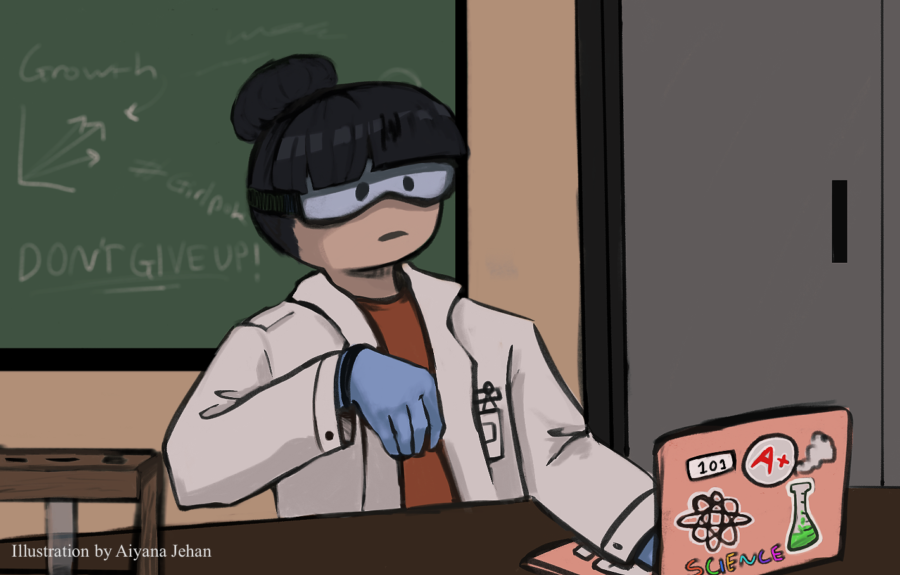 Throughout history, women have been underrepresented in STEM jobs and fields. Numbers of women in the STEM workforce have been on the rise, but progress has been slow, and according to the U.S Census, as of 2019, 73 percent of STEM jobs were dominated by men. Not only are women seen less qualified in the field, they are also often treated unfairly or differently than their male counterparts; an entry-level salary for a man is $4,000 higher than one for a woman of the same credentials in the engineering and tech fields, according to a study the Stanford Graduate School of Business conducted.

It’s important to know that programs for Women in STEM have been ongoing in schools and universities for well over a decade. So why has progress been so slow, and are these all-female programs and environments helping?

ETHS has offered Intro to Engineering and Design and Intro to Programming as all female classes (along with the original coed classes) for six years now. Since these classes have been offered, interest from women has continued to grow, and they’ve recently doubled in size.

The class is taught by Career and Technical Education teacher Cindy Curtis, and although the curriculum and teaching style for both the all girls and the co-ed class are exactly the same, Curtis describes important benefits from her all-female classes.

“I think it’s that level of comfortability, that level of ‘If I don’t understand what’s going on, I can ask anybody in here, and they’ll be willing to help me.’ [People] don’t feel like ‘If I do something wrong, somebody is gonna make fun of me or not want to include me or not want to hear my voice?’ So that’s what I have seen.”

Curtis has faced challenges of her own as a female in the predominantly male world of STEM.

“When I was hired on my first job, I had to go through a several step process of validating my knowledge. Because they didn’t believe that I could do [the job]. Which of course I did. And they hired me.”

ETHS also offers a WiSTEM club, run by Kirsten Perkins. While the club may be based off of interest in the STEM field, a participant doesn’t need to be fully committed to a STEM career to join. Meetings are not mandatory, and can be attended whenever one pleases. The real purpose of the club, according to Perkins, is to create community. The club creates an affinity space for young women and others who feel they are underrepresented in STEM. Spaces like these allow participants to reflect and converse openly about common interests and issues they face in an environment that is both comfortable and safe. The club is also open to and inclusive of non-binary students and transgender women.

So while we know affinity spaces are vital for progress within women in the STEM field, there are still questions about how these environments impact people with different identities.

“I hope [boys] don’t feel attacked. I hope that boys don’t feel threatened by the existence of our women in STEM group. If they do, that’s work that they need to do. I don’t see that as work that WiSTEM or women need to do to help them sort through that,” explains Perkins.

So no, the purpose of all female environments such as the WISTEM club is not to attack boys or men but, rather, to create an environment where people of a common identity can build the confidence needed for environments where they are underrepresented; environments like the STEM workforce. It’s important to note that girls within this group are already working towards equal representation and opportunity, so the perspective on these groups from others isn’t a priority for females involved in WISTEM.

It’s women who are oppressed in the field, and there isn’t time to worry about how those not involved feel when so many are working to increase female representation and help women be seen in a world that has prevented them from changing the status quo for decades. It’s not men we’re pushing back against, it’s the system that has been created and put in place for far too long.

“What we need to be doing is coming together as a collective and looking at this system and saying, ‘How do we push back?’ So it’s not about pushing back against men? Right? It’s about examining and critically questioning the system that is in place. Historically, that system has privileged men,” says Perkins.

Being in an affinity space or a group of people that share a common identity can help girls to gain the confidence they need in order to thrive in the male dominated STEM world. In order to truly progress though, we need to go beyond women supporting women or those underrepresented in STEM supporting one another.

“What we need to be doing is coming together as a collective and looking at this system and saying, how do we push back? So it’s not about pushing back against men? Right? It’s about examining and critically questioning the system that is in place. Historically, that system has privileged men,” says Perkins.

So why does WISTEM exist? The simple answer is: because it has to. There is longstanding bias within the STEM field that has historically oppressed women and benefitted men, and the causes of that are rooted deep in American society. For women in STEM to succeed long-term, we must translate the success of classroom programs to the outside world. Awareness and support from the broader community will ensure equal opportunities and success for women in the decades to come.