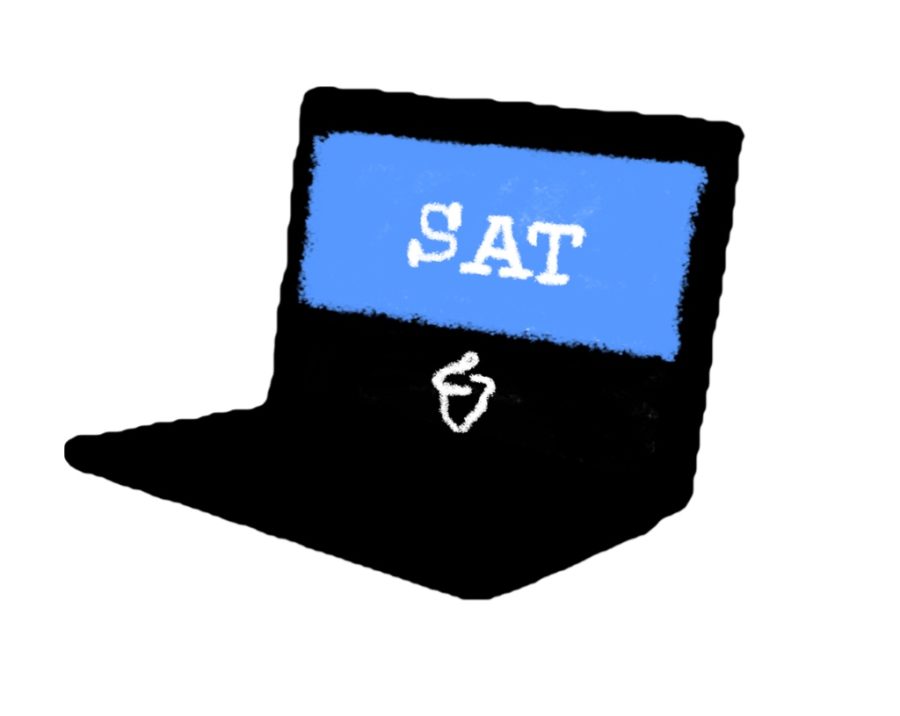 For generations of high schoolers, the SAT has been something to dread. For many, spending hours answering questions and then painstakingly filling out over 100 tiny bubbles with a pencil was the only way to get into their dream school. Now, that’s beginning to change.

Earlier this year, it was announced that the College Board would be making the SAT test virtual starting in 2024. What does this mean? Firstly, the tests will still be taken in proctoring centers, but on computers. They will also take two hours, instead of three, since they’re focusing more on adaptive learning—questions that adapt to a student’s answers as they progress through the test. These changes, along with the fact that many colleges and universities are going test-optional, will create positive change for future SAT takers.

“People put a lot of stress on how [the test] affects your future,” freshman Eleanor Granstrom, comments.

“Having to erase and redo your answers would be much easier on a computer,” Granstrom explains.

While this may seem like an irrelevant concern, filling in over one hundred tiny bubbles with a pencil is tedious and time-consuming. With a virtual format, the multiple choice questions will be much easier to stomach and much less tedious and confusing. Another seemingly unimportant yet incredibly impactful change is the shortening of the test. An hour’s difference goes a huge way; a two hour test will be more equitable and less mentally taxing than a three hour one.

While the tests will still take place in proctoring centers, the questions will be on computers. They will also be much shorter and tailored to each student’s progress, cutting the test time down by over an hour. This will certainly be less mentally taxing for students, especially those who have shorter attention spans. No one enjoys sitting silently in a stuffy room for three hours, so it’s great that the test is becoming shorter.

Not only will virtual SATs be less painstaking, they’re also going to be more user-friendly for students. After spending 2020 in remote learning, students have grown accustomed to taking tests and submitting work virtually. The MAP, STAR and PARCC tests—standardized tests used to measure students’ progress throughout their school careers—are all administered virtually, so an on-paper SAT could potentially be jarring to some.

“I feel like the more research that comes out, the more it seems like standardized tests just aren’t the most accurate measurement of student aptitude,” junior Ayla Conn reflects. This hits close to home for many students. Test scores are often used to assess and scrutinize a student, even though they usually aren’t reliable measures of a student’s intelligence and work ethic. The SAT going virtual, paired with the fact that many colleges are planning to stay test-optional, will provide more opportunities for students who don’t test well.

“I have friends who are very strong students, but just don’t perform on standardized tests,” Conn continues.

According to University of Texas Associate Professor of Educational Leadership and Policy David DeMatthews, “Negative consequences [of the SAT] include…stigmatization of students and schools as failing or in need of intervention based on faulty interpretations of what test scores actually mean.”

Essentially, this stresses the idea that students who do poorly on standardized tests are harshly judged based on their performance, which is completely unfair. Students with tons of potential are often looked down upon because of their SAT and ACT scores, which is part of the reason why test optional policies are so advantageous. Many universities implemented these policies due to the COVID-19 pandemic, but many are contemplating whether they just should stay in place.

“Left on our own, I think we’ll go the way of the University of California system and either be completely test-optional or as far as score-free for a long time to come,” said Jonathan Burdick, who oversees enrollment at Cornell University, in an interview for Bloomberg.

This is great news for many students who scored poorly on the SAT or simply chose not to take it. Many students don’t have the time or resources to properly prepare for the test, so letting students apply based on grades, extracurriculars and community involvement will provide more opportunities to a diverse range of people.

The SAT has been in place for so long that the College Board had become out of touch with the ever-evolving standards for student success. After the COVID-19 pandemic and the decision that many colleges would become test optional, they decided to change in order to accommodate some of these standards. The fact that tests will be shorter, virtual, and optional will open doors for many students, especially those who have anxiety surrounding test taking. The future of standardized testing, while still relatively uncertain, seems to be focusing much more on equity and student needs. This will undoubtedly help many high schoolers achieve their goals in future years.