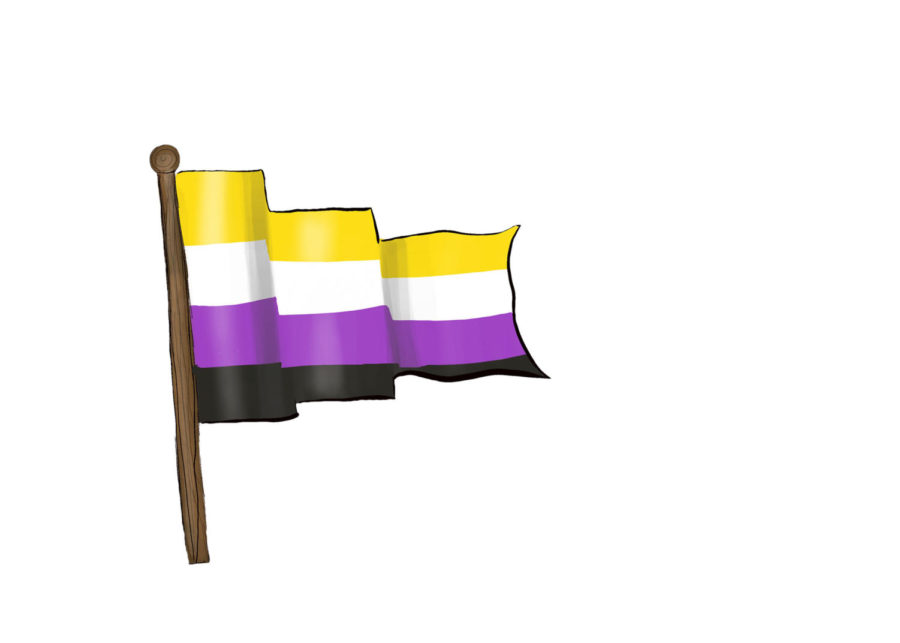 At the beginning of the year, I was excited to get back to school. Online learning was a nice break, but quickly got annoying. I wanted to see my friends, and I wanted to talk to people I didn’t know. Most of all, I wanted to be back in person.

But, even with that urge, there was some part of me that was terrified. I was scared of how I was going to introduce myself for the majority of the summer. I was in the closet as trans, and I was distraught at the idea of having to introduce myself with the wrong pronouns and a deadname. This had become a recurring issue since I realized I was trans. I simply didn’t feel safe, to be honest, but hated myself when I lied, and the school didn’t help. In fact, the current trend among teachers of introductory pronoun circles hurt me, as this classroom activity puts closeted trans and questioning students in a position that can cause potential psychological or physical harm.

Right now, we have a social norm in ETHS, enforced by teachers, that when someone asks for your pronouns, you have to give them. They are required on every survey and ‘get to know you’ game, and you literally can’t skip it. Most surveys force you to gender yourself and if you try to skip over your pronouns, most teachers will just ask you them outright, putting you on the spot. Among the closeted and questioning people, I know this event is dreaded. It effectively puts you in two positions: lying and enforcing the perception of yourself as the gender you were assigned at birth, or outing yourself, possibly opening yourself up to a barrage of unsafety.

It’s self-evidently true why it’s harmful to have trans people out themselves, in a world where it’s dangerous to be trans. We shouldn’t force people, particularly people in the most unsafe situations, to tell the world they are trans. When talking to people about this, however, I feel like we oftentimes don’t really understand the harm that lying about one’s identity can have. Personally, to truly internalize that impact, I have to remember how it impacted me.

Remembering the times that I had to deny my true identity and also empower the perception of myself as a man, cementing the idea of my masculinity in everyone in that room. I tried to avoid it. I didn’t want to misgender myself, but when I am directly told by my teacher to spread a lie about myself, I have to just suck up the inner humiliation and despair.

It’s not just me; misgendering has a demonstrable negative effect on the mental health of trans people. According to a paper written by Kevin A. McLemore of the University of California, published in Self and Identity, a world-renown Psychology Journal, most peer-reviewed English language studies of misgendering demonstrate a correlation between misgendering and a slew of negative mental health effects, including lower self-esteem, higher rates of depression and an increase in suicide and self-harm. Now, imagine what happens when we force students to misgender themselves, when we force students to be the catalyst for the misgendering that causes the psychological violence they face. It seems pretty clear that, at the very least, we run a risk of intensifying the negative effects of misgendering when we force people in the closet to do it to themselves.

These dangers leave teachers in a difficult position, having to walk a tightrope between encouraging the expression of students’ gender identity and keeping students safe. Unfortunately, teachers often fail at providing either. Maisy Kobernik-Pollack, a senior at ETHS who uses they/them pronouns and identifies as gender fluid, told me that, “If [my teachers] did include pronouns, it would be really awkward.” They also told me that even in these spaces, there was a sort of stigma against not using the “normal” pronouns.

It is also important to recognize that not all teachers give students the option to share their pronouns. Personally, I’m in a number of different classes that didn’t give me the opportunity to inform my classmates or my teacher that I am woman, and as a result of that, I am often misgendered in those classes, feeling powerless to stop it. In a particularly problematic instance, Maisy told me about a case where their teacher instructed against students sharing their pronouns. While this may seem preferable in some instances to forcing students to choose between outing themselves or being misgendered, it’s crucial to remember that, when you deny students agency in this decision, however difficult it may be, all you are doing is making the choice for them, possibly endangering their lives if you chose wrong.

There are better systems out there that ETHS can use. For example, we could use the ASL (American Sign Language) model. ASL classes at ETHS ask for both the pronouns and names a student used at home and the ones used at school. This is designed to make it so students can be out in the open with their teachers and other safe environments, but during parent teacher conferences or other communication between parents and teachers, a student’s old name and pronoun is used if they request that. This makes the cost of outing yourself significantly less, because there is less of a probability of a possibly transphobic parent learning about a student identity because of their actions at school. Alternatively, we can have teachers stop putting people on the spot with their pronouns and, in introductory surveys, we could include a ‘prefer not to say’ option, which reduces the likelihood of closeted students being forced to out themselves or lie about thier identity.

While these solutions may reduce the harm that can happen to students, this harm is inevitable with our current gendered system. Even if we adopt a ‘prefer not to say’ option, we still allow students to be constantly misgendered and, even if we adopt the model used by ASL classes, we still run the risk of a teacher slipping up or information moving naturally through students, resulting in other students getting outed. There is no escape from this problem, because there is no escape from gender, especially for someone in the closet.