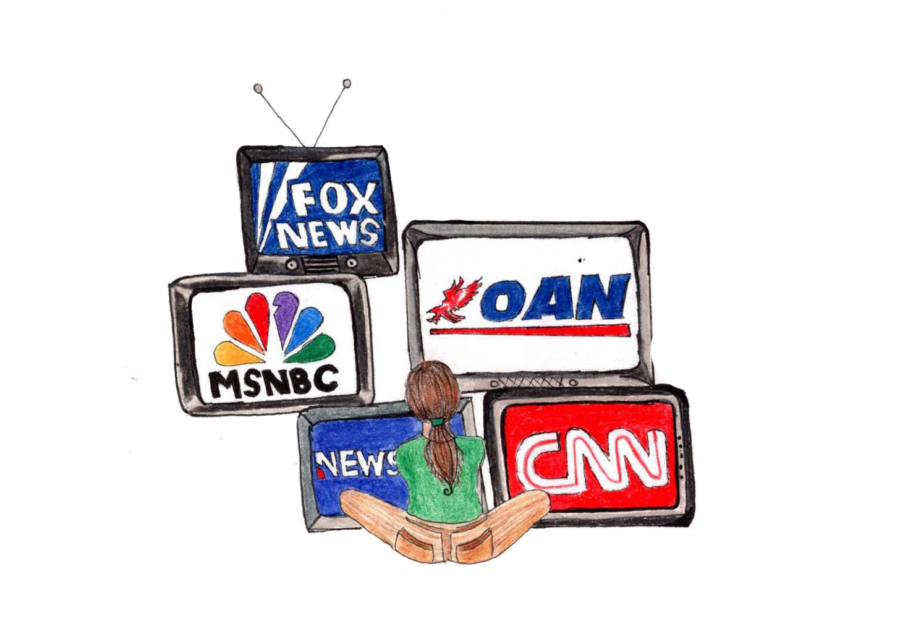 “I think a lot of the news is designed to get your attention in the worst way possible,” says senior Oliver Pratt. These words resonate with a lot of the American population in a way that presents itself now more than ever. In a time where staying in tune with the news appears to be critically important, our news is well… horrible. To the majority of Evanston, what Pratt also refers to as a “liberal bubble”, these horrible news sources would be Fox News, OAN, Newsmax or other conservative cable news outlets. While these beliefs of absurdity regarding the aforementioned right-wing media institutions may be completely accurate, much of Evanston (or any majority liberal community for that matter) stops short of analyzing and critiquing their own liberal media sources.

According to a Pew Research Center study, meant to analyze Americans’ trust in news sources that aligned with their political beliefs published in January of 2020, 70 percent of self-described liberal Democrats trusted CNN. So it isn’t a stretch to assume that a similar percentage of Evanston liberal Democrats feel the same way about CNN or other left-wing cable media outlets, however, such trust is misguided. Major liberal cable media news outlets pander to their audience in many of the same ways that conservative news sources do, and understanding these strategies is essential for Evanstonians to question the power structures around them, even if they correspond with their same political party.

Cuomo Prime Time is a CNN news show that airs during the “prime time” evening slot when most people are watching TV and is hosted by Chris Cuomo. Cuomo’s repeated usage of the phrase “ReTrumplicans” (a combination of “Republicans” and “Trump” meant to signify their intertwinement) seems to educate his viewers on absolutely nothing. It is obvious enough how closely tangled together the GOP is with Donald Trump and making it into a catchy phrase serves not to do anything but demonize.

And that is it right there, the same kind of misplaced demonization that can be seen on Fox News towards liberals, is seen on CNN as well. Sure, what Cuomo is complaining about and demonizing Republicans for has more of a basis in fact than what conservative media outlets demonize liberals for, but, at the end of the day, the same hyper partisan tactics are still being used. Whether Cuomo is rambling on about the vague and undefined “ReTrumplican” or Tucker Carlson is fear mongering about how “the left” is trying to take away some intrinsically American freedom, neither strategy serves to educate their viewer, and instead just misleads and confuses the audience.

However, when you think about it, it really starts to make sense. Cable news-media outlets don’t have to educate their viewers to earn money; they just have to make their audience want to tune into their channel again. After all, it is what earns them profit and without profit there is no hope for any cable media channels survival. What makes an audience want to tune back into a CNN or MSNBC is if they like what they are watching. What better way to make someone like watching the news than having the news pander to them directly? Liberals love being reminded by the news that they are not like their opposition, the dumb, evil, ReTrumplican. They are the sharp, just, logical and superior liberal, and they will be tuning in again tomorrow to earn CNN even more money. This kind of pandering towards Democrats can be seen beyond Cuomo Prime Time, and you can find it yourself pretty easily.

Liberal media making conservatives out to be laughable characters has backfired on them in the past and will in the future. When Hilary Clinton got on stage in the run up to the 2016 election and declared her opposition to be a “basket of deplorables” she made one of the moves that cost her the election. Not only were those on Trump’s side who were willing to consider the perspectives of the Democratic party now solidified in their support of Trump after being called a “deplorable,”but the term itself became a rallying cry and campaign slogan for conservatives that continues to this day. One cannot help but notice the similarities in tone in Clinton’s godforsaken speech that night, and the way people like Rachel Maddow and Cuomo make conservatives out to be. This kind of anti-Republican pandering also makes liberals out to be better than they really are. Because when the republicans are decrepit, sorry, and misguided as they are, the liberals must be the antithesis of such evil, except for the fact that they are not. Much of the mass incarceration of Black and Brown people present within the United States today can be attributed to laws introduced during the democratic Bill Clinton era, and much of the brutal regime change practices that this country has levied against the global south has been done during the Obama and now Biden administrations. These facts are often forgotten by most liberals though, as liberal media leaves little room for valid criticisms of democratic party policy.

The American media has a responsibility to those who view it and the nation as a whole to be accurate, intelligent, informative, and while not without some partisanship, fair. Unfortunately, such hopes could not be further from reality, as news on both sides has been overrun with uninformative pandering. News sources pandering to their audience will always exist as long as the need for a profit to be made is present. This article is not meant to demand that all news sources drop all bias and report without any hint of opinion, rhetoric, or passion, to do so wouldn’t be feasible or realistic. This article is just a simple request to look critically at the ways news is presented, especially if the broadcast doesn’t challenge any of your views or make you think critically. America’s news won’t inform you, that parts up to you.