Why Illinois’ Fair Tax Plan needs to be passed

It feels like we’ve been preparing for this year’s presidential election forever. From debates starting in July of last year with numerous candidates throwing their hats in the ring to only a couple months away. We’ve been constantly encouraged to make our voices heard in the electoral process, picking a president in order to sustain our democracy. While voting for president has never been more important, there are many other important people and issues on the ballot. From US Senators to State Legislators, Illinois voters have many decisions to make, including whether or not Illinois will pass the Fair Tax amendment.
Illinois’ constitution currently requires a Flat Tax, meaning everyone pays the same percentage of their yearly income. While that may seem fair on its face, a look at the bigger picture puts its inequities into perspective. The bottom 20 percent of wage earners currently pay almost twice as much of their total income for state and local taxes as the top 20 percent, according to the Responsible Budget Coalition’s report. This regressive tax places the burden on low-income and middle-class people to pay for an undue amount of our state’s revenue, which is not only unfair but also counterproductive, which leads to a shortage of state funding. 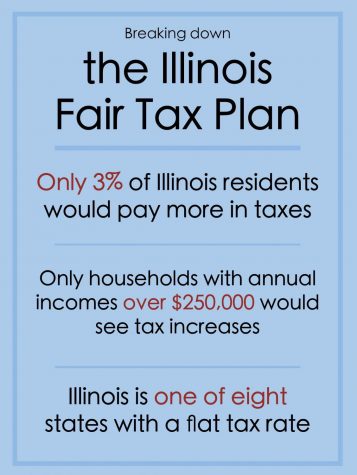 On Nov. 3, Illinois voters have the chance to get rid of the Flat Tax requirement and implement a graduated “Fair” income tax, where lower-income people pay lower rates and higher-income people pay higher rates. With this change, only 3 percent of Illinois residents (those making $250,000 per year or more) will pay more in taxes, while everyone else will either see a decrease or no change at all. By shifting more of the tax burden to high earners, our state will generate over $3 billion in new annual revenue, which can be invested into our necessary but underfunded social services, such as mental health support, affordable housing and education.
“Right now, Illinois ranks 50th in the nation for equitable funding of public education,” says Jewish Council on Urban Affairs Field Organizer Emma Kagan. “Gov. Pritzker has made it a priority to use increased revenues from Fair Tax to provide more state money to public school districts who do not have enough resources.”
While grassroots organizations are working hard to pass a Fair Tax, there are many well-funded groups in Illinois pushing against it. Often, they argue that the Fair Tax is an invitation for the state legislature to freely raise taxes on everyone and that higher income earners will simply move out of state, leaving the government to tax middle-class people excessively. However, according to the Center for Tax and Budget Accountability, “states with graduated income taxes are more than twice as likely to cut taxes on the middle class as to raise them.” In reality, if we don’t pass a Fair Tax, our insufficiently funded state will still need more money, likely leading to a tax hike for everyone. Additionally, the argument that residents will move away simply doesn’t hold up. While some Illinois residents may migrate to Florida or Arizona, those results are mostly situational— those states have a warmer climate and are home to many retirees. Other states with graduated income taxes, including New York and California, are still home to many wealthy individuals. As much as people try to argue that a Fair Tax is unjust and unproductive, the data simply proves them wrong.
Passing this amendment is more important now more than ever. Through struggling with COVID-19, Illinois has spent ever-increasing amounts on personal protective equipment, unemployment and other pandemic essentials not accounted for in the yearly budget. While many people have been taken a massive economic hit during the pandemic, according to data from the Census Bureau, two-thirds of Americans making over $200,000 a year have not lost their job or income. By taxing those whose finances haven’t been notably damaged by the pandemic, our state will actually have the funding to continue supporting our most at-risk residents and provide the pandemic essentials we need to survive.
Furthermore, the Fair Tax is a racial justice issue.
“I see economic justice and racial justice as intimately connected,” explains Kagan. “Regressive taxes are barriers to building wealth in Black communities, and also there has been a divestment and a lack of public dollars being spent in these communities.” In a country where income inequality and racism are deeply intertwined, the Fair Tax creates the opportunity to invest in Black and brown communities.
After months of a global pandemic and reckoning with race in America, the future looks bleak. Racism and poverty run rampant, with what seems like very little hope in electoralism saving us. While passing a Fair Tax certainly won’t address every issue, it is a necessary step towards wealth redistribution and economic justice.
Every vote counts. If you are 18 and registered to vote, I urge you to go to the polls this Nov. 3 and vote for a better, more equitable future for Illinois by voting “Yes” for Fair Tax!