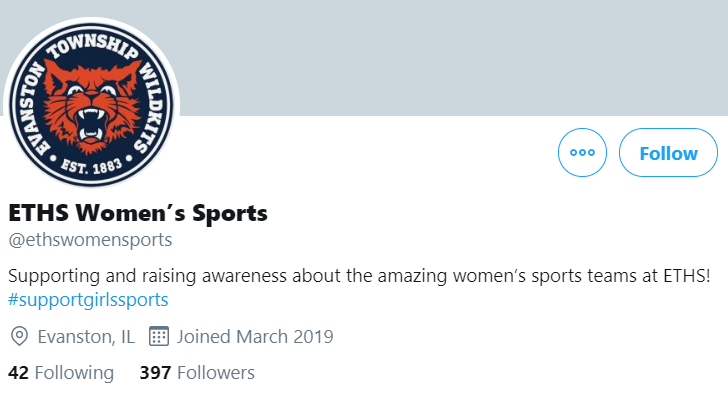 Mr. Livatino, your search is over.

I am @ethswomensports on Twitter. I created the account about a year ago in a temporary moment of annoyance. At the very end of the basketball season, I had noticed the huge disparity of fans attending girls’ games versus boys’.

Let me preface this by saying I have no problems with the boys basketball team, (or boys’ sports in general). I love the boys’ basketball team. I go to the games with my friends, and love being part of an energetic crowd. I celebrate wins, and mourn losses with the rest of the student body. My brother had been on the team the previous two years, and Harry Porter was considered a crowd favorite, but only because his friends populated the student section. The same section that was rarely ever full for a girls’ game. As an athlete myself, I know firsthand how frustrating it is to put all your effort towards something no one seems to care about.

I had seen the boys’ make two state runs by my junior spring. There were parades, announcements, and twitter frenzy over the amazing ETHS program.  This same season, the girls’ basketball team was just one game short of their own state run. While my friends and I had been there cheering our hearts out for the girls, the stands had been less than a quarter full.

Initially, it was about basketball. This amazing girls’ team had only 6 losses their entire season, and yet I couldn’t help but feel awful about the nearly empty gym I found myself in time and time again. It wasn’t about the fanfare or the parades, I just wanted to build a fanbase for the team.

If I wanted equal coverage for the girls, I knew other people would want that too.

Deciding on a Twitter account was an easy choice. I knew I could work with the official @ETHSports account to promote all girls matches in the following season. A close friend of mine, senior Eliana Chandra, ran the account with me. We both posted, collaborated on a schedule, worked together to make the Twitter account work. and I asked my friends to spread the word on every other social media platform to gain followers quickly.

Eliana and I were able to get help from a girl in every sport to ensure reliable information about teams and games. This way, athletes could tell us accurate scores, highlights, and times, and all we had to do was spread the word.

Another upside of this new account, what that it gave me an excuse to go to almost every home game that spring.

The best part about it was that everyone else was just as enthusiastic about it as I was. I got texts from people I barely knew expressing their own feelings about a new platform. People had been waiting for it. The account quickly grew into a fun, interactive platform to update fans and grow support for female athletes.

There is an active following of parents on Twitter who love the fast updates on their own daughters’ games, and even many parents who have become fans of other sports because of the newfound access to information on them.

This year, when basketball season came around, I was more than a little anxious to see the crowds for the girls’ games. Through the fall season, I saw more people encouraging their classmates and friends to support girls sports in Beardsley for volleyball, Lake street for tennis, and even Northwestern for field hockey.

The girls’ basketball team was anticipated to be more dominant this year in the Central Suburban League, and even the state, than ever before. I didn’t want to wait for people to take notice.

The girls didn’t make it as far as we had all hoped this year, and it was a heartbreaking overtime loss for everyone, but especially the seniors on the team. These athletes gave their whole lives to performing at the highest level ETHS has seen in a long time, and at their final game, the gym was packed.

As a graduating senior, I am able to reflect on this journey, and I am so grateful for everyone who helped along the way and the amazing female athletes that continue to give everything to their sports and their teams. I know that this is not the way any athlete wanted their spring season to go, but throughout this year, ETHS women have proven that they are a force to be reckoned with.

The account will continue after me and Eliana, and will remain completely student-run.