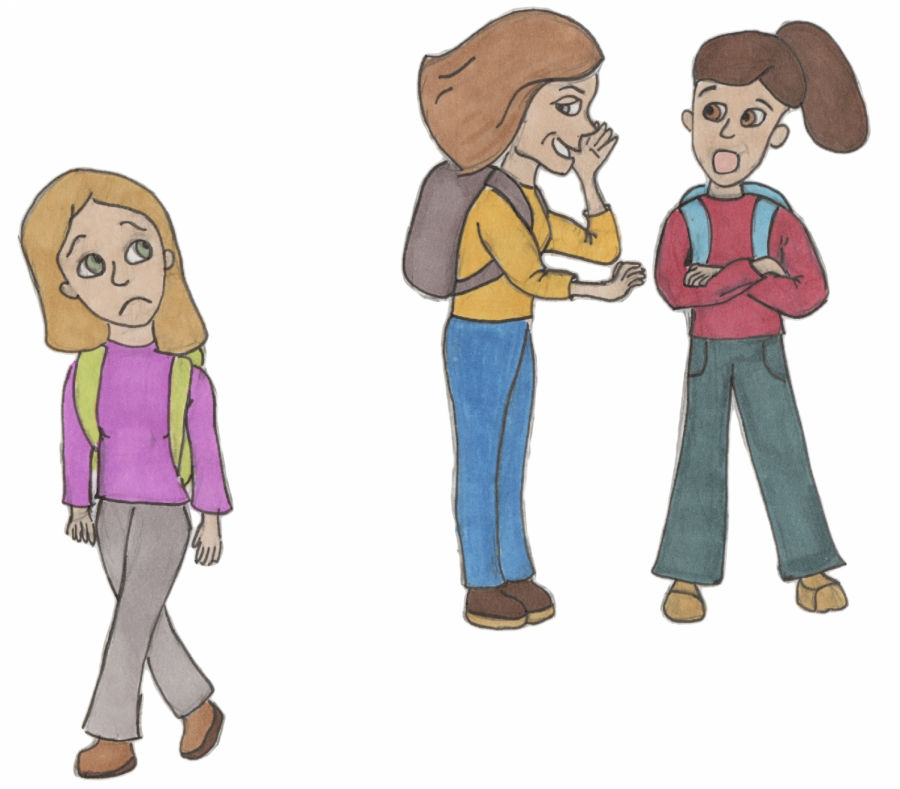 Gossip is best defined as “chatty talk, the spreading of sensational or intimate information,” according to Psychology Today. In mainstream media, gossip has become normalized through movies, TV and social media. Movies like “Mean Girls”, shows like “Riverdale” and apps like Daily Mail contribute to the idea of popularity through gossip due to the common themes they share.

From Regina George from Mean Girls, creating a book about her dislike of classmates to the preppy teens of Riverdale always seemingly stirring up dirt on classmates to Daily Mail working to report on celebrities while also spreading rumors regarding them all have one connecting theme: gossip.

It is through mainstream media culture that gossip becomes normalized. Placing gossip in shows, movies or on social media gives people the wrong idea. It blatantly proclaims that gossiping is ok because the people on your favorite shows do it. By having popular shows give off these messages, we are only furthering this cycle of gossip that can be so detrimental.

“At ETHS, gossip spreads like wildfire. By the end of it, everyone would have heard something about you, either positive or negative,” says sophomore Michael Burrell. “I compare everything to the most iconic high school movies, like Mean Girls and Heathers, and so spreading things about people has become the norm for people.”

However, these movies rarely unpack the full repercussions of gossip on teens and their mental health. On shows that include gossiping, there will sometimes be a scene in which the person who was gossiped about is crying or is very upset, but they rarely show how gossiping can impact people in the long run after that scene. Shows will sometimes reference this, but it is imperative that they are fully acknowledged given the severity of these impacts.

According to WebMD, gossip can lead to a variety of mental health impacts, including, but not limited to, exhaustion, depression, anxiety, clinical depression, post-traumatic stress disorder, panic attacks, guilt and suicide.

These harmful effects are why it is imperative we challenge the normalization of gossip. Right now, it seems that the person who does the gossiping or the gossiper, in many cases, has been put into the box of a “mean girl” or mean person, but mostly a “mean girl.” Historically, the media has portrayed gossip as a binary gendered issue and placed girls into these boxes. Yet, the media and society more largely fail to realize that gossip is a widespread issue that affects the lives of everyone, not just girls.

There are complexities in the nature of gossip and its problematic implications. We should not be framing gossip in gendered terms and start to break this binary.

While this idea of “mean girls” is not new, the depiction of a stereotypical mean girl appeared in Tina Fey’s 2004 production of “Mean Girls,” based on the book Queen Bees and Wannabes by Rosalind Wiseman.

According to the Australian Family Association, the film made a gross revenue of approximately $130 million, was the number one film in America at its release and enjoyed a long life at the box office. Even now, 15 years after Mean Girls aired, this idea of cliques and gossiping is still pervasive.

Social media has exacerbated the way gossip pervades social spaces and relationships. Now more than ever we have the power to send and receive information with the click of a button.

The current teen culture regarding social media is an unhealthy one. According to a study by the Pew Research Center, 72 percent of teens use Instagram, and with this large platform, teens have the ability to be cruel to each other with the chance of these posts going viral due to the velocity and size of the distribution mechanism.

Also, according to a Pew survey, 59 percent of teens who use social media have been bullied. According to The Atlantic in an article regarding bullying on Instagram, many teens will create hate pages. They’ll post photos of their target, expose secrets, post screenshots of texts from people spreading hurtful sentiments and anything else they can find.

These ideas of social media being used to bully and be mean to others only further exemplifies this idea of mean girl culture. I know, personally, there were many people at my middle school who were gossiped about online and they didn’t want to return to class out of fear of what their classmates may think of them. Plus, these social media platforms can be used for gossiping and by spreading these messages more and more, we are only continuing the normalization of mean girl culture on social media and putting these ideas into the heads of those who see them. Therefore, given the detrimental impacts of gossiping to both health and overall well-being of people, it is imperative we work to combat and challenge this narrative. We need to be able to practice more self-awareness and empathy toward others.

There is a key difference between talking about your own experiences and discussing other people’s lived experiences when they are not present to speak for themselves. It is through this understanding that we can combat the normalization of gossip and mean girl culture. It is also pertinent that we take the time to think about the media we are consuming. By doing this, teens can work to combat the further normalization of mean girl and gossip culture, which would benefit the ideals, wellbeing and health of countless people.