We need to be more engaged in our news literacy: true importance of social-political discussions 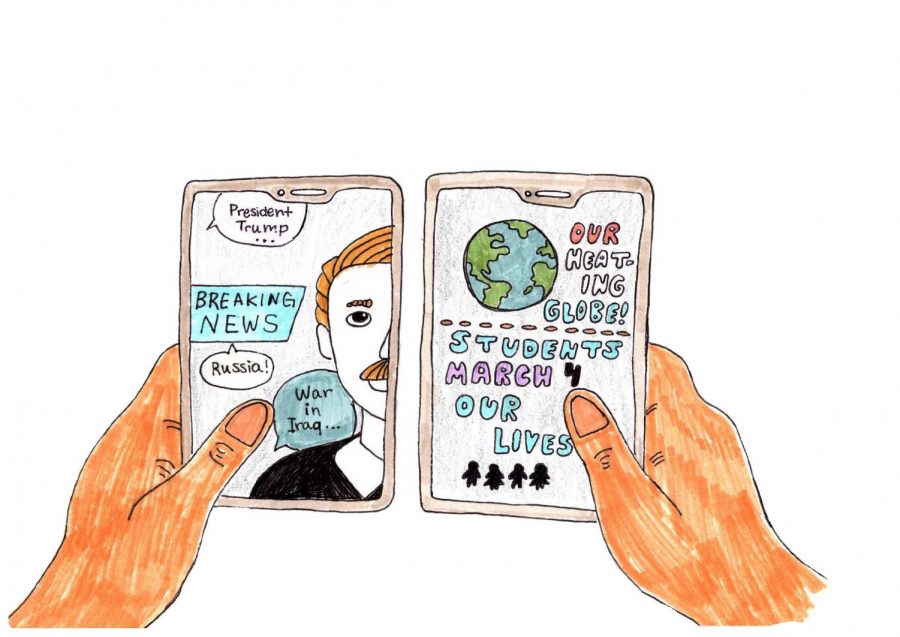 Consider a scenario in which you are sitting at the lunch table with a couple of friends and a small conversation sparks about the looming possibility of Trump’s impeachment. One or two people  are able to contribute by repeating the various opinions of others or recalling a small snippet of news they overheard. But soon enough, the discussion dies off when no one else is able to participate because they simply do not know more about the issue. They are lost in the conversation, embarrassed to speak up for fear of not knowing any concrete facts or just not having an opinion on the matter.

This inability to recall basic facts about news topics is partially due to teachers not facilitating the topics in class and students failing to learn about the issues on their own. Unsuccessful discussions like these lead to far more extensive problems at hand — if young people and teenagers nearing legal voting age are unable to recall or know basic facts in the news, what is the fate of our political status in the future?

And still, there are young people able and willing to engage in current events. Some teens have taken to social media to spread images of current news topics. But spreading the same few images of one event all over various platforms doesn’t really have any substantial impact on most teens these days. Even if they do evoke any sort of emotional reaction, it is hardly enough to solidly educate someone about the issue. In reality, all “social media activism” does is show a problem in the world, but doesn’t actually provide realistic solutions or a guide on how to make any sort of significant change.

Teens tend to stop at the surface of many important issues. Movements like March for Our Lives or the recent popularity in climate strikes are political protests that seem to be easier to get involved with. They are the popular protests, and the current events that mostly everyone follows along with.

With this said, we cannot neglect the young people in the world who are politically involved like Emma Gonzalez, Greta Thunberg, and the high schoolers in Hong Kong who have been going on strike since the summer. One thing that separates these kids from the typical teenager posting on social media is their passion and willingness to learn. They sacrifice aspects of their personal lives to solely dedicate themselves to the social, cultural and political things going on around them.

Although these young people are involved in worldwide events that do have deep roots to social issues, most of social media’s circulation of these events remain surface level, not diving deep into the actionable change behind them. The vast majority of kids are not staying up to date and consistently paying attention to policy changes, speeches and the day to day disputes of modern current events. In a study conducted by the Pew Research Center, only about 27 percent of young adults from ages 18-29 follow the news closely. The PRC also references millennial engagement of news topics on social media platforms with “the fact that young adults have greater interest in news on social media does not result in greater engagement with news there, as they are no more likely to share/repost news stories or comment on news stories than others.”

As someone who remains consistently interested in news and politics, I am able to continue these social political conversations from the lunch table to the classroom. In classes like AP Government and Politics as well as AP U.S. History, I am able to take advantage of a wide range of in-depth political discussions. My classes and teachers prompt and encourage my classmates to engage in politics in a variety of different contexts. I am able to get my daily information by just stepping into class without having to take time out of my day to attribute a separate education of current social matters.

My opportunity to take these classes and my interest in them affects the way I engage in discussions as a middle-class white female. AP classes often give students more access to these conversations because they’re more readily embedded in the curriculum. Kamasi Hill, AP European history, AP U.S. History and African American studies teacher, says topics of political discussions come up at least once or twice a week in his classes. That’s a lot of discussion in the classroom, not counting all the time his students spend outside of class working through various social political matters in homework on their own. But Hill challenges perceptions that students are not engaging in politics in their classrooms.

“Politics is everywhere, you can engage any student in any class on the issue of politics because politics has to do with the relationship between human beings and social systems.” Hill says.

Despite this, he makes a point by acknowledging that the responsibility for young people to stay engaged in politics falls on both the student and the teacher.

“My responsibility is to help that student bring to bear what’s going on around them but it’s also my responsibility to listen because you can find politics in pretty much anybody’s experience, it’s just a matter of listening and bringing that out,” Hill continues.

When teachers fail to engage in this essential responsibility, it creates a growing disadvantage for students. Even though Hill is promoting political discussions in his class, a lot of students aren’t able to engage in conversations like these.

Hill explains: “the problem is, if there is a teacher who doesn’t understand the way a student navigates the world, they may not be able to relate specific ideas around politics to their individual experiences.”

Without the encouragement from teachers, students will be unable to have these necessary discussions. When young people grow to be more politically involved and interested, the change we can make is infinite. Social media activism is just no longer enough. Ask your teachers to encourage current news discussions. Continue to spread accurate, educated news articles. Take time out of your day to watch the news. The importance of political discussions remains imminent, and we can no longer keep reinforcing a single story.