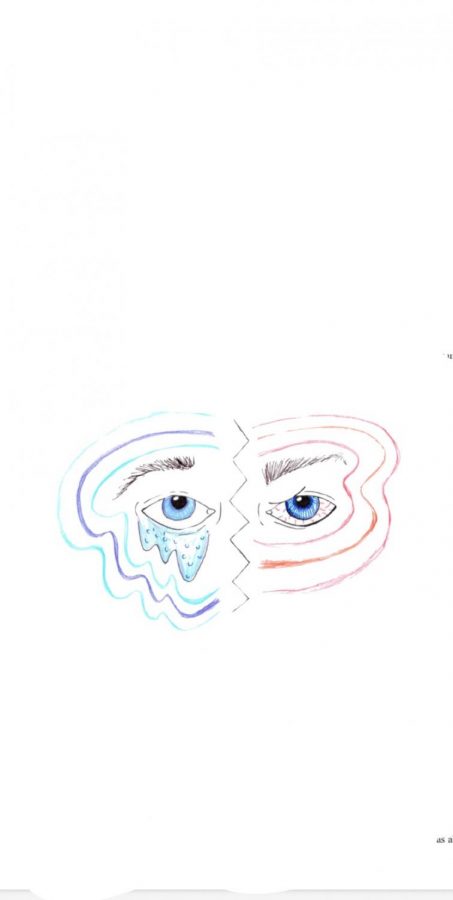 I saw my dad cry for the first time two years ago. I was shocked that the letter I wrote to him on Father’s Day was enough to conjure physical tears from this big man with tattoos on both his arms. At 14 years old, I was experiencing something I’d never felt before with my father: vulnerability.

My dad is what you might call a “tough guy,” a man who endured unusual hardship growing up in Communist Poland, under Solidarność and Martial Law. After the fall of the Berlin Wall in 1989, he moved to the US with only a duffel bag and $500 in his pocket. Growing up, I was never able to express real sadness around my dad, because from a very early age, I recognized that it made him uncomfortable. He would try to suppress the situation, distract me and eventually put his foot down and say enough, no more crying. He was the only one that would ever tell me to stop crying. If I was upset or anxious, I would instead turn to my mom or my friends, as they were more accepting of my emotions.

Even though I couldn’t express myself to my dad, as a white female growing up in this society, I have generally felt able to express my emotions as freely as I want to. I can cry and be angry without fear of push back. As a female, my emotions are, for the most part, accepted and tolerated.

For boys, on the other hand, the expectations for how you can express yourself can be very different.

“Not that it’s a belief that I agree with, but men are expected to be strong, tough, not really show emotion, be athletic and aggressive,” says junior Oliver Leopold. Fathers, coaches, teachers and male figures consistently reiterate the notion that “boys don’t cry”.

It is said to young boys from a very early age, and constantly reinforced into adulthood to suppress one’s emotions in order to appear less feminine. Feelings are associated with femininity, and if a little boy is seen crying or playing “like a girl”, the respect they get is instantly diminished.

“Being a man in society is that aggressiveness and constant violence. You can’t show emotion so what are you going to do – you’re going to get angry about things and everyone is affected by that,” Leopold continues.

I babysit for the sweetest three little boys. They’re all about two years apart, the youngest being five and just starting kindergarten. Now, at five years old, regardless of gender, children tend to cry. When he cries, his older brothers get embarrassed around me. They grow annoyed and angrily tell him not to cry. His tears turn into frowns and furrowed brows – not grasping why he’s not allowed to show his sadness through something as simple and as natural as tears.

Even at his young age, his brothers  were trying to “preserve his masculinity”. But what is this sense of masculinity that is instilled within boys at such a young age? There seems to be a set of attributes and behaviors assumed by men that must be strictly followed.

“The boys in second grade are acting the same as everyone else but as they grow up, people are telling you how to filter yourself,” says Leopold.

If a boy cries he’s a “wimp.” If he shows even the slightest bit of emotion he doesn’t deserve the title of a “man.” According to society, when a man shows any sign of femininity there’s an automatic questioning upon his sexuality. This idea has been a normalized family dynamic in American culture. . Fathers telling their sons they can’t cry. Grandfathers, uncles, brothers. Even girls and women project this absurd standard, because we’re generally allowed to cry with little to no repercussions. But if a boy expresses sadness, he is emasculated and laughed at.

According to University of California Santa Barbara professor and sociologist Thomas J. Scheff in Human Relations, “the emotional/relational development of males is one cause of male violence” (2003). Sheff asserts in his article “Male emotions/relationships and violence: A case study” that “men all over the world have been socialized to be strong, brave and competent, which usually has meant suppressing vulnerable emotions, especially fear, grief, and shame. In most male adults, these emotions are hidden, disguised or suppressed so consistently that early in childhood being aware of them becomes problematic.”

Sheff makes an interesting point here. As long as the notion that men must be “strong” in order to appear masculine persists, so will the suppression of emotions internally. Additionally, when men feel the need to rid themselves of emotion, they are denying themselves of being human. Gender is a construct that has historically ascribed certain human characteristics onto women and men. Men are socialized to be dominant in every situation: sports, academics and especially sexual encounters. 90% of perpetrators in sexual assault cases are men, according to the Bureau of Justice Statistics. This socialization of men in society to be “dominant” can be one explanation for this high rate of violence.

This experience of toxic masculinity is vivid in our own community. In Evanston, the need for boys to outperform their peers in sports is rampant, especially with the Big 10 sports mentality embedded in the Midwestern culture. When we grow up in an environment when the language around athletic excellence is commonly centered on a boy’s strength, we are not only perpetuating the notion that boys must be strong but that those who don’t identify as boys cannot be described as possessing strength. The moment we tell boys they can’t cry is the moment we tell them they aren’t allowed to feel human. An inability to feel human connects to an inability to make human connection, something that is essential to basic survival. If parents and adults knew just how impactful two words could have on a child, maybe rethinking how boys are raised on how to respect themselves isn’t as abhorrent as society deems it to be.