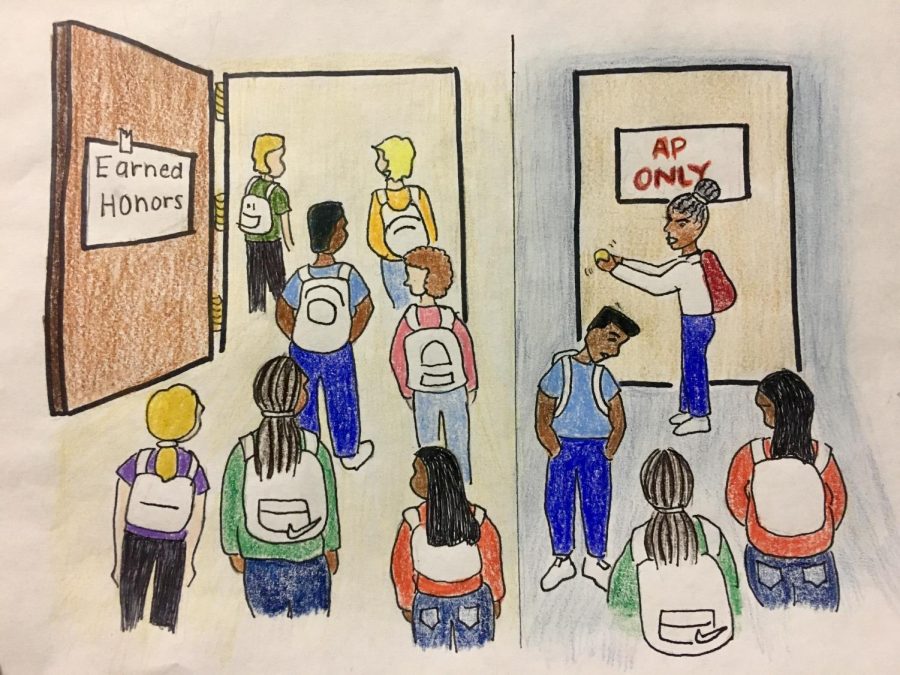 Going from a small, private school to a large, public high school was a very different experience. Being able to have multi-level discussions with peers was a benefit of a small classroom setting and  was a major part of my middle school experience. At ETHS, it was difficult at the beginning of the year to have similar discussion because everyone came from different educational backgrounds. Having earned honors classes has made it possible for my classmates and I my classmates and me to have in-depth conversations because we are all being taught the same curriculum at the same regular. Earned honors classes allow students to start high school with the same baseline as everyone else, so that students’ prior middle school background is not the dividing line between success in the classroom and throughout high school.

Prior to 2010, incoming freshman could be placed in leveled classes called honors, but the caveat was that students needed to test into these classes which created a point of access that some students could not reach. Because of the high access point that students needed to reach, a gap was created between students in honors classes, and students in regular track classes. This gap continued to widen beyond the freshman year and caught the attention of administrators and educators. The honors program had created a problem when students who took honors classes as freshmen went on to fill a larger part of AP classes as juniors and seniors, leaving students who took regular level classes to have a lesser chance of being encouraged to take AP classes as upperclassmen.

As a solution to this problem the earned honors system was created, which meant that all freshmen had the chance to earn honors credit in their classes, and be encouraged to take honors and AP classes in the future. This new curriculum is based around tests and projects that in which all students participate in order to earn honors credit. The first earned honors classes were in the science and humanities departments, but it has slowly been integrated into almost every department.  The earned honors program gives all students the opportunity to excel in high school which is why it should be a part of all underclassmen curricula at ETHS.

The earned honors program also contributes to the school’s work to allow all students of every identity to succeed academically in high school. When the earned honors program was first introduced in 2010, it had goals of eliminating tracking and giving all students the ability to learn equally in classrooms. The equality that the new curriculum promoted meant that all freshman would be given the same opportunities to learn and the same access to opportunities that would take their learning to a higher level. Incorporating earned honors curricula into all classes including electives would allow every student to feel like they have the same start to high school as everyone else.

Tina Lulla, AP Chemistry teacher, commented on the effect of earned honors classes with her students.

Not only does the earned honors system help students prepare for academic success in AP classes, but ETHS sets a precedent for other high schools to follow their lead in creating an equal learning opportunity.  Instead of only having certain kids in a class that challenges them, every student can now learn the same material at the same level. This sets the bar higher for every student individually and establishes a more equitable system as students move on in their high school careers. If all freshman classes became an earned honors class, students would start to see more equitable opportunities in their current classes, and more equality in classes in later grades.