The inaccessibility of activism breeds hypocrisy 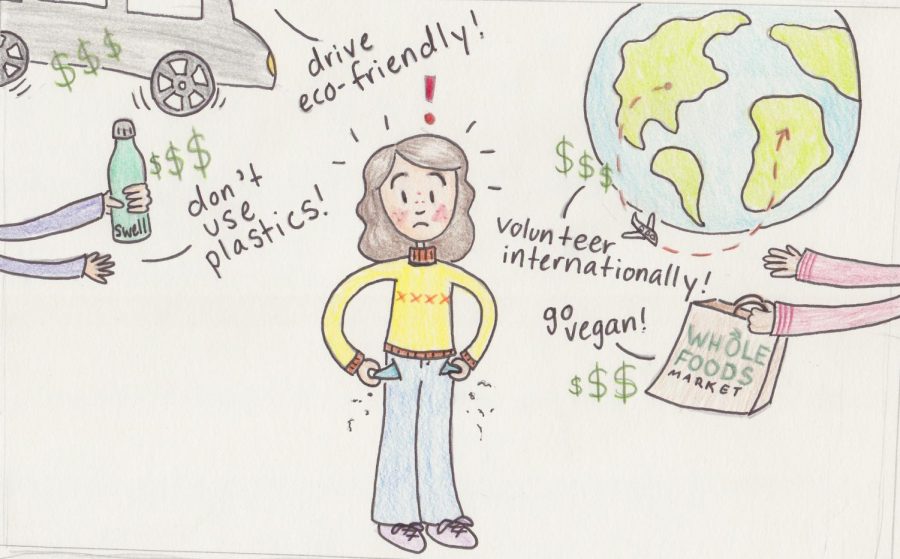 Scrolling through Instagram, you see a post that urges everyone to read it. You roll your eyes with contempt, having seen the same thing at least five times already, but you can’t help yourself. The post details the issue of climate change, inundated with statistics, desperate pleas to save the earth, and guilt-inducing phrases such as “what are you going to DO about it?” and “if you don’t compost, you’re killing our planet.” It continues on for awhile, but you have long since kept scrolling. It’s nothing you haven’t heard before.

This type of activism, like the post above, that ignores all nuances and conditions, one which targets those who do not relent to the inaccessible demands and forceful censures commonly preached by “activist” leaders, is often borne out of great privilege.

Privilege can come in many forms, most of which are rarely apparent to those who hold it. It is not just your gender or race that affects your activism but also your socioeconomic status, educational background and many other factors. These less outwardly visible privileges are commonly overlooked by society which can make being aware of them difficult.

With activism being such a nationwide “trend” as it is, it’s easy to get caught up in the fervor of creating change. The true roots of American activism (the Civil Rights movement, Black Power) are often whitewashed by white America, in favor of more “digestible” causes, such as the Anti-War movement, Women’s Liberation and Gay Liberation– digestible in this case being a guise for thinly veiled racism against non-white movements, justified by claims that their actions too radical and their leaders too reactionary. Even within movements like Gay Liberation that were originally started by people of color, white “activists” began to infiltrate these spaces in an eerily similar microcosm of how America was built in the first place, sacrificing people of color to champion white advancement.

And thus, activism became a visibly white endeavor, with their white leaders thrown in front of cameras and deified by news anchors while their counterparts of color were thrown behind bars and vilified as criminals in the same nightly broadcast of horrific irony. The ideologies and the practices of these movements had now been appropriated by white people and yet again, the foundation of activism — that was predominantly laid in the blood, sweat and tears of people of color — was finished with deliberate white arrogance. This arrogance created a building so separate from its original plans, its foundation was almost completely invisible to the public eye.

Clearly, the privileged invasion of activism is not a new phenomenon but, right now, history seems doomed to repeat itself. We are all oppressors in some way and us oppressors often neglect our own oppressive identities. And when you are dictating to a group of people what they should be doing with their lives, which is essentially what activism is in the 21st century, that is elevating yourself to a position of power.

One of the manifestations of this issue is that those who are calling for change have “higher” educational backgrounds, which leads them to use rhetoric that is only accessible to people of a similar pedagogy. Even while writing this piece, I’m perpetuating that very system of oppression with my language, something that I and all of us with educational privilege, need to be aware of and actively try to disrupt.

Likewise, those who do not reach as high a level of education are not exposed to the issues that many activists focus on or are not exposed to those issues through language that is accessible to them. This division of education further isolates these students, which maintains a system of oppression in which those who have educational privileges are reinforced as the normal face of activism whilst anyone else is relegated to a back page news headline here and there or never recognized in mainstream media at all.

For the example of climate change in particular, students in higher level courses, such as AP or honors, are educated on the science behind global warming and are often given the tools to understand the complex mechanisms that lead to this pressing issue. This clearly gives them a leg up if they were to later debate the issue on a public platform (i.e. social media) or if they were to rally people around the cause. However, many regular level classes do not cover climate change, leaving these students uninformed and sometimes without the tools to inform themselves.

Educational resources oftentimes go hand-in-hand with financial resources; a lack of financial resources can keep students from accessing tools to get ahead like test prep and tutors, or prevent them from pursuing post-secondary education. Of course, a traditional high school to university pathway is not the only way to be educated; there are many, arguably more fulfilling, ways in which people can learn.

However, the language used by many activists stems from higher education, which creates a divisive barrier between those who have the financial privilege of accessing that education and those who don’t. Many activists also might assume that like them, their audience has a disposable income with which they can buy the latest eco-friendly products, create the most flashy political protest signs, or go on an international volunteering trip in some far-away country. Particularly when considering the issue of climate change, this financial privilege becomes even more apparent.

Those who perhaps consider themselves activists in their spare time, or only when the inspiration strikes them, often post urging everyone to conserve gas by buying the new electric car, to go vegan or shop exclusively at Whole Foods in order to make sure what you buy is organic and to compost everything so that you conserve resources. However, what many middle to upper class activists often fail to consider when emphatically making these calls to action is that all these things cost money. Especially in lower income neighborhoods that are inundated by fast food restaurants and convenience stores, and practically barren of any grocery stores at which they can buy fresh food, going vegan is not nearly as simple or easy as these activists make it out to be. There are systemic, oppressive tactics in place to specifically keep low-income communities more reliant on fast food. Even if those stores were available, fast food companies have been proven to directly target low-income communities with lower prices and specific marketing, according to an article in the California Law Review, causing the despicable nationwide phenomenon of “food oppression” in our country’s poorer neighborhoods.

Similarly, talk of the working class by many middle class activists can be infused with harmful rhetoric that classifies the working class as a homogeneous group. This is dangerous to our society, as it tokenizes them as a group to be studied in upper-class academia.

Though this issue of privileged activism is a systemic one built on institutions that will probably continue functioning in their oppressive and cyclical ways, there are steps that we can take to try to change those systems. ETHS can integrate topics like climate change, gun control or mass incarceration into all curricula, not just those that are honors or AP. This will help to decrease the educational division between privileged activists and others.

Most importantly, we need to examine our own privilege– financial, educational or otherwise– and be cognizant of how those privileges can affect their activism. The very fact that activism is currently inaccessible to many is pure irony; we are working to contribute to the very inequities that we claim to be fighting.
Examining our own privilege is a step in the right direction, but is not the end all be all in the striving towards woke leadership. A simple thought process cannot undo decades of oppression perpetuated by those in power. However, the naming of the historic privileges tied to activism should take place in all classrooms and move across our all social and political spaces. Once participants recognize that elitism has no place in universal issues like the environment, change can finally happen.