Kavanaugh asks the question — can we answer? 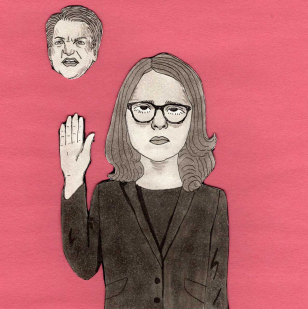 “It’s a very scary time for young men in America,” President Donald Trump told reporters on Oct. 2, following the testimony of Dr. Christine Blasey-Ford that she was assaulted by the man Trump appointed to the Supreme Court.

And throughout all of the partisan attacks, waves of #IBelieveHer posts and red-faced denials, the Kavanaugh case asks one question: Just how well do young men actually understand consent?
Men have flocked to Twitter to complain that they could be falsely accused of sexual assault at any moment, joke that they should wear body cameras when interacting with women and lament our new “politically correct” culture in which women look for any excuse to accuse men of misconduct (because, of course, the #MeToo movement is just a bunch of women looking for attention, not the product of hundreds of years of sexual violence towards women going unnoticed and ignored by society).

Though these comments clearly demonstrate society’s historical tendency to silence and invalidate women who speak out against sexual assault, they are also indicitive of the lack of understanding of consent nationwide. This societal lapse in thinking is due to many reasons, the most pressing being that many people were never well-educated about consent. To be clear, saying that a grown man did not understand consent is not an excuse for sexual assault or misconduct but merely offers a part of an explanation as to why sexual misconduct is such a pervasive problem in America. Clearly, as many things do, the issue of consent starts with our schools.

Here at ETHS, students learn about consent during their health unit of freshman P.E. and again during Wellness sophomore year. Health teachers follow the same standard powerpoint, according to freshman P.E. teacher Alan Nunez. However, teachers are free to add their own style to it.

“I like to go in depth into situations, so even though [the powerpoint] says, ‘if they pass out, it’s not consent’ I give certain scenarios… and I’ll break it down how that is a no,” says Nunez.
ETHS also hosts workshops open to students and teachers during Sexual Assault and Harassment Awareness Week on consent. These sessions can be englightening for many students and can offer a more in-depth look at consent and sexual assault than the few weeks spent on it in P.E. classes.

“I think the Wellness classes do an okay job of teaching about consent, but the sexual assault seminars during the awareness month is where I personally… learned more,” junior Jackson Hamrick says.“Having professionals who specialize in this area and don’t sugar coat anything when talking about consent is extremely important, and I think that anyone, especially men, should be going to [the workshops].”

Many teachers, like Nunez, recognize the importance of teaching consent to high schoolers, particularly men. It may seem like a no-brainer that all students need to understand the basic ideas of consent, but in fact, according to a study done by the Center for American Progress, only eight states require mention of consent or sexual assault in their sex education programs. This leaves a gaping, 42-state sized hole in our country’s education on consent, one that has clearly led to disastrous consequences.

Consider our president, who has been accused of sexual misconduct, ranging from harassment to rape, by 22 women. With every allegation comes a Trumpian dismissal, and his followers are backing his persistent brush-offs with full force.

This nationwide intentional ignorance is extremely frightening and paints a distressing picture of how we see sexual assault and human relationships as a whole. If children grow up seeing men in power who harass, assault and disrespect women at every turn, what kind of message is that sending to young boys about how they should treat women? In fact, what kind of message is that sending to young girls about how much we value them? The notion that men don’t understand consent or that sexual assault is often perpetrated by men in power is not a new one, but it is something that we need to be aware of and something we need to fight to change– and it all starts in the classroom. If young men are well educated on the issue of consent, if they understand how to respect women and their boundaries (or anyone’s boundaries for that matter), if they understand that consent is a sober, clear and confident yes, then maybe we will be one step closer to solving this nationwide epididemic of sexual assault.

Particularly at ETHS, with its overwhelming student population all under one roof, breaches of consent like this one are all too common. Even with student and administration wide efforts to increase awareness, the responsibility to understand consent also falls onto the students. It’s imperative to understand that Kavanaugh is not just a product of a Washington culture or a political culture, but a high school culture too. Educate yourself and others about consent and understand the implications of cases such as Kavanaugh’s, which can be found within both the nation’s capital and ETHS itself. Don’t let the irony of Trump’s statement fall on deaf ears– it’s not a scary time to be a young man in America, it’s a scary time for a nation that is still learning what consent means in practice and not just in speech.