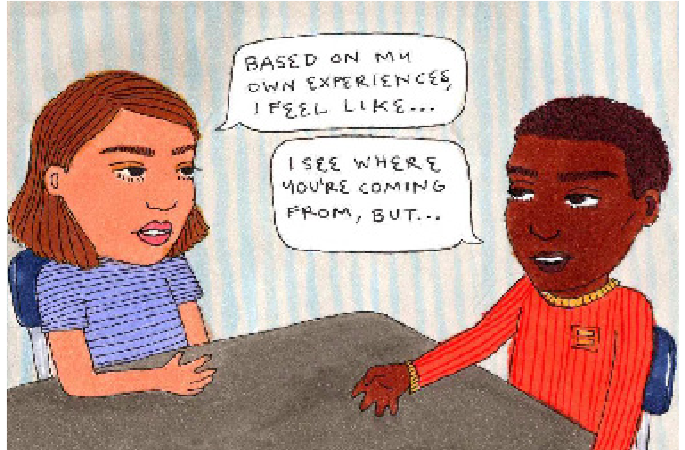 If you live in Evanston, it is likely that you have heard the term “liberal bubble” thrown around. This expression is in reference to the majority of our city that identifies as left leaning, and has likely dismissed or rejected differing, typically more conservative, views.

We at The Evanstonian believe that it is crucial that we reject the notion of the liberal bubble and the way it manifests itself as we distance ourselves from other views. However, in order to fully dismantle the “bubble” concept, we must actually work to dismantle its consequences. It is crucial that Evanston students and the community at large begin engaging in civil discourse, as it will ultimately allow us to make progress in whatever matter is at hand.
The concept of group mentality has silenced the voices of many people, hindering their comfortability of asking questions. Since there is a mostly homogenous mindset in Evanston, the less common, conservative voices tend to stay quiet. We are also used to being comfortable, thus when we hear anything unfamiliar; many of us tend to immediately shut it down.

Similarly, the culture of “wokeness” at ETHS, or striving to be woke, has created a fear of asking questions. When one strives to maintain a woke reputation, it is possible that they will refrain from asking a question, fearing it may deem them ignorant.

When people are pushing hateful ideologies, it is okay to not want to engage with them, especially if part of your identity is marginalized. Ever since his presidential win in 2016, Donald Trump has normalized extreme hate speech towards minorities and anyone who has different viewpoints. Consequently, many have replicated this disrespectful and dangerous language.

But where do we draw the line between engaging in conversation with people of different opinions and maintaining a sense of intolerance for views we deem dangerous?

There is not necessarily a set of guidelines to know when you should carry out the latter. After all, an hour long conversation is not going to change the views of someone who has spent their entire lives believing in and practicing the same ideology. Firstly, approach the situation only if you feel that your sense of safety isn’t being compromised. If you do decide to engage with them, a few things to keep in mind is making sure you are using “I” statements, providing space for questions, applying it to their existence (as they have different norms), remembering to follow up on the conversation, and most importantly, keeping a distance so that you always feel safe.

Ideally, we could converse with people of different views as a means of understanding the other side, knowing they most likely will not change. We want to educate them, but we also want to learn something ourselves. However, civil discourse shouldn’t exclusively be initiated by liberals. Conservatives are just as responsible for attempting to understand the other side.

Experiencing discomfort is an essential part of making change. However, there is a fine line between comfortability and safety. Let’s attempt to create more empathy for each other and people of differing opinions through understanding and communication, as our current state of divisiveness is only bringing more tension to the country.