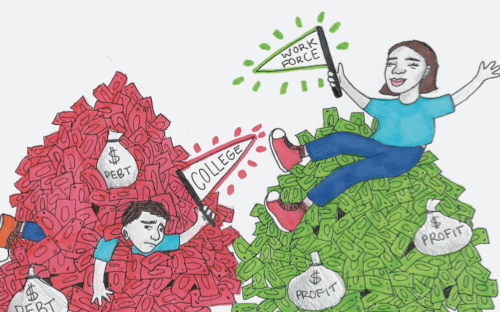 Although many ETHS students believe that college is their only option after graduation, there are a variety of other choices for post-secondary life.

According to a study conducted by Georgetown University, there are 30 million “good jobs” that do not require a college degree. For many of these occupations, trade school or on-the-job training allows for people who aren’t interested in the “traditional” path to still be a part of the work force.

California, which has been blue since 1982, is in the top three states when it comes to jobs that do not require higher education.

So, why does ETHS force us into college debt? This mindset leads to students taking out thousands of dollars worth of loans in order to pay for an education they don’t neccesarily need.

While our school has the College and Career center, many students feel pressure to go to a four year university after graduation. However, this is not an ideal path for every student. In-state tuition in America today is, on average, $9950 a year, with four year private universities coming at an even higher price tag of $33480. Don’t let our school fear monger you into college debt. With trade schools and gap years, there are many other options for students other than the “traditional” four year path.