Trump serves as distraction from other corrupt officials 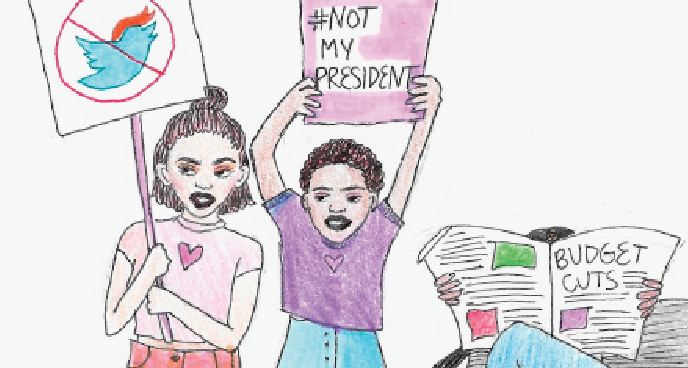 If your activism is based solely on rebuking the Trump administration, you are doing yourself and your fellow citizens a huge disservice.

Obviously, the Trump administration is one of the worst to walk through the doors of the White House. It is a racist, sexist, corrupt and borderline fascist administration whose goal seems to be to break and to take down every step of progress we’ve made over the past 100 years.

There is this self promotion and boasting when students talk about their “activism”, especially when it’s solely relies on posting things on your Instagram that support the people that Trump discriminates.

Yet, the focus solely on the Trump administration leaves a lot of people in power, who could more directly impact our lives, off the hook. One actually doesn’t have to look too far from the White House to find a governmental entity that is just as corrupt and passes crucial, harmful laws with a lot less fanfare: Congress.

An investigation by The Washington Post found that Congress, in April of last year, effectively stripped the DEA of a large amount of their power to go after drug companies. The same drug companies that push extremely aggressively, opioids that contribute to a drug crisis deadlier than the so called crack epidemic of the 80’s. To put this in a local perspective, last year there were 2,278 deaths in our state alone related to opioid overdoses. That was a 44.3% increase from 2015.

This is a law and a health crisis that directly affects us and our fellow citizens, yet gets no protest. No movement for phone calls to representatives. No circulating Facebook post, or a rally that is going to happen. What is the wait for?

When you get to a state level, it gets worse. Think people ignore Congress too much? Springfield, and the messed up things that happen down there, get ignored even more. For example, according to Chicago Tribune, Governor Rauner just cut $200 million from the state budget. That includes $89 million that was set aside for social services such as homelessness prevention and addiction treatment (which, just to be clear, counts as healthcare).

How does this affect us? Well, according to the state of Illinois, 5% of our students are homeless or without a permanent home. That is around 150 ETHS students.

This is just an incredibly small sample of the problems that our government, in all forms, has. Yet, most ETHS students rarely get involved in protesting, don’t call their representatives, don’t educate themselves on campaigns or smaller elections that are happening. Political/social activism without actual implementation or goals are inconsequential. Right now, that is what many ETHS students are doing when all they can show for the “resistance” is that they shared an

Instagram/Facebook post about some crazy thing that this president is doing.

Start educating yourself. There is a democratic governor’s primary coming up, and the three consequential candidates are all over the map when it comes to their progressivism and experience. Many have offices around the Evanston and North Shore area. Go on the Chicago Tribune’s website, or the political blog The Hill, true online publications, to find in-depth reporting on significant subjects you cannot find on Facebook.

Once you have researched your subject, take that information and get active. Volunteer on campaigns. Attend rallies in Chicago and Springfield. Call your representatives. That includes the governor. Posting something on social media does not equal resistance. Resistance is getting involved in local politics. Resistance is research. Resistance is going to local protests as well as national ones. Resistance is holding people in power accountable. Your Instagram post will not do that.