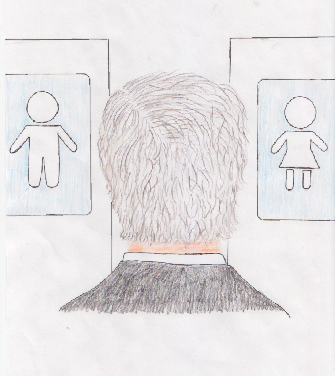 Freshman P.E. courses are separated by gender; non-binary students, or those who don’t identify as either female or male, are put in the class that transitionally align with their birth sex. This disrespects the gender identity of that person and forces them to go through an entire year in a class that is created for a gender with which they don’t identify.

ETHS has done a lot to embrace its gender nonconforming and transgender students with policies around pronouns, names and bathroom and locker room use. However, for all that they’ve done, separating P.E. classes by gender is an obvious contradiction to the acceptance and tolerance the administration preaches. It not only plays into the separation and construction of gender norms, but alienates great portions of the student body.

ETHS staff have participated in workshops on gender expression over the summer, which educate staff on pronouns, gender identity and other related topics.      Despite this, the freshman P.E. classes blatantly disregard all of these things the staff were taught.

According to a survey by GLSEN, 75% of transgender youth feel unsafe at school. In this case, transgender was used as an umbrella term for all gender nonconforming students. Separating freshman P.E. is yet another adversity non-binary students face that could contribute to the above statistic. When non-binary students are put in an all female class, for example, they are automatically alienated because of their gender identity. All students around them are assumed to be female and the student may feel that they have to conform to this as well. This could lead to further feelings of being out of place, anxiety, depression and ultimately, feeling that they’re unsafe in their environment.

Some may say that because P.E. classes are gender segregated for only one year that it doesn’t matter, but freshman year is a very formative year for all students. The current P.E. system singles out non-binary students and forces them to take a class that doesn’t correspond with or even seem to recognize their gender identity.

There is a simple solution to this problem: don’t separate freshman P.E. classes by gender. Instead, all P.E. classes should be inclusive of all gender identities, like upperclassmen P.E.. The administration needs to change the ignorant and exclusive practice of boys and girls freshman P.E.