Students press rights must be respected 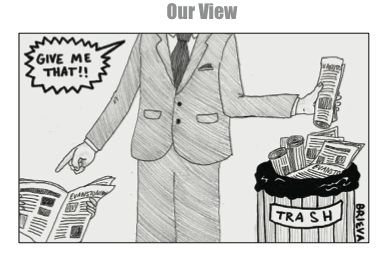 On Sept. 22, The Evanstonian ran a series of stories on marijuana use in Illinois, in Evanston and at ETHS. The three articles printed touched on Illinois’ possible legalization, the medical benefits and students’ own reasons for smoking. In addition, an anonymous six question interview with a drug dealer and several infographics on student use were featured in the section.

The content of these stories would be obvious information, if not for the fact that distribution and circulation of the paper was barred shortly after the day began, with only 500 issues distributed.

It was clear to us as a staff that the administration had some problem with our work, what remained unanswered by the party responsible for the confiscation, or by an administrative official for that matter, was the simple question of ‘why?’

Just why had the administration moved to censorship? Why had hours of writing, editing and design been nullified? Why were student atheletes supported in taking knee, expressing their freedom of speech, but the paper was confiscated? Why were the voices and stories of students across the school silenced?

These questions remained unanswered for the remainder of that friday, and they remin largely unanswered today — the administration has cited the vague reason of legal concerns, but has provided no evidence to back those claims. We as a staff were left confused, concerned and wary of censorship moving into this next issue.

Not only do we feel that basic ethical principles of free expression for student journalists have been violated, we hold that 2016 Illinois Public Act 99-0678 has been violated. The 2016 law, enacted in order to protect student journalists from unwarranted censorship from administrative authority, guarantees student papers the right to choose and print their own content free from intervention unless the administration has proven that the work is obscene, offensive or provocative of illegal activity. Our printed content on weed was solely of student voice, containing no opinions, no propaganda and no encouragement of usage. Our only goal was to display a prominent aspect of student life; yet, the administration still restricted our content.

This issue goes far beyond content, however. This is a matter of principle. The aforementioned law requires adminsitrative notice and explanation for the restriction of speech prior to the confiscation of print without undue delay. The administration waited for three weeks to hold a meeting with our editorial team, they neglected our outreach for over a week and a half, and have still failed to prove their legal grounds for their actions.

We, The Evanstonian as not only that the confiscated issue be redistributed in the name of free speech, but that the school board, the administration and the community respect and acknowledge our right to free press and content going forward, not only in accordance with state law, but in accordance with the very principles that ground our city’s progressive identity.