Technology and Teens: A guilt-free coexistence 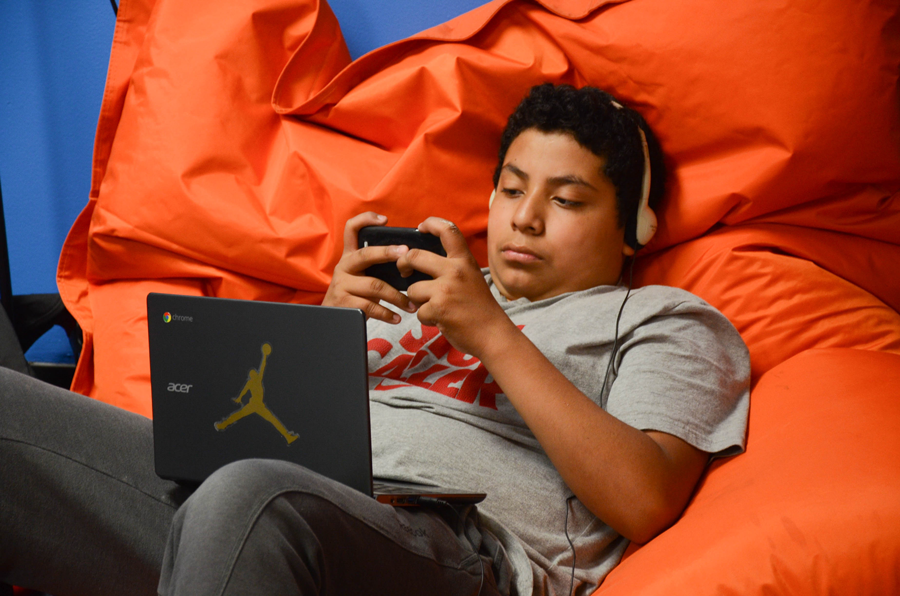 We’ve watched the metamorphosis of Macintosh laptops from blue and white, pseudo-modern bricks into sleek slivers of machinery. Cell phones are now hardly recognizable from their heavy, block-like ancestors, and now they can talk back to you with snappily programmed responses to questions.

You can decipher nearly any language with the right app, know the answer to nearly any question in minutes. Art, writing, and music is available with a few methodical taps. The world has changed, and everyone is in awe of its newfound capabilities.

And yet, one sector of the population is continuously criticized for their use of these advancements– teenagers.

Our adolescence and the technological revolution occurred in harmony. We walk the thin line between the old and the new, remembering fossils like Motorola Razr flip-phones and boxy PC computers while simultaneously using the James Bond-esque innovations like the Apple Watch.

It’s not difficult to see that this generation has been stamped with the label of carelessness— of indolence and apathy, a sort of detachment facilitated by the technological innovations that seemed to have perfectly coincided with our adolescence. The same message graces the cover of magazines, is spoken from the mouths of our elders.

It’s become a sort of an inside joke within our age— the assumption that with phones comes ignorance, with headphones come a lack of refinement, the expectation for us as teenagers to know exactly what to do with our future but the declination of our maturity, our grandmothers looking at us with our phones in our hands and asking with deprecation in their tones, “Do you ever put that thing down?”

We, the tail end of the millennials, walk the line. Half of the school remembers watching movies on VHS tapes and the other half has been given Chromebooks to use for the entirety of their high school careers.

Tangled in accusations, we continue walking, simply because it is all that we know. The technology, the innovations– they are so intrinsic to our lives because they are our adolescence. It’s rather difficult to separate ourselves from something that coalesced with us, something that seemed to mature as we did. We simply continued living. We have adapted to our environment as any species would.

Our only true fault is having been born amongst touchscreens. We may be connected to our devices, but it’s more out of habit than of choice. We didn’t seek this out as if on a mission to distance ourselves from our immediate surroundings– rather, it all just happened to come about with us.

Despite the accusations of older generations– and the pretentiously sneering mocks of the media– teenagers do, in fact, spend time away from their screens. Yes, I have the ability to leave my home without my phone in my pocket; yes, I do enjoy the outdoors; yes, I enjoy interacting with real people in the flesh. But when I go apple-picking with my friends, I’m going to bring my camera– because chances are, when I’m older, I’ll be glad that I took advantage of the resources at my fingertips to take photos. Chances are, I won’t regret having an excess of photos of myself and my friends as teenagers. Chances are, I’d sooner regret not having them.

That’s not to say that a life free of technology is not a life worth living. Adventures of all sizes are worth having regardless of whether or not they’re well-documented. But the fact is, we have accessible to us innovations that were previously available only for the very wealthy and powerful– and I don’t see anything wrong with taking advantage of that.

There is a life outside of the screens. But for many of us, that life and the one found between the keys are interwoven, and that correlation is only going to grow stronger as the years pass and new innovations reveal themselves. In the meantime, take the guilt-trips from grandparents and the media alike with a grain of salt. The line is ever-changing, and so are we, so keep on walking.