Start of the school day needs to be earlier 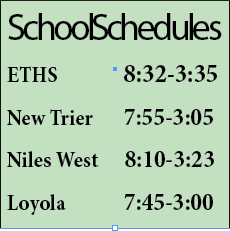 Most schools in our area start before 8 a.m. and get out before 3 p.m. Imagine the amount of things we could do with an extra hour in the afternoon.

Many of us have had to stay up because there isn’t enough time in the afternoon to get all our homework done. Ending school earlier gives students an extra hour of daylight to get work done.

Students are also more productive in the morning. A study by the University of Chicago showed that students are more productive in their morning classes. Students who had math first period had higher GPAs than the students in the last period class. Starting early also means more time for after-school tutoring and help from teachers, providing countless academic advantages.

Having an earlier dismissal would also greatly benefit athletes. Instead of rushing to the field or leaving class early to make it to a game on time, athletes could have time to prepare before practice. ETHS is notorious for being late to competitions, so an earlier dismissal would allow for sufficient travel time. More time to warm-up and mentally prepare could give our teams the competitive advantage they need.

Aditionally, many students work after school, and an earlier dismissal would give them a way to earn some extra cash.

Some students just aren’t morning people. Many students are tardy even with the late 8:32 start time. Understandably, the school might be concerned that the number of tardies would increase if the day starts any earlier.

Following the example set by other schools in the area, ETHS’s school day should start at 7:45 a.m. and end at 2:45 p.m.  Doing so would give us more free time after school, and would let students get more out of their day.