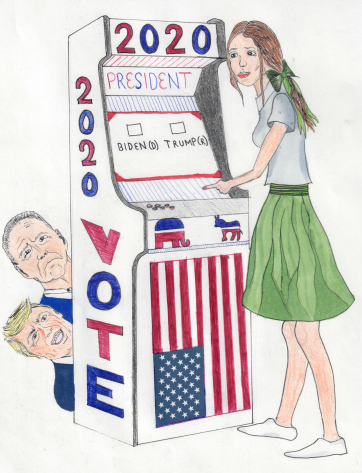 On Aug. 17, 2020, the Democratic National Convention (DNC) began. Seven days later on Aug. 24, the Republican National Convention (RNC) took place. While the primary purpose of the conventions is to announce the Presidential and Vice Presidential nominations, they are also an opportunity to establish party policy platforms and present a united front for the transition from primary to general election season.

The DNC and RNC are typically party run and represent the policies and rhetoric of the respective party as a whole, but, recently, the message has been dictated by the ideologies and perspectives of individual candidates, rather than the parties as a whole.

“National elections definitely are led by individuals rather than parties,” ETHS AP Government and Politics teacher David Feeley commented. “[Trump] was trying to portray that life is good… [that] I can still deliver a speech in front of four to five hundred people and have fireworks on the South Lawn.”

In RNC speeches, Trump was pushing a positive message of American prosperity, while also copying some of Biden’s rhetoric to appeal to moderates.

“Trump feels that it’s Biden’s qualities that are grabbing the middle, so he thinks that he has to mirror those same qualities to grab the middle,” Feeley said.

Some thought that the conventions were more of a marketing scheme to appeal to undecided and independent voters than a true representation of party policies.

“Both [conventions] felt a little bit fake. Specifically the DNC,” senior Alex Johnson said. “They were making a lot of messages that [didn’t represent my beliefs]. Personally, I thought it was geared towards independent voters and people who aren’t decided. Both conventions showcased how much power and influence is tied to these parties. I think it was interesting to notice whom they chose to speak because, while moderates spoke, many focused on the speeches of [Rep.] Alexandria Ocasio-Cortez and [Sen.] Bernie Sanders.”

Biden has been talking about inclusivity since first announcing his campaign. Early on in the search for a Vice President (VP), Biden announced that he would be choosing a woman, and on Aug. 11, Biden named California Sen. Kamala Harris as his VP pick. Many have praised the decision of Harris as his running mate due to both her strong political influence and her potential sway amongst Black voters, while others have been wary because of her political attacks against Biden during the primary season as she campaigned for the Democratic nomination.

Harris holds vital experience as a former California prosecutor in an election where many feel that criminal justice reform and the defunding of police are key issues.

“Policy regarding criminal justice and systemic racism [is] important for the Evanston area,” senior Nicole Beck, who will be unable to vote in the election, said. “Policy promoting job creation is also important to help the nation bounce back post-COVID. If Trump gets re-elected, I think Evanston will be okay, but I worry about Chicago and its lower-income communities.”

Addressing systemic racism means addressing the economic, achievement and housing disparities that exist in our society.

“[We need to focus on the] gaps within the system—where some are more fortunate than others, and it’s unfair. Whether that is housing, economic, achievement, income, or environmental,” senior Frida Soto said. “Evanston does a good job of making everything seem perfect when, actually, there are a lot of problems. We need policies that will actually change the system and do something about the housing separation… that bridge the [opportunity] gap.”

Johnson believes that Evanston’s most pressing matter is the portion of the city’s budget that is specifically geared towards the Evanston Police Department:  $41.1 million in total, 35 percent of the general fund.

“It doesn’t matter who wins the election, Biden or Trump; we need to fix these issues ourselves,” Johnson said.

Many Evanston students know this and are working to ensure that citizens are able to vote despite the restrictions posed by COVID-19 through volunteering as poll workers.

“I have gotten at least 50 [forms] from students who have volunteered to be poll workers for this election. I would normally sign less than 10 for any other election,” Principal Marcus Campbell said. “It’s great to see that there’s so much interest and that students are wanting to be involved.”

This election seems to be one where engagement is at an all-time high. In Superintendent Eric Witherspoon’s eyes, it may also be a turning point for youth voting and civic impact.

“We hear over and over again that people think their vote doesn’t count and we know young people have some of the lowest turnouts in our society. I think that this generation should change that trend, and this might be the generation that turns out in numbers more than any of the generations your age before you.” Superintendent Eric Witherspoon said. “Vote.