Evanston’s shutdown staff: how departments are changing as a result of the quarantine 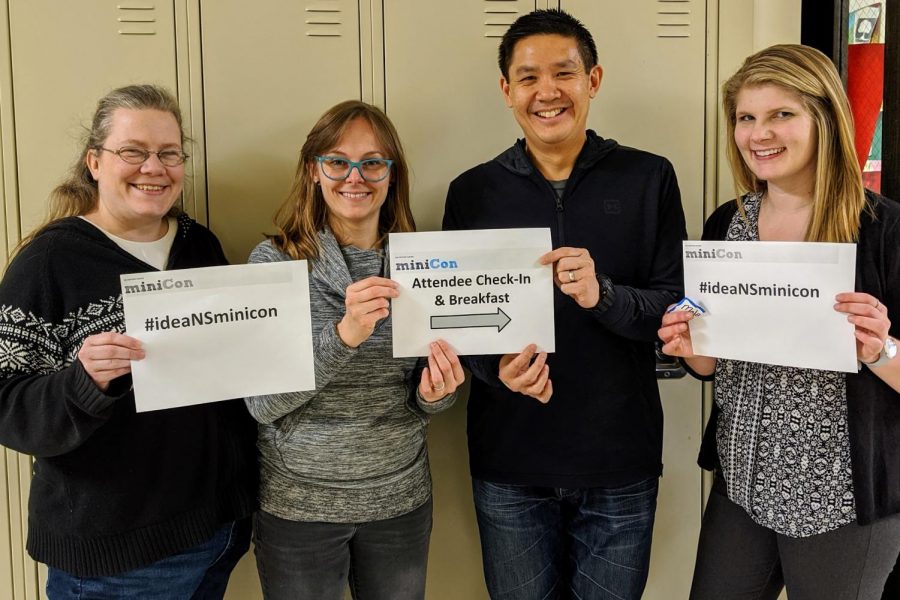 Every Evanston student and staff member has been impacted by the changes that COVID-19 has brought into the world—schedules have been changed, classes made digital, tests changed, relationships challenged—and as a result, every department has worked tirelessly to create a smooth transition. While the work done by teachers is crucial to this transition, the work done by non-academic departments is equally important to ensure the well-being of all parties; these are some of those stories.

Nowhere are the demands of shifting to e-learning more apparent than in the IIT department which has been responsible for assisting students and teachers in the transition to e-learning.

“People romanticize working from home, but it’s been pretty much non-stop since March 17. Our team, in particular, has definitely been bombarded, which is a good thing; [we’ve] always worked with teachers on how to transition work to the digital space and now there’s more of a necessity,” Director of Instructional Technology David Chan said. “People are definitely calling us and emailing us and asking for support, and we’re happy to oblige.”

In the days immediately following the transition to e-learning, school and department-wide meetings were held to help teach teachers about some of the essential tools they would need to work during the shutdown, but for the most part, IIT has been working with teachers on an individual basis.

“Immediately when we were transitioning we put a call out to ask what’s your comfort level with e-learning and we responded to any of the members who felt like they didn’t have a firm grasp. We had a kind of continuum from I can teach others how to do digital e-learning to I need a little bit of help or I am really struggling, so we met with any staff member that really needed the most support first and then kind of worked from there,” Chan said.

While the work needed to make the transition was immense, Chan explained that ETHS—having turned in e-learning plans last year—was far ahead of many other school districts, some of which have used Evanston’s model as a template for their own.

“ETHS was one of the few [districts] that actually turned [an e-learning plan] in [before the pandemic]. We did our due diligence, had a board meeting and went through all the checkboxes. So, we’ve been preparing for e-learning for quite some time… and ever since that trial run [last year] we’ve been thinking about how this will all shake out,” Chan said.

In addition to aiding teachers in the transition, the IIT department’s Chrome support team has continued to work from the Chromezone to keep student devices functional during this crucial time. Every day, one staff member will go to the Chromezone to field emails, repair devices and distribute mobile hotspots; all device exchanges are made using a special box in the Door 2 entryway.

While present events are far from ideal, Chan believes that there are positive outcomes that will emerge upon the return to normalcy.

“I’m more of an optimist—looking from a positive spin to all this—just from my work and my team’s work with teachers on transitioning content and doing more things digitally when it makes sense,” Chan said. “Showing teachers what can be done with technology and with digital tools will be a positive outcome going forward because it just opens up more possibilities when we do return face to face.”

For the Communications team, the greatest change brought about by the COVID-19 pandemic is in the volume and pace of information that needs to be disseminated.

“We obviously pay close attention to the national, state and local guidelines in response to the crisis…. What was true one day might change the next day, so we’re just really mindful of that ever-changing environment and how fluid everything is,” Director of Communications Takumi Iseda said. “Our goal is transparency because we want to make sure that we share complete information with all of our stakeholders.”

Despite this change in the flux of information, the Communications office was ready to handle the task because of their work responding to other types of crises.

“Part of the role of the communications office is actually to be part of crisis planning and crisis …. crisis is really anything that’s unplanned, but I think that understanding this [pandemic] is something that’s new, that no one has ever experienced before, requires just another level of adaptability and flexibility,” Iseda said.

While the department focuses on ensuring that the public has the information they need, equally important to Iseda is the wellbeing of her team.

“I like to do check-ins since I have a very small team… just checking in with everyone and making sure that we’re exercising self-care is really important and adapting as best we can in crisis mode,” Iseda said.

In addition to dealing with pandemic related news, the Communications office has continued to work towards the future to plan for the 2020-21 school year.

“The annual things still happen and those things have deadlines,” Iseda said.

Regardless of the changes thrown at them, the Communications team will push on, helping support all those in the Wildkit community during this taxing time.

Upon the announcement that school would be closed for the month of April, an order which has now been extended through the end of the school year, Nutrition Services had a crucial task: ensuring food was accessible to all Evanston students who needed it.

“We immediately, before we even had to per the state, figured out what we could do and combined efforts with the city to still get meals out. It has evolved just like everything is but at first we were sending meals out daily, breakfast and lunch daily, and then it turned into twice a week, and then it just once a week. Now we’re sending out a bag of food, five breakfasts and five lunches inside each bag, every Monday,” Director of Nutrition Services Kimberly Minestra said.

The way that Nutrition Services has gone about preparing meals for Evanstonians has evolved as the quarantine began to settle into place; however, at the moment, meals are prepared by Nutrition Service staff on Fridays and Mondays before distribution at four locations throughout Evanston on Monday afternoons.

“We have like a total of 18 or 19 people in our space at once… [but] we’ve spread out into the art wing and we can be far enough apart…. The staff is still getting paid, which is wonderful, and they’re only working two days a week: on Fridays, they come in and we put all the bags out and start putting the non-perishable items in the bags and then we add the perishable items on Mondays, and then they’re picked up every Monday,” Minestra said.

While proper social distancing guidelines are in place, the social interactions that staff share from working to make meals are still deeply important to the well-being of all involved.

“Our staff has been really supportive and has had really good attitudes. I think they’re happy to be around each other through and just around other human beings; it gets us out of the house, it gets me out of the house and just helps us to connect with each other,” Minestra said.

While the department is no longer taking in revenue from selling food every day, the city is reimbursing the school for each meal. However, with more prepackaged foods each meal costs more to prepare.

“I’m not totally sure what the financial ramifications are yet, it’s a little soon to figure that out… but we’re not bringing in as much [from the city’s reimbursement],” Minestra said.

Regardless of the financial impact, Nutrition Services will continue to serve meals to all Evanstonians in need through the end of the quarantine and into the summer through the pre-existing summer food program.

“The district is very supportive… [and] we just want to make sure that we continue [working] because now more than ever there’s a need,” Minestra said.

The school closing offers both positives and negatives for Operations who have continued to operate throughout the closure.

“We’re short crewed since the superintendent didn’t want more than four or five people in the building, so we have one maintenance guy, two engineers and maybe two custodians. They take care of [and are] maintaining the building: checking mechanical spaces, making sure washrooms are straight, keeping the superintendent’s office nice and clean… for whoever’s there,” Director of Operations Clarence Gregory said.

Gregory said that while staff are willing to come into work, many were surprised by the fact that regardless of that choice they would receive their usual income.

“[The staff] was surprised that the district said don’t come in and you’re still getting paid; that was very nice of the school and [work during the shutdown] is all volunteer. We have a schedule, every week for four or five people to come in each day so we can maintain the building…. At first, they were a little nervous about coming out but when they found out it was only a few people at a time they were fine with it,” Gregory said.

According to Gregory, there are positives emerging as a result of the building being closed; for example, the utility cost has shrunk saving the school money during this difficult period.

“We’re definitely saving on utilities. We turn the heat on in the morning because we have the Health Center there, so we make sure they have heat and hot water, but we shut down by about 1 p.m. and we’re not using gas, water, lights are turned off so no electricity. That’s the positive thing in all this, we’re saving on our utilities costs big time,” Gregory said.

Furthermore, Gregory hopes that as places begin to reopen, the department will be able to seize on the opportunity to work ahead on the larger summer projects that usually couldn’t start until June.

“The best thing about this is that if they open the school back up for the staff and contractors, we can get the big projects that we wanted to start in June started earlier. If they say yes, we want to do a roofing project, we want to finish the boy’s locker room, we want to work by the swimming pool area,” Gregory said.

Despite the benefits that the shutdown presents, they are nothing compared to having a building filled with students: “the building is for the students, we’re there because of you guys… and when you come back in August, you’re going to come to a beautiful building,” Gregory said.