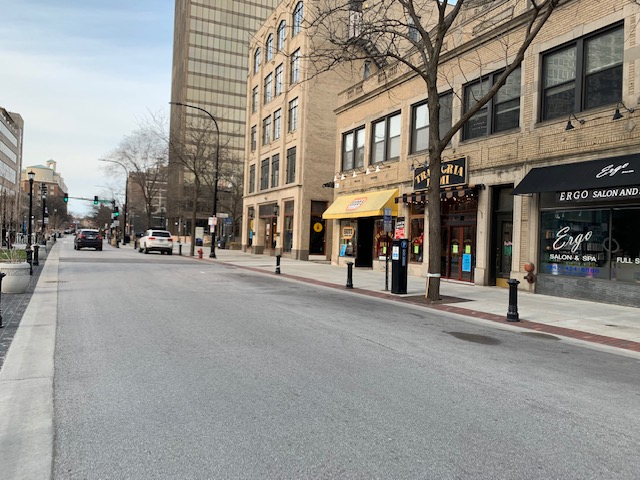 Storefront of Edzo's Burgers on Shermer Ave. in Evanston on April 3 at 6:00 pm.

The COVID-19 pandemic has disrupted every aspect of our lives.

From the way we interact with others, to the amount of time we spend outside, to our mental state, nothing has gone unscathed; while public health is at the top of many people’s concerns, many also worry about the ramifications the pandemic will have on the economy, both locally and nationally.

These effects became most clear in Evanston following Governor J. B. Pritzker’s March 15 order to close all “non-essential stores” and gathering places alongside all bars and restaurants for dine-in service through the end of the month, an order which has since been extended through April 30.

“We closed in stages, first we just closed for walk-in business and we kept trying to run the store with the staff there filling orders. But then it started to… feel unsafe for me to have staff people getting on public transportation to come in and work together in that small space. So we decided to close about… a day ahead of the stay at home order,” Nina Barrett, owner of Bookends and Beginnings, said.

Bookends and Beginnings, like other businesses, is continuing to do business online, which provides some amount of revenue for the store.

“[The website] gives us a little bit of a revenue stream at a time when many businesses have to shut down completely and have no revenue stream. We’ve made [our customers] aware that ordering from us right now really positions us better to be able to ride this out, and people have been really responsive to that,” Barrett said. “Of course, it doesn’t put us in a position where we’re gonna be as solid financially as if we could just do regular business, but it’s better than nothing.”

This same mentality, preferring to keep something open and moving rather than nothing, is responsible for the continued operations of local restaurants including Edzo’s, who have continued to offer take-out and delivery service through the crisis.

“We’re still doing some sales… probably a little less than half of what we would normally do. So we’ve just been trying to stay busy and we’re doing some extra cleaning and working on some projects like moving tables around and deep cleaning stuff,” Edzo’s owner Eddie Lakin said.

Both Lakin and Barrett asserted that the most difficult part of their choices to close operations, either completely or partially, was a concern for the wellbeing of their employees, particularly with fears of an approaching recession.

“[My employees] understood exactly why it was not gonna be safe to be there… so they were great, and…. I think they appreciate that I am worried about their safety. They, I’m sure, are worried about their jobs, because so many people got laid off from small businesses that didn’t have the cash flow to even get through the month without business. I am happy that I have enough cash flow to hang on for at least a little bit,” Barrett said.

Part of the consideration that Lakin described relies on the COVID-19 stimulus package which offers increased federal relief to many Americans including those who are unemployed, with the amount ranging up to $1200 per adult based on a number of factors including employment, income, the number of dependents (an additional $500 will be added for every child under 16), and marital status.

“I’m watching the political end of this and trying to figure out… [if] my employees [would] be better served if I laid them all off and then they can claim unemployment or is it better for them if I keep them working. It’s kind of a lot to try to figure out and I think everyone feels the need to do something but… we’re being told not to do much of anything and that’s really the best thing you can do,” Lakin said.

Lakin isn’t the only one concerned about the support offered by the government as, alongside payments to individuals, the federal stimulus package contains provisions aimed at supporting businesses, particularly small, locally owned stores and restaurants. However, despite these efforts, fears about the future run rampant as many worry about what the future will bring for both their businesses and for the world in general.

“I have to kind of think in terms of what it’s going to look like: if I get help from the government… what does that mean? Do I have just enough to pay rent, or do I eventually close the doors and figure it out?” Lena Kim, the owner of niceLena & Friends, said. “[It’s a challenge] that is facing everybody else with a small business.”

Barrett explained how one option she has considered includes looking into the possibilities of taking out loans, something which while not ideal may prove to be necessary to continue daily operations.

“There’s a lot of talk now about loans. I spent most of the day applying for small business loans. The problem with loans is that most small businesses operate so close to the bone anyways, that if they have to pay back loans on top of their not very big profits, they don’t know how they’re gonna do that,” Barrett said.

On March 28, Barrett launched a GoFundMe campaign to “ensure our survival in these uncertain times;” as of April 2, it has raised over $20,000.

Furthermore, the uncertainty COVID-19 has brought threatens to further destroy the Downtown Evanston business community—a community that has been under attack for the last few years from large online stores leading to the closure of several Evanston storefronts since the start of 2020.

“Before this happened, I was very concerned about what downtown Evanston was gonna look like. There’s a real crisis in terms of empty storefronts, in terms of small retail businesses just being able to get by anyways,” Barrett said. “The problem after this is over is gonna be that we’re just gonna have an empty downtown, and that’s not healthy…. When you think about this virus destroying people, which it is doing, it’s destroying a downtown which wasn’t very healthy to start with and has really had a problem with its immune system. So, we’re really gonna have to work harder than ever to put it back together.”

However, small businesses are far from the only groups affected by the COVID-19, with some of the harshest effects landing on the homeless community.

“People are scared because they want to protect themselves and their families,” Carolyn Bishop, development operations specialist at Connections for the Homeless said. “ [Connections for the Homeless] is a resource where people were can come in and get their basic needs met. Access to the food pantry, showers, laundry, and lunch. In addition, we offer comprehensive case management and healthcare. At the beginning of this crisis we knew that these services still needed to be available to our community while protecting our staff and participants.”

In response to the Governor’s shelter in place order, Connections for the Homeless undertook a massive city-wide effort to shelter over 100 people in need of a place to stay and food on the table to ensure that they can be as safe as everyone else staying in their homes. The project ranges from the use of over 40 hotel rooms, to church buildings, to rental homes opened up to the effort; however, the purpose remains the same for all.

“Our biggest priority was to figure out a solution to get our participants sheltered in place. Thankfully, in partnership with Evanston Community Foundation, Interfaith Action Evanston, YWC Evanston/North Shore, Lake Street Church, Curts Café, and Robin Rue Simmons, we have managed to shelter 160 people…. Now we need to maintain food supply to our sheltered participants and work on the next steps to further their case management. We’re very excited about being able to have so many people in such a short period of time,” Bishop said.

This has been supported by the work of volunteers and donors who have, according to Bishop, “stepped up to help us in this big time of crisis.”

The pandemic has also made a large effect on working students with many students losing the ability to work as a result of store closures.

“I can no longer work at my job [because of store closures, and] it is kind of affecting me but at the same time its better because I am focusing on [school]work that needs to be done,” junior Nyah Daniel, who works at Ms. Fields/TCBY Old Orchard, said.

Beyond students, COVID-19 has affected everything that holds a society together. However, that society has stayed strong and resolute; whether it’s book lovers donating to keep a local establishment open, people ordering from restaurants to help maintain revenue streams, volunteers offering to help shelters or just neighbors expressing their appreciation for others. Evanston has survived.

“We have an amazing community and I have been so impressed by all of our neighbors and support they’ve been providing,” Bishop said.

Louise Bond contributed to this piece.