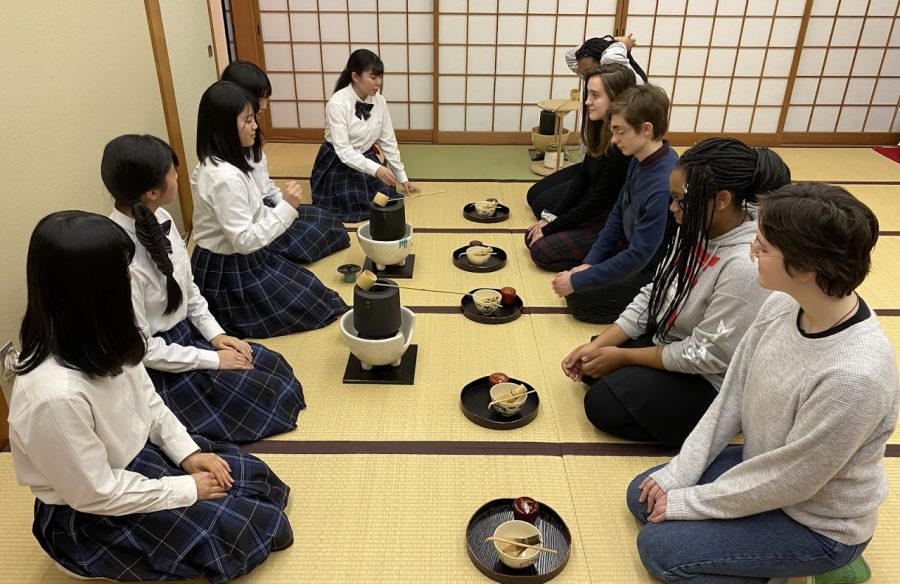 On Jan. 25, the ETHS Japanese class departed on a two week trip to Japan to explore the language, culture of the country and to have a once in a life-time experience. The 2020 Japan trip included 20 students, both juniors and seniors, and two chaperones.
This trip highlighted the students abilities to use Japanese and cultural knowledge to explore the country and take their education to the next level.
“Cultural immersion and language building were the two main purposes,” junior Evan Burns said.
The application process for the Japan trip began last school year and, once accepted, the Japanese students began planning fundraising opportunities in order to raise money for their trip. Along with fundraising, students were split into groups to plan half day adventures around Tokyo. Planning these day trips gave students the opportunity to learn how to navigate the Japanese transit system, find places to eat and organize fun activities for the whole group.
The trip was split in two, where one week was dedicated to sightseeing and tourist attractions while the other week was dedicated to staying with a Japanese host family.
During their first week in Japan, students toured the cities of Tokyo, Hirosaki, Aomoriya and Aomori. While traveling between these cities, students took the infamous bullet train, known in Japanese as a shinkansen.
“In Tokyo, we went shopping and visited a couple shrines,” junior Aidan Broy said. “In the more rural places, we stayed in hot springs hotels and got to visit these hot springs baths.”
The cultural immersion aspect of the Japanese trip involved touring many sites such as the Meiji Shrine and exploring Meiji era history and its involvement in the creation of modern Japanese society. While exploring the city of Tokyo, the students furthered their understanding of the many cultural aspects of the country such as Japanese cuisine.
“I tried so many interesting foods that I just probably would not have tried or eaten in America,” senior Aurora Liston said.
In the second half of the trip, the students traveled to the city of Urasa to stay with host families and interact with Japanese students at KJ school.
“We actually stayed with a host family, and that was a really cool experience because I got to live with my host family and bonded a lot with them,” Liston said.
One aspect of staying with a Japanese host family was students being able to use their Japanese language skills to interact and bond with their host families. Before arriving at the train station to meet their host families, there was a lot of nervous excitement among the students. Prior to going to Japan, the students had met their host families via email and text, but had yet to interact face to face.
However, meeting their host families upon arriving in Japan made for a different, more personal experience.
“We get there and they’re all standing in this crowd with signs and we round this corner, and they’re all standing there cheering and clapping. It was so much fun and you just knew at that point that you were going to feel welcomed,” Burns said.
In addition to staying with host families, students were given the opportunity to become exchange students in a Japanese school that, in turn, sent around 20 Japanese students to the United States for an exchange program with ETHS. KJ has been a sister school for ETHS since 1992.
“It’s a really empowering time for the kids; it makes all the language learning they are doing very real… [and lets them see] how kids across the world view the world,” Michael VanKrey, Japanese language teacher and exchange coordinator, said. “The school is very different from ours… but the kids make really good connections and learn a lot.”
The ETHS Japan trip and exchange program offers students an experience that extends outside the classroom.
“Even more than the language stuff, it’s finding out their place in the world and figuring out who they are,” VanKrey said.