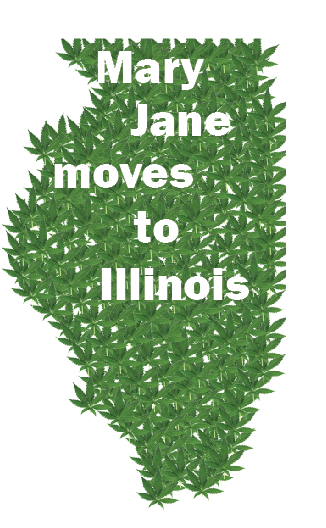 Disclaimer: This article discusses the legalization of cannabis for recreational use across Illinois. The Evanstonian does not condone or promote the usage of cannabis, THC infused products or any drugs.

On June 25, 2019, Illinois Governor J.B. Pritzker signed House Bill 1438 into law, making Illinois the 11th state to fully legalize cannabis for both recreational and medical use.

Going into effect on Jan. 1, 2020, HB1438 allows all people over the age of 21 to buy up to 30 grams of cannabis, 500 mg of THC infused vape oils and edibles and five grams of concentrated THC at designated dispensaries and possess it for private use. Non-residents will be allowed to buy half those amounts of cannabis products at Illinois dispensaries.

The bill was passed through the State Senate on May 29 with a 38-17 vote and on May 31 passed the House of Representatives with a vote of 66-47. Illinois is the first state to legalize cannabis using the legislative process, with other states having used ballot measures.

“We [passed] it by legislation, which means that we very carefully scrutinized the issue and had many different parties at the table: law enforcement, medical professionals, everyone was able to have an input,” Laura Fine, Illinois State Senator from the 9th District, said in an interview with The Evanstonian.

According to Fine, part of the reason that the bill passed was due to the success of the medicinal program, expanded under the new laws to allow patients to grow up to five plants on their property.

However, while the bill did pass with large support, that support was largely along party lines, with only six Republicans voting in favor and nine Democrats voting against the bill. Despite this, there was a presence from both parties at the negotiating table, a by-product of which has left individual communities to determine whether or not cannabis will be legal within their purview, and if so what restrictions will be placed on its use.

“Illinois is a diverse state, and issues that are important downstate aren’t the same as in the Chicago area and vice-versa, but [the lawmakers] were very thoughtful with respect to that,” Evanston City Manager Wally Bobkiewicz said.

After deciding if the usage of cannabis is legal within city limits, the largest choices given to the local level is the tax rate that a city places on cannabis products and the number of retailers in a given city.

The law allows  for cities to implement a tax of up to 3% on products in addition to the statewide taxes. These taxes are predominantly based on the level and amount of THC in the product being purchased, with taxes increasing the more concentrated a product becomes. Taxes will be starting at 10% for products with less than 35% THC, 20% for edibles and other infused products and will be 30% for any product with more than 35% THC. Factoring in general sales tax, tax rates will range between 19.55% and 34.75%.

These tax revenues are being used to finance a variety of programs across the state with the largest shares going to fund the Restore, Reinvest and Renew (R3) Program, mental health and substance abuse services and to train local law enforcement. The remainder will go towards paying past debts and into the general revenue pool with a portion being set aside for education.

One complication that arose while discussing tax rates, however, was that states where tax rates were too high, saw an increase in the black market rather than a decrease. As such, special care was taken in an attempt to prevent such developments.

“By limiting the amount of tax that can be on it, we can hope to… do away with the black market because people know that when they go into the dispensaries they can get a safe product,” Fine said.

The Role of Equity

Out of the 11 states that have fully legalized cannabis, Illinois’ bill includes the mosts provisions targeted towards social equity.

It’s estimated that about 770,000 cannabis related criminal records will be eligible for expungement as of Jan. 1, 2020. All criminal charges of possession of up to 30 grams of cannabis will be automatically expunged.

“By automatic, the provisions set up processes by which different groups are mandated to do different things under certain timelines,” Director of Policy at Treatment Alternatives for Safe Communities (TASC) Laura Brookes said.

TASC is a non-profit organization that works to divert people with substance abuse disorders out of the criminal justice system by providing support and advocating for alternatives to incarceration.

For charges of possession between 30-500 grams of cannabis, individuals will have to petition to the court if they wish to have their record expunged. Any charge for possession of more than 500 grams will not be eligible for expungement under this law. While the bill was being drafted, the knowledge of the barriers created by having a criminal record loomed large in the minds of lawmakers.

Illinois legislators included social equity provisions to the law, which will make business licenses more easily accessible to those who have been most heavily policed and impacted by cannabis. In order to qualify as a “social equity applicant,”  at least 51% of people involved must have been arrested or convicted of a cannabis related offense or be from a community that was over-policed for cannabis. These provisions were included to start reparations from the War on Drugs, which primarily affected communities of color.

“It seems only fair if the criminalization part has been disproportionately affecting these communities, once it turns out that there’s a chance to earn money on this thing… there should be special opportunities for the communities that have suffered the most policing of it,” Laura Beth Nielsen, Director for the Center of Legal Studies at Northwestern University, said.

In the same vein, 20% of business licenses will go to people of color, and there will be $30 million of funding available to support their businesses.

“What we’re trying to do is say that these mistakes were made in the past, we’re going to correct those mistakes… We want to make sure that lower income communities that were really affected by the war against drugs can get the opportunities that this law is creating,” Fine said.

Furthermore, a portion of the tax revenue from the legalization will be invested in the R3 program, or the Restore, Renew and Reinvest. According to the Illinois Justice Project, “The R3 Program drives 25% of cannabis tax revenue to fund strategies that focus on violence prevention, re-entry and health services to areas across the state that are objectively found to be acutely suffering from the horrors of violence, bolstered by concentrated disinvestment.”

With HB1438 going into effect, the first legal recreational cannabis sales will occur in Evanston on Jan. 1, 2020, with Evanston’s existing medical dispensary, Verilife – PharmaCann, making the transition to selling for recreational use.

PharmaCann opened a location in Evanston at the end of 2015, and has been renting their space on Maple Ave. from the city since they opened. For now, PharmaCann will remain the sole dispensary in Evanston, however, this may change with the legalization.

“We’ll have to see how things play out… the marketplace is going to have a lot to say about [the introduction of new dispensaries],” Bobkiewicz said. “I’ve been following with interest the articles, mostly in Crain’s Chicago Business, about communities deciding that they don’t want recreational cannabis in their communities… If some of our neighbour communities decide that they don’t want to have it, that could be better business for us.”

In addition to other communities refusing to allow the use of cannabis, lower taxes than neighboring cities could grow the Evanston market. With Chicago having announced that it is strongly considering levying the full 3% city sales tax, Evanston could have a market advantage if the tax rate is lower with people venturing to Evanston in order to pay less.

The specifics of how Evanston would go about implementing the new laws, including tax rates, zoning processes and the budgeting of cannabis revenues, have yet to be discussed in City Council, likely appearing in September or October sessions. However, Bobkiewicz said that he would warn City Council against budgeting any revenue from these taxes immediately.

“I don’t want to assume anything starting out, and also the monies that are collected the first three, four, five, six months may not be indicative of what a year maybe, so I think we’ll be in a much better place 12 months from now… to note what that money is,” Bobkiewicz said.

With respect to enforcement of cannabis laws, the Evanston Police Department is going to be relying largely on the beliefs of Evanstonians when debating intricacies of the law, that have been influenced by the decriminalization of cannabis in 2016.

“Being consistent with the community’s thoughts and desires [is important] to how we work,” Commander Ryan Glew said. “We aren’t characterized as hard-line, thinking that every cannabis arrest is going to have a strict impact… We’re very practical and pragmatic about what happens going forward.”

This empathetic attitude will continue in the future, on the condition that it remains within the bounds of city ordinance, state law and the norms being set by the Illinois police community, all of which need the rest of the year to fully develop.

“The remainder of 2019 is going to give us the information that we need for when the rubber meets the road, but I think we’re pretty intune with what they community’s philosophy and outlook is on this and we have a pretty good perspective ourselves. It’s all going to come together in the end,” Glew said.

Regardless, with only 133 days left until the Jan. 1 deadline, the community is beginning discussions around how we address cannabis and what it means for our future.

“The sale of recreational cannabis is our future in Evanston, we need to be prepared and we’re going to spend the rest of 2019 getting ready,” Bobkiewicz said.