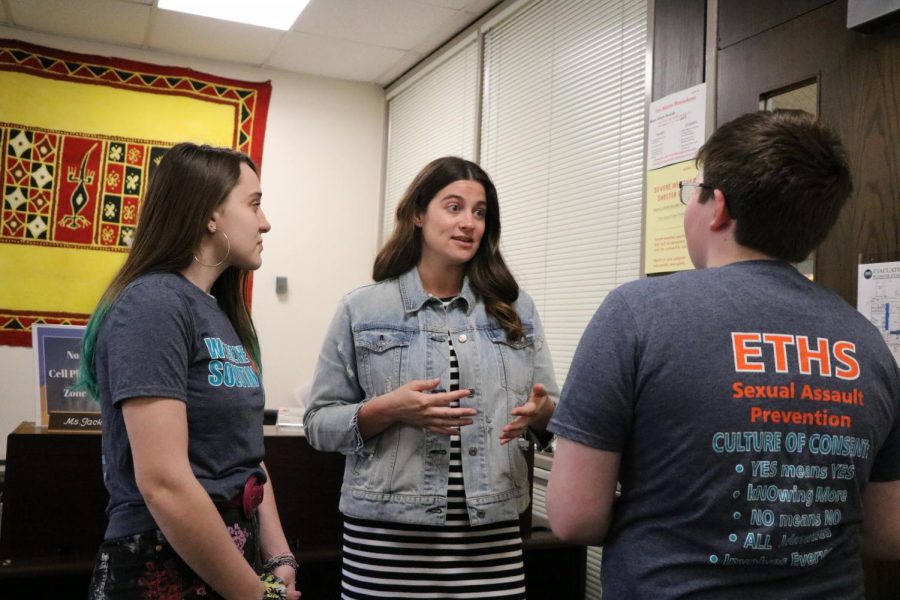 Over the course of this week, the Sexual Assault and Harassment Prevention Committee (SAHPC), a student-run club at ETHS, hosted workshops to educate and to inform faculty and students about issues surrounding sexual assault and harassment in schools, workplaces and the community.

“April is National Sexual Assault Awareness Month and ETHS is committed to education and prevention around this important topic,” SAHPC sponsor Lisa Roncone said. “This movement puts the onus on all of us to do our part in normalizing consent and reshaping the ways in which we… show respect to each other, in all spaces at all times.”

SAHPC partnered with the Chicago Alliance Against Sexual Exploitation (CAASE) and the Northwest Center Against Sexual Assault (NWCASA) to lead the workshops. The workshops were centered around a wide range of topics, including information about consent, healthy relationships and sexual harassment.

“The presentation covered the differences between healthy, unhealthy and abusive relationships,” sophomore Quintin Brown said after the Healthy Relationships workshop. “I was interested to see how my communication style was objectively effective and ineffective, and it taught me how to view relationships from both perspectives.”

In addition, specific facets of the broader issue of sexual assault and harassment, such as media representation of genders and human trafficking, were also the focus of workshop sessions.

“I thought the workshop provided some good base level information for people who haven’t really had conversations involving rape culture and gender disparities,” senior Caelen Behm said after attending the Gender and Media workshop. “I think much more could’ve been discussed to address some of the reasoning behind the disproportionate sexual violence towards trans individuals and POC especially.”

Other workshops addressed the role of sexual assault in marginalized groups, including women of color and the LGBTQIA+ community.

The SAHPC promoted their slogan throughout the month, #WeAreTheSolution, to spread awareness that everyone plays a part in ending sexual assault, and a large part of that is through education and communication, which were foundational to this week’s workshops.

“We wanted an educational space that people could come into and learn. It’s not a disclosing space to share experiences, just to learn and spread knowledge,” sophomore SAHPC member Sahaara Clark said.

Students in SAHPC hope that this week will continue to foster sustained discussion about rape culture, heteronormativity and inequities that exist for certain communities with the issue of sexual assault.

“While only a week long, this sexual assault awareness week has the ability to begin shifting the culture and setting a standard for how all of us should be making our community safer all year round,” senior SAHPC member Erin Kim said.

Another goal that the club is working towards is to increase the amount of male-identifying involvement within the workshops and the club.

“When I went to the sexual assault committee, there was only one boy,” sophomore SAHCP member Michael Sweeney said. “The female involvement was huge, and that’s not a bad thing, but it needs to be balanced out a lot more.”

In addition to coordinating the events for the month of April, the SAHPC meets every Friday during AM support to discuss conversations surrounding sexual assault and harassment. This past year, the committee has grown significantly, with increased participation and interest from underclassmen.

“I’ve been really happy with all the ideas and capabilities of everyone,” Kim said. “It makes me feel really good leaving next year knowing so many people will still care about the issue.”