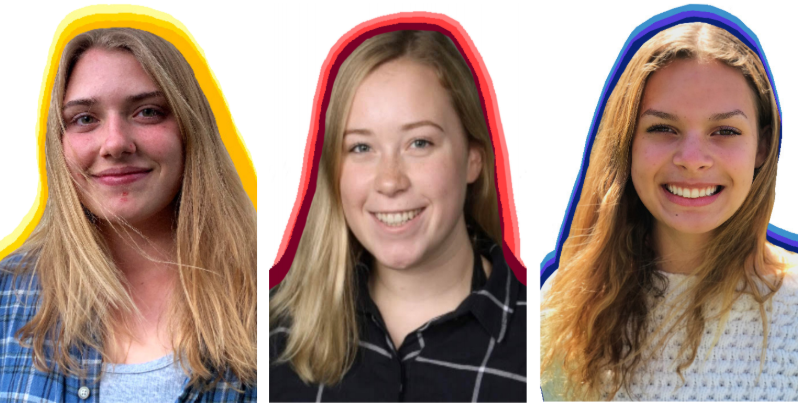 Today is voting day. Three rising seniors are running for the position of Student Representative to the School Board for the 2019-2020 school year. To vote, students can visit their MyETHS accounts. Here are the candidates and a glimpse of their platforms.

Junior Echo Allen has been involved in school politics since her freshman year, and is prepared to represent student voice at the highest level.

“I’ve seen how policy in this school can actually be made, and when it doesn’t work… I know the role of the student representative and what’s most impactful in our school, I have that knowledge and experience,” Allen said.

Allen played a role in the modifications to the dress code policy in 2017 and in 2018 March for Our Lives Walkout. It is this history that Allen feels qualifies her to represent all students.

“It’s extremely important to promote student activism in our school, but I also understand the reality of how we get things done in this school. I’m super optimistic because I’ve seen both sides and worked on both sides,” Allen said.

Having worked with many different student organizations including SOAR, GSA and the Student Union, she hopes to help them work together to accomplish even more.

“We need to focus our energy on working together and collaborating between different student organizations… and I can see how I can help with that,” Allen said. “There’s a lot more power in collaborative work.”

This mentality is seen in the creation of her platform, one based on the goals that students are currently working towards.

“I’ve been talking to student advocacy groups and organizations… [with regards] to what changes they want to see next year in terms of policy and what they’re working on,” Allen said.

Some of these policies include the integration of a nonheteronormative Wellness curriculum and finalizing changes to the tardy policy.

“As a school, we have so many identities and it’s extremely important that we analyze our policies and make sure it’s actually reflective of that,” Allen said. “We can see policies that are currently hurting students and need to be changed. We need to be able to facilitate students to be safe in this space..”

“I have the ability to use my knowledge and my experience as part of the Student Union to create an avenue and to clear the path for student advocates and student advocacy groups to create change in this school… our school has a good foundation and it’s important that we use that as an opportunity to grow.”

After seeing a lack of change for the past three years, junior Jessica Rogers felt that she could be the one who can make a difference.

“I’ve experienced issues… that either haven’t been addressed or students have tried to address and failed, or they don’t know how to address,” Rogers said. “I just don’t see [them] being addressed correctly for a student environment that’s friendly and safe.”

Rogers has been involved in both Student Union and in Emerge, both of which have influenced her leadership abilities and the type of representative she aims to be.

“Emerge has taught me a lot about leadership and has also exposed me to a lot of the issues in the school and in the Evanston community… [it made me] sure that I can hear all student voice,” Rogers said. “I don’t want to just do what I want to do, I want to listen to students… I want to make sure I’m creating an environment where every student has a voice. You can’t deal with other issues until you first recognize that every single student in the school has had a completely different experience.”

Changing the tardy and detention policies are both on Rogers’s platform, with her suggesting that AM Support should be counted as serving detention. In addition, Rogers wants to put an emphasis on  sexual assault and harassment happening every day at Evanston.

“Harassment in the hallways isn’t properly being addressed. I have talked to a lot of students this year who have been harassed in the hallways and they want safety to be doing something and they want the school to be doing something, but they don’t know the resources they have or where they can go,” Rogers said. “Every student deserves to feel safe walking from class to class… a lot of students in the school aren’t seeing enough action and they feel upset and betrayed… until it’s visible that it’s being addressed so much more needs to be done.”

Part of this change would be clarifying what the school’s policies are in terms of sexual assault and harassment, both in terms of what counts as assault or harassment and what resources are available to students.

“A lot of students are unsure, the policies very vague, so they’re unsure about what that means and what they can do, what they can expect and the resources that they have in the school. I want to create more clarity as to what that is,” Rogers said.

While she acknowledges that she would only have one year in the position, Rogers hopes to create change that will outlast her term as representative.

“I’m really committed to seeing the school a better place when I leave. My hope is that I can at least implement seeds so that change continues after I leave.”

“I wasn’t sure if I fit the mold for an activist… [but] after my work on the paper and listening to different voices in the space, and outside the space, as a journalist I realized that there were a lot of changes I wanted to implement… and that I really wanted to take action,” Weglarz said. “Activism isn’t fashionable for me, activism is an identity… Activism is very personal to me because I do not want to see my fellow students be unsafe anymore.”

The first point of Weglarz’s platform is changing the way that we teach environmental education.

The second point of her platform is changing how the school views punishment using the lens of restorative justice.

“Restorative Justice has this connotation of trying to make amends for the harms you make, but it can mean a variety of things. When we look at detention demographics they are often minorities, they are often people of color, and that upsets me,” Weglarz said. “A lot of channels could help change that, such as trying to shift the culture of disciplinary action to less punitive punishment. If we shift the response from ‘What’s wrong with you? Why are you doing this?’ to ‘Are you okay? What’s going on?’ that will shift as a culture.”

Finally, Weglarz wants to improve the reintegration of students facing mental illness back into the school environment.

“No student should have to be pushed back into school when they don’t feel ready… We can make it so that students feel that they can be integrated back into the school of their own accord and their own ability, and I don’t see that,” Weglarz said.

In addition to these three points, Weglarz wants to make sure that all students are safe and welcoming for all students.

“I want to achieve better student life. I want to make school a positive place for all students… and as much as the administration is trying to cope with that and as many programs as they are putting in there still needs to be work on that, beyond academics, of making school a better place for students. School should be a safe place and I don’t think it is.”