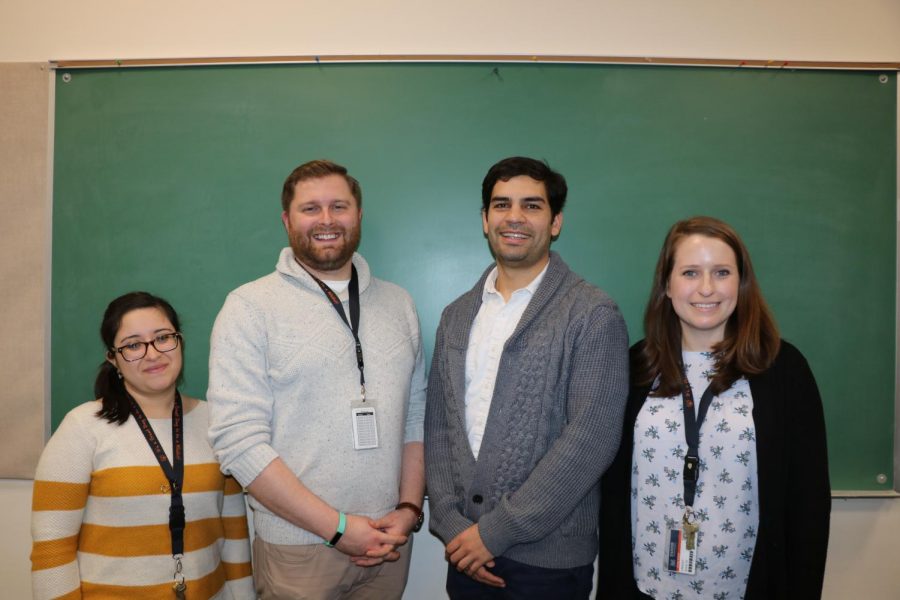 After previously teaching English at a for-profit company, first year German teacher Edward Gray has found student motivations for learning to be refreshing.

“My previous job was teaching adults. It was a for-profit company that people paid to learn English,” Gray said. “Educating because people are paying money for it is fine… but it’s just not what I wanted to teach.”

Gray feels he makes a larger impact teaching high school students at a public school such as ETHS.

“Teaching kids in high school is exciting and challenging, and why we do it is important for the future. I didn’t have all those things at my old job,” Gray said.

Gray expressed that he appreciates the community that has been created here.

“[ETHS] is a very dynamic place to work, every day is a little bit different. The students are great and my coworkers are super supportive.”

Gray, who lives in Chicago, feels he can assimilate easily with the environment surrounding ETHS.

“[ETHS] is still like a city type school and not a suburban type school. I’m not knocking suburban schools, but I wanted an atmosphere that was like where I live.”

Katie Pelayo first learned French when she was growing up in the northwest suburbs of Chicago.

“When I was in high school my two favorite teachers were my French teacher and my psychology teacher,” Pelayo said.

Pelayo double majored in French and psychology at Knox College. She then worked as a special education paraprofessional in Kansas and helped kids one-on-one as a translator-interpreter.

Pelayo then worked as a credit recovery coordinator for an online charter school with students who had failed within the public education system previously.

Pelayo said that her prior experiences “all helped push me to this decision to be here.”

While student teaching as part of her master’s program through National Louis University, Pelayo first heard about the open position for a French teacher at ETHS.

While Antonio Quintero grew up speaking Spanish, he often found the conventional Spanish curriculum to be dull.

“It was always super dry… I just wanted to do more and make it interesting,” Quintero said.

Quintero wanted to become a teacher to try to make Spanish more appealing. Quintero teaches Spanish through the lens of understanding the culture associated with the language such as food, dance and art.

Quintero was born and raised in the Boston area. He received an undergrad in Hispanic studies at Trinity College and a masters in teaching at Simmons University.

Quintero taught middle school in Brookline, a city outside Boston, and coached high school soccer for four and a half years. Last February, he and his partner, who have a tenth-month-old baby, moved to the Chicago area.

Quintero wanted to work at a diverse school in a community which was willing to acknowledge and discuss difficult issues, such as inequity. Ultimately, Quintero wants to form a personal connection with students and make Spanish interesting for them.

“One of my goals this year is to empower all students…I try and engage the students on a personal level…I hope that they know that I genuinely at the end of the day care about them more than the content,” Quintero said.

From a young age, Lindsay Schiltz observed her mom at work and was inspired to teach.

“My mom worked in schools so I always kind of saw myself as possibly becoming a teacher and I wasn’t sure if I wanted to teach little kids or high school, but as I started going to college… I really enjoyed [teaching] high school,” Schiltz said.

Spanish has always been an important part of Schiltz’s life, and her exposure to the language growing up motivated her to teach it as she believes that being able to speak Spanish is incredibly important.

“Growing up in the Chicago area, I always had a lot of friends who spoke Spanish, so I saw how important it was to speak Spanish in this area, and living in the U.S. in general,” Schiltz explained.

Schiltz is familiar with the teaching environment, but the ETHS environment is a unique one that she values.

“I think ETHS has a lot of school spirit,” Schiltz said. “Despite the fact that it’s such a big school, it’s definitely a community, and so I think that makes ETHS really special.”