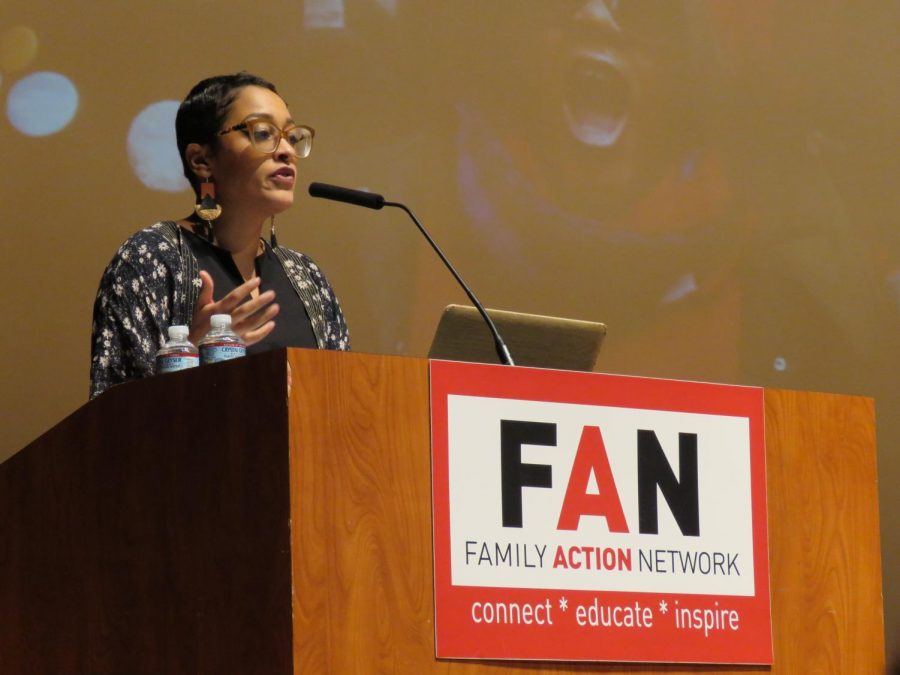 On the night of Dec. 5, nearly every seat in the main auditorium was full as Karamo Brown, most well-known as the culture expert on Netflix’s Emmy winning TV show Queer Eye, discussed the importance of conquering your fears and how to use your uniqueness for your own success.

Before starring in Queer Eye, Brown played one of the main characters on MTV’s The Real World: Philadelphia, making him the first openly gay black man on reality TV. He is also the 2018 recipient of the Human Rights Visibility Campaign Award.

Brown started the event by asking the audience to raise their hand if they ever felt like they weren’t enough. Almost every hand in the auditorium immediately shot into the air.

“I think it’s something everyone can relate to,” junior Aldric Martinez said. “With all the pressure that comes outwards and inwards, it’s really easy for Evanston students to feel like they’re not enough.”

Brown was born in Houston, Texas and grew up in Coral Springs, Florida. He talked about the fear he felt as someone with Cuban and Jamaican parents going to a “99 percent white” high school.

“Being in a space where I was perceived to be different because I had immigrant parents, I started to think ‘maybe I should hide the fact that I have immigrant parents’ … I didn’t want to be judged for being different,” Brown said.

He expands on how fear can dictate your life and block your potential.

“There was a pattern of fear of who I was that was stopping me from attaining the success that was right in front of me,” Brown said.

Brown spoke about his experience on Queer Eye, and discussed his methods of helping the hero, or the person they’re making over on the show, and said how he tried to make them believe that are “perfectly designed.”

“Once you realize that, you can attain the life you want,” sophomore Naiyah Bryant said. “I think that he was trying to tell us that we try to hide so many of our identities because of what people say to us or how we think people are going to respond, but you just have to be you, unapologetically you because there is really no other way.”

The event was about 45 minutes long, with a one question Q&A regarding to Brown’s experience as the only black cast member of Queer Eye.

“People would think, before the show came out, that I wasn’t a member of the fab five,” Brown said. “That I was their handler or their security.”

To finish the event, Brown shared a story about his relationship with the hero from season 1, a white police officer named Cory, that he had a memorable conversation about police brutality and the Black Lives Matter movement with.

“In this last election, Cory called me,” Brown said. “He said ‘When I voted, I voted with you in mind, and I thought about what you said about your sons not wanting to get their license because they were scared of cops like me.’ So he made different decisions in the booth based on the gifts that I was giving him.”

Brown also met with about 30 students from the GSA club to take pictures, receive signed books and chat before the event.

“He’s a fabulous human being, easy to work with. He’s got a strong, positive message. It’s about both affirming identity and about just becoming at peace with yourself,” FAN Executive Director Lonnie Stonitsch said. “I feel like that message is reinforced throughout ETHS.”

On Wednesday, Dec. 12, author, poet, essayist and visual artist Eve L. Ewing visited Evanston to speak about the school closings on the South Side of Chicago in 2013, and how it relates to public housing and segregation.

Ewing is the author of the recently released book Ghosts in the Schoolyard: Racism and School Closings on Chicago’s South Side and the series of Marvel comics Ironheart. She is also an assistant professor at the University of Chicago.

Ewing began the event by discussing some quantitative data regarding the 50 school closings that occurred on the South Side of Chicago in 2013, including the fact that 88 percent of students impacted by the school closings were black, 90 percent of the schools closed were majority black, and one in four schools in Chicago with majority black teachers and students were closed.

“There was no discussion of the role of segregation of schools and public housing when all the schools were closed on the South Side,” Ewing said.

Ewing shared her research and historical analysis about how segregation became so prevalent in Chicago and how that has affected segregation in public housing and public schooling.

Ewing described her thorough research and provided complementary pictures, quotes and a video that helped the attendees better understand the implications of her study.

“I think that her approach of understanding things through historicity and a background context rather than just individual events speaks to the problem in which we view the world,” senior Mollie Hartenstein said. “I think that’s applicable to every systemic issue.”

The talk and Q&A lasted for about 45 minutes each. Throughout both parts of the event, Ewing emphasized that schools closings affect both students and teachers emotionally, and they go through a process she calls “institutional mourning.” Ewing defines institutional mourning as the “social and emotional process undergone when one loses an institution they were affiliated with or had emotional significance in their life.”

Many at the event expressed a newly ignited motivation to involve themselves in the school closure issue in Chicago.

“As a community, and as someone in Illinois,” junior Mauranne Vernuer said. “We should be taking part in trying to change the system even if we don’t live in Chicago.”