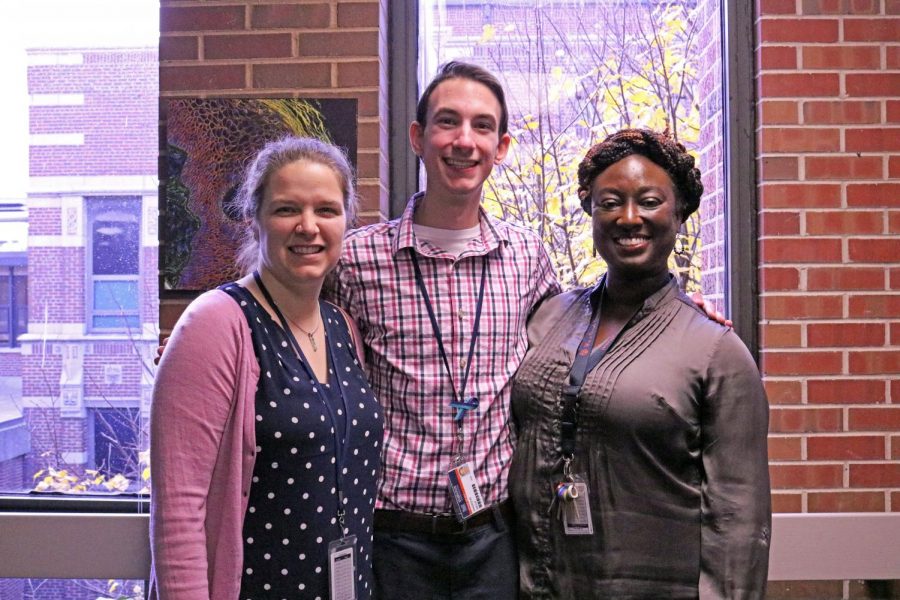 Fresh out of college from University of Illinois, Andrew Beck loved the idea of teaching, majoring in physics and minoring in secondary education. When looking at ETHS’ homepage, he realized that this was the perfect school for him.

Having always been interested in physics, Beck was especially inspired by his high school physics teacher.

Beck teaches classes for AP Physics and Physics. Even though he can’t imagine doing anything other than teaching physics at the moment, Beck does have a few interests outside of academics.

“I enjoy watching sports,” Beck said. “I’m a big fan of the Blackhawks and the Bears, and I also really like ice skating.”

Beck hopes that his students figure out who they are, grow as individuals and learn more about themselves. He wants them to take advantage of the school and let themselves be challenged.

When Emily Habbert was young, she would’ve never guessed that today she would be one of the physics teachers here at ETHS. While the thought of teaching had crossed her mind, she didn’t realize it was what she wanted to pursue until she was about to graduate college.

“I realized that all of the clubs and all of the things that I was involved with were teaching in one way or another,” Habbert explained. “I was captaining my ultimate frisbee team, which was a lot of teaching new players how to play. My summer job was teaching kids canoeing and kayaking. So it was like all these little threads that came together.”

Habbert worked as a physics teacher in a school outside of Boston. After her move this summer, ETHS was the school that stood out to her as the place that she wanted to work.

“The diversity of the school’s population was really appealing to me, as well as the fact that it’s a really well-supported school It just seemed like a good place to be,” Habbert said.

Marla Isaac has always found herself in a teaching position. In grade school, she had already landed her first tutoring gig by helping younger kids with their reading.
Isaac went on to get her Ph.D. from Northwestern University in Biological Science, and then a master’s degree in teaching at National Louis University.

Before coming to ETHS, Isaac worked as an in-class assistant in biology classes at National Louis and in another high school district. But ETHS stood out from the rest because of its diversity.

“The fact that there is diversity not only in the student body, but in the faculty as well. That was attractive,” Isaac said. “The district I came from, although our student body was very diverse, our faculty was not, and that was problematic.”

Isaac has been embracing this diversity by participating as a mentor for the National Society for Black Engineers, and hopes to get involved with SOAR, as well as possibly creating her own club for women of color.

“I love that ETHS celebrates everybody and all of their identities. Race, culture, sexuality, religion, everything. I think that is important for our global society to mimic,” Isaac said.