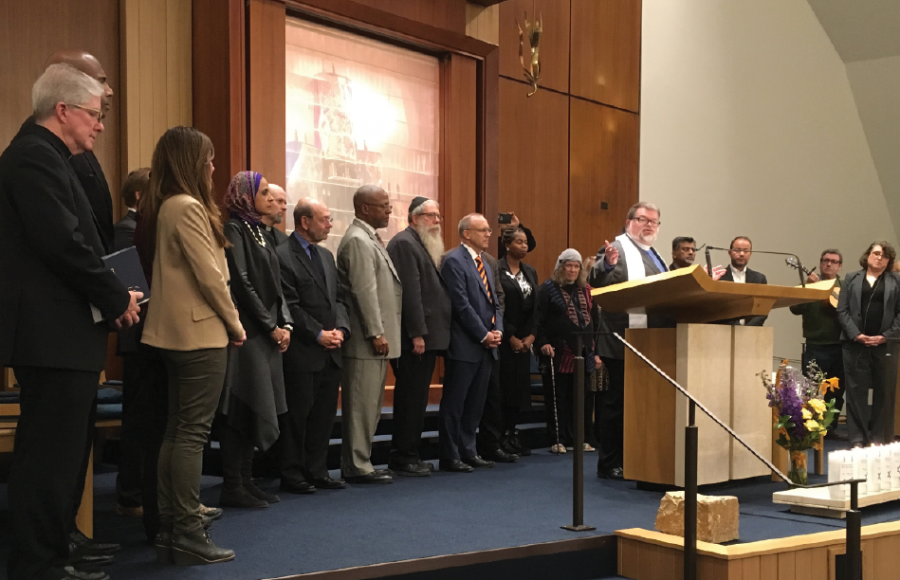 Vigil held at Beth Israel Synagogue in Skokie on Oct. 29.

In the span of a week, a gunman entered the Tree of Life Synagogue in Pittsburgh killing 11 of its congregants during Shabbat prayers, two people were fatally shot in a racially motivated killing at a Kroger in Kentucky, pipe bombs were sent to Democratic individuals and organizations, the son of a Ferguson activist was allegedly lynched and two women were killed by a misogynist in Florida.

These events have caused many across the country to reconsider their safety and role in American society.

“Hate has survived in modern America and there’s no political consequences to being outwardly hateful,” Assistant Superintendent and Principal Marcus Campbell said. “It’s just devastating to know that even though we’ve done so much, this hate still exists.”

Jews around the nation and around the world have come together to remember the lives and legacies of the 11 congregants killed on Oct. 27.

“The Jewish community has really just put their arms around each other and embraced… to ensure that this will never happen again,” junior Sage Jacobson said. “As a people united there’s so much more that we can do to protect, not only the Jews, but everyone…there are so many people in the world who need that protection.”
Hatred and violence are not new to the Jewish Community, but for many, seeing active Anti-Semitism occur in America — a place of safety for those who fled the horrors of the Shoah and the Russian pogroms — is quite terrifying.

“Going [to Auschwitz] brought a sense of comfort, knowing that this won’t happen again. This is the generation that will stop this. Just seeing what’s happened I sat back and thought guys, what has changed? What’s new?” Jacobson said. “It’s upsetting to see the horrors of the Holocaust and then come back to America and see the same thing.”

The biggest reaction to this tragic incident has been an outcry of support from both Jews and non-Jewish people across the world.

“The number of people who are good, who love and who are kind far, far outweigh the number that are evil,” Rabbi Annie Tucker of Beth Hillel B’nai Emunah in Wilmette said. “I found myself thinking that as I watched footage from Pittsburgh; love and goodwill have so overwhelmed hate.”

On Oct. 28, a community vigil was held at Beth Israel Congregation in Evanston with speakers from all religious denominations. The event was standing room only, with chairs extending out of the sanctuary as more and more community members came to listen to those who spoke for the dead.

Several other such events have occurred in the days that followed, including funeral services in Pittsburgh.

“The response has been amazing. I’ve seen so many people talking about it… there were so many non-Jews there… which was really great,” sophmore Anna Levy said. “It gave me a lot of hope to see how many people stood united as one.”

In honor of those who had lost their lives while simultaneously showing the resilience of the Jewish community, the Israeli Club hosted a special discussion on Wednesday, Oct. 31, attended by over 60 students.

“We can’t let hate stop us from living, because that’s the goal: to honor these people who have lost their lives is to keep on living in a positive, fulfilling way. That’s honoring their memory,” Israeli Club Sponsor Jodi Alperstein said.

In response to the attack, cities across America, including Evanston, Skokie, Wilmette and Chicago, have deployed permanent police officers to synagogues lacking them and have increased security at those that already had police presence. Something suggested by President Donald J. Trump who said: “If they had protection inside the results would have been far better.”

“This is a house of worship there shouldn’t need to be armed guards there. A gun is still going to hurt people; a gun is still a gun,” Levy said. “[President Trump] was trying to get away from the topic of gun control, whereas he should be working on getting more gun control and stricter regulations on guns to prevent future tragedies. We can’t allow this to happen again. We can’t just let society and the government get away with letting this happen. We need to take our passion and actually make change.”

The Pittsburgh attack is far from the only hate crime of the past month. The attack in Jeffersonville, Kentucky resulting in the deaths of two African-American seniors also shook the community and nation.

The attack began after a white supremacist attempted to shoot up a church. After discovering that the church was closed, he went to a local Kroger killing one person inside the store and another in the parking lot. The victims and the killer had never met before that night.

“So few people are able to survive gun violence in America. That’s so, so tragic,” Campbell said.

In light of these events, religious and secular leaders around the nation have been advocating for the spreading of love, hope and justice. This includes Superintendent Eric Witherspoon who addressed the school on Oct. 29.

“We have the power to reject hate by taking action in our daily lives and lifting up our concerns for the well being and safety of one another – today, tomorrow, every single day,” Witherspoon said in his remarks. “We can counteract hate daily by honoring and cherishing our many differences and enviable diversity, by cherishing our different religions, cultures, languages, identities and races.”

With Witherspoon opening the doors to conversation, several teachers brought this discussion into their classrooms.

“Students need a place to vent, to be angry, to cry… we needed a place to get this out before moving forward,” history teacher Ganae McAlpin-Toney said. “It’s really hard, sad stuff and while I felt the need to talk about this it’s difficult to find a balance between positivity and reporting what’s going on in the world.”

McAlpin acknowledged that this balance is hard to accomplish but that it is one that Evanstonians must strive to reach.

“We need to take a look at ourselves and ask if we’re willing to dedicate ourselves to making a change,” McAlpin-Toney said. “Evanston seems to think that their further along than they are; I don’t know if we can make national change, but we can make a huge Evanston change.”

McAlpin acknowledged that this change is hard to accomplish but believes, like Tucker, Witherspoon and Campbell, that we must try to reach for change through both large acts and through everyday acts of kindness.

“The only response is to love each other, and to recognize the humanity in one another,” Campbell said. “If faculty can model this to students, and students do it to one another, the world will be in a better place.”

“I hope that through working together, through love and hope and optimism, we’ll be able to build a safer world, to build a coalition of good,” Friedman said.