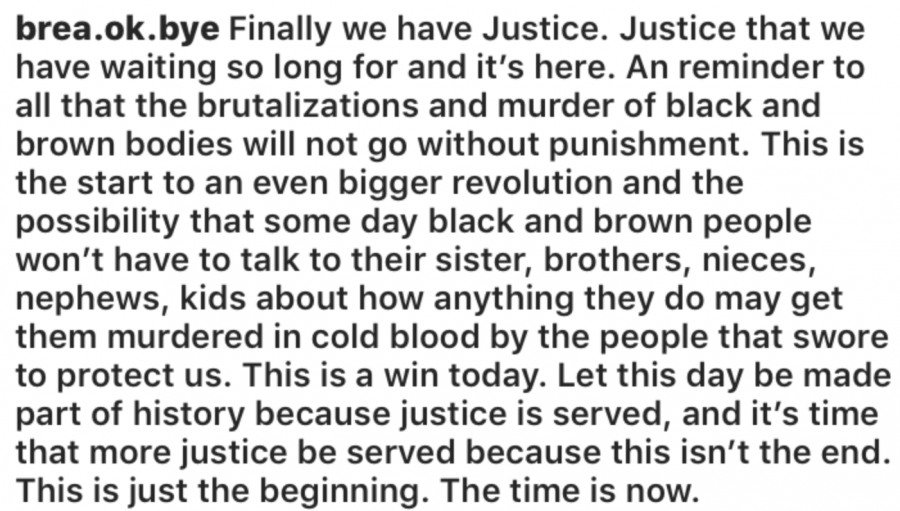 On the afternoon of Friday, Oct. 3, students and faculty anxiously gathered around their devices and listened to the long-awaited verdict on the charges against Jason Van Dyke, the Chicago Police Officer who murdered 17-year-old Laquan McDonald nearly four years ago. The jury found Van Dyke guilty of second-degree murder and 16 counts of aggravated battery — one for each shot the white officer took at the black teenager. Van Dyke was found innocent of official misconduct.

“[Hearing the verdict] was almost euphoric. I couldn’t really comprehend at first that he had actually been found guilty,” junior Ananya Visweswaran said.

While the “white cop, black victim” narrative is not new to segregated cities like Chicago, this outcome is. The Chicago Tribune reported hours after the verdict that “Van Dyke is the first Chicago police officer in half a century to be found guilty of murder for an on-duty shooting.”

History teacher and former CPS teacher Ganae McAlpin-Toney explained that she was both “extremely and pleasantly surprised.”

“I felt that if the decision didn’t go the way it went, the city would have gone up in flames,” McAlpin-Toney added.

McAlpin-Toney was not the only one taken by surprise at the verdict. The City of Chicago anticipated different results as well. In a public statement, the Chicago Police Department stated that they had spent months planning an increase in police presence in the city during the trial. Police superintendent Eddie Johnson assigned officers 12-hour shifts to “ensure maximum coverage for closing arguments.”

“I think that the fight is over for now. He will serve his time and hopefully this will never repeat itself, but there is not much we can do right now,” junior Seth Shimelfarb-Wells said. “Rioting won’t advance anything.”

Senior Joe Whitcomb, on the other hand, spoke to the need for stricter surveillance of police themselves. In June, 2017, three Chicago police officers were indicted by a grand jury for conspiring to cover-up the shooting. Dash cam footage revealing Van Dyke’s shooting of McDonald as he walked away from the officer was released more than a year after the teen’s death, according to NPR.

“Reforms in the Chicago Police Department aren’t working because they don’t want to follow them,” Whitcomb said. “If you want comprehensive oversight, don’t allow the police to police themselves.”

Visweswaran believes that “permanent reformation of the criminal justice system” is needed in order for police officers to routinely do their job and be held accountable for brutality.

“Problems with these institutions have not and will not disappear just because Van Dyke is in jail,” Whitcomb said. “It’s more of a flash point with his conviction than a spotlight on the issue.”

While systemic issues of police misconduct are not resolved by this one verdict, McAlpin-Toney advocates for youth to recognize their potential to make an impact.

“Youth need to keep pushing on the adults, keep informing the adults because I think that most of these issues are coming from the adults,” McAlpin-Toney said. “[Youth] must continue to share their story. They cannot get discouraged.”