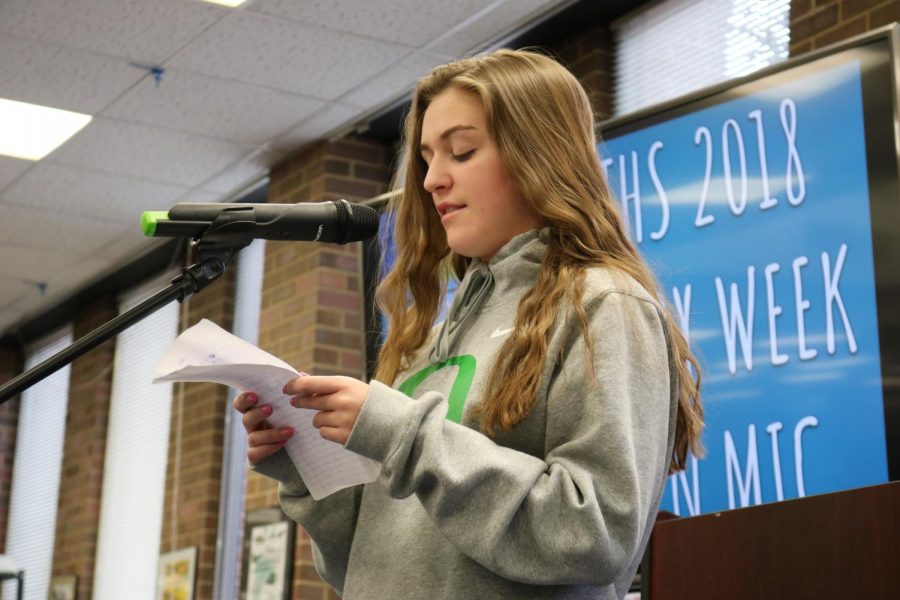 On Apr. 2-6, the 17th annual poetry week will be featuring workshops and performances by poets from the Chicagoland area.

“I love the way Poetry Week culminates and gives students such a great space to grow as writers,” speaker and workshop leader Adam Gottlieb said.

Along with Adam Gottlieb, other poets from the Chicagoland area – Kweku Collins, Dina Elenbogen, and Tony Trigilio – facilitated sessions.

“The point here is to get in the mindset of writing.” Gottlieb said in his presentation.

Kweku Collins took part in the poetry workshop on Tuesday and decided to focus his workshop on hooks. Students were taught what a hook was and how it’s used in music, poetry, and films. Then, they were encouraged to make their own hooks and share their work with their peers. On Wednesday, Gottlieb took the focus in a different direction by using the theme of peace. He encouraged students to think about what peace looks like and what stands in the way of peace. He invited students to share their thoughts.

“With all the crazy things happening in the world I want to give students a chance to talk about it,” Gottlieb said.

Each day had a different theme for students to come and work on poetry. Monday was performances, Tuesday’s theme was hooks, Wednesdays was peace, Thursdays was more workshops and Friday was an open mic for students to perform pieces they worked on during the week. “Sometimes you have to get out of your comfort zone, and put yourself out there,” sophomore Aakayla Shepard said.

There were performances from children from the Daycare center, safety officer Ron Barnes, Gottlieb, and many students. Topics such as race and poverty were discussed. People were also able to perform songs.

Freshman Liz Rathburn wrote and performed a poem called Couch. “I wanted to convey the emotions behind day-to-day poverty,” Rathburn said. “I was just sitting on the couch and decided to describe what was around me.” Rathburn has written other poems too and writes them because it’s “cathartic to get all that anger out on paper.”