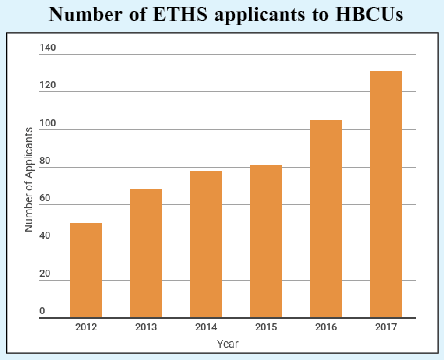 ETHS will be hosting a Historically Black Colleges and Universities (HBCU) Panel on Dec. 20 to combat misunderstandings regarding institutions founded to educate people of African-American descent.

“The media affects all levels of perception of black culture and the HBCU as a staple in black culture is directly affected by this misperception,” freshman Quinn Hughes said.

Misperceptions about historically black colleges and universities are the result of years of prejudice and stereotypes against the black community, which have become an intrinsic part of American media. According to the Washington Post and Huffington Post, some of these misconceptions are that HBCUs are not diverse, are party schools, don’t teach anything valuable and are racist. Yet, this lack of knowledge about the actual black community resulted in the increased demand for information in Evanston.

“[Students] wanted to understand these schools better and push aside the lack of understanding that we have towards them,” Beth Arey, College & Career Center Coordinator said.

HBCUs have recognized major programs and graduate over 20% of black undergrads and 50% of black professionals. Schools like Howard, Spelman, and Hampton have graduated renown personalities: Toni Morrison, Thurgood Marshall, Zora Neale Hurston, Andrew Young, and Ta-Nehisi Coates. However, only a small percentage of black students at ETHS annually apply to HBCU’s.

“Lots of them are lacking funding from the state and therefore, students need to pay more to cover that deficit,” Arey said in relation to low levels of student attendance rates from Evanston.

Diversity, Arey argues, also plays a pivotal role. For some, Evanston’s diversity may cause hesitation towards attending a school of primarily one race. Of course, many disagree with this completely.

“Whiteness is still extremely present in Evanston,” Hughes said. “HBCUs offer a place of healing for the struggles synonymous with blackness regardless of where you are in America.”

Similarly to Hughes, despite the seemingly diverse world of Evanston, Rae Killebrew, a former Evanston student and current junior at Alabama A&M, chose to head off to a HBCU.

“Going to a predominantly white high school made me want to experience a majority black school where being black doesn’t have a negative connotation,” Killebrew said.

One of the leaders of the panel, Alana Amaker, counselor, agrees saying that even if the school is predominantly black that doesn’t mean that there isn’t diversity in the religious or ethnic makeup of the school, not to mention the benefit that it can give students.

“Very few black kids are in AP Classes and Honors classes in Evanston, meaning that those who are can feel embarrassed and misrepresented; in black environments, this doesn’t occur,” Amaker said.

The panel itself will be composed of several such students who have left Evanston bound for HBCUs, and whom according to Amaker “have had their whole life transformed.”

Killebrew feels, much like Coates, that HBCUs are the Holy Grail for blacks in America; a refuge which has forever changed her life as she bonds with people who believe the same things as her.

“Going to an HBCU has really given me more perspective and has shown me that it’s ok to be live a black lifestyle in America,” Killebrew said. “It’s definitely an experience that will mold and change your life.”

While acknowledging that these schools aren’t for everyone, the experiences that they offer, according to Amaker and Arey, are priceless.

“The power of black people and black communication is something so powerful and so unrestrictable and is something that can only be found at a place like an HBCU,” Hughes said. “Something truly wonderful is found there.”