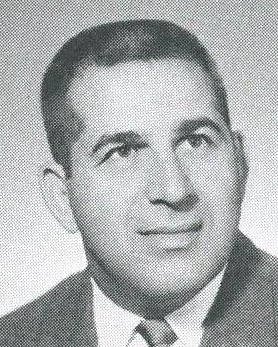 George Elias is an ETHS legend who will never be forgotten.

This past summer, legendary ETHS wrestling coach Elias George passed away at the age of 92.

George was the head coach of the wrestling team from 1958-2000, assistant coach from 2000-2003, and interim head coach for one year in 1987, where he mentored present day Athletics Director, Chris Livatino.

“My freshman year, coach George took over as the interim head football coach,” Livatino said. “The team started off 0-2, and then they ended up winning the next seven games, went to the playoffs, and had a pretty good finish to the season.”

During his time as head wrestling coach, George led his teams to eight top 10 finishes at state and coach nine individual state champions. He also compiled 614 dual meet wins, with only 158 losses and 25 ties. This ranked him third nationally on the all-time coaching list when he retired.

George was inducted into the ETHS Athletic Hall of Fame in 2015 and the Illinois Wrestling Hall of Fame in 1997. He also served eight years on the U.S Olympic Committee.

“As a coach, he was an extremely tough guy, and he didn’t like to hear any excuses,” Livatino explained. “He definitely set a high standard of excellence, and he worked really hard to try to achieve all his goals.”

George was not only a great coach, but also great wrestler himself. He won a high school state championship in 1942 and he won a Big Ten championship at Indiana University and captained an undefeated Oklahoma State wrestling team in 1949.

“He was, without question, our most successful wrestling coach ever,” Livatino explained. “He was a man who instilled toughness and discipline in his student athletes. For a lot of kids he was a father figure to them.”

Everything that Elias George did for ETHS wrestling will not be forgotten, and he will go down in athletics history as one of the greatest of all time.