Speech and Debate travels to Kentucky for national championship 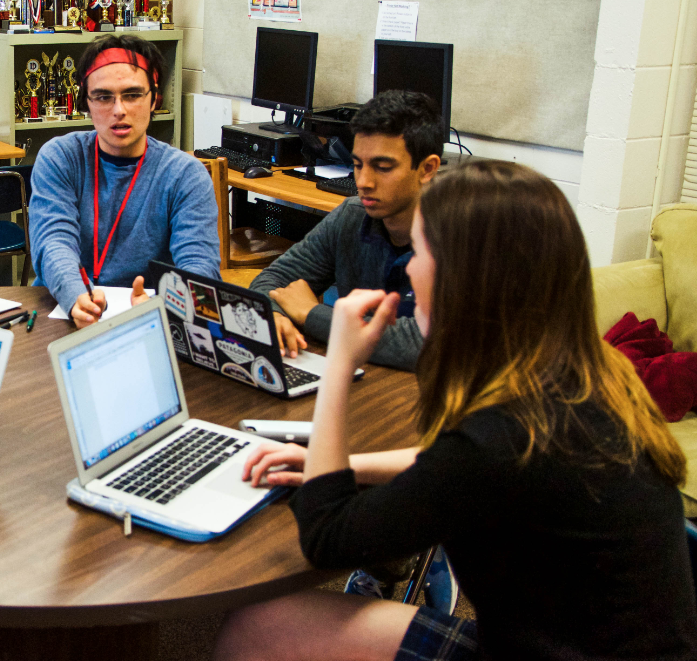 Speech and Debate will send eight students, the most they’ve ever taken, to the Tournament of Champions (TOC) at the University of Kentucky, April 29-May 1.

“The Tournament of Champions is one of the more elite tournaments,” head coach Jeff Hannan said. “Qualification is based on success and entries are limited to the top 82 in each event.”

To qualify, students had to earn at least two bids. A bid is obtained by reaching a certain level of elimination rounds at national tournaments throughout the year.

“The team has grown and had success at all levels and events,” Hannan said. “A lot of our accomplishment has come from individual achievements.”

This is the first year the team has qualified students in three different events. Seniors Honor Allen and Daisy Chaudruc, along with juniors Oliver Brady, Sofia Chaudruc, Izzy Bavis, and Gigi Wade are qualified to compete in Public Forum, which is a two-on-two debate. They will have to win five out of seven preliminary rounds before advancing to elimination rounds. Students have been researching the Electoral College, which is the topic area they will be debating for the TOC.

“We get a new topic every month, so it is important to do a lot of research on each one,” Brady said.

For Congressional Debate, senior Alison Grimsted will compete with 18 other students in four, three-hour preliminary sessions. They will debate on a range of topics, in a way similar to how the US congress operates. The top six competitors will advance.

Junior Gabi Senno will compete in Original Oratory. There will be five rounds of speeches with six students competing in each section, each getting ranked every round. The top 12 overall will advance.

“The tournament hosts some of the best debaters in the nation,” S. Chaudruc said. “It would be great if we could get through the first set of preliminary rounds.”

On top of a school record high number of students qualified, seven out of the eight participants are female. According to the Washington Post, judges’ critiques often target women’s tone of voice instead of their argument, using words such as “naggy” or “shrill.” On top of that, many girls have points taken away just because of what they are wearing.

“It’s difficult because we have different standards from the boys,” Allen said. “It’s harder to assert ourselves in a conversation without coming off a whiny”

The Washington Post also explains that a female debater was never placed in the top 20 competitors in the national high school rankings last year. Despite the challenges they face, the team is excited to compete in the TOC.

“Boys usually win the big tournaments,” S. Chaudruc said. “My sister and I are a female-female team, so it feels especially good to qualify to for the tournament.”

Many students on the team have found that Speech and Debate actually helps equip them with life skills they can use after their time on the team.

“Speech and debate has taught me how to think about both sides of an argument and how to interact with people from all over the country,” Allen said.