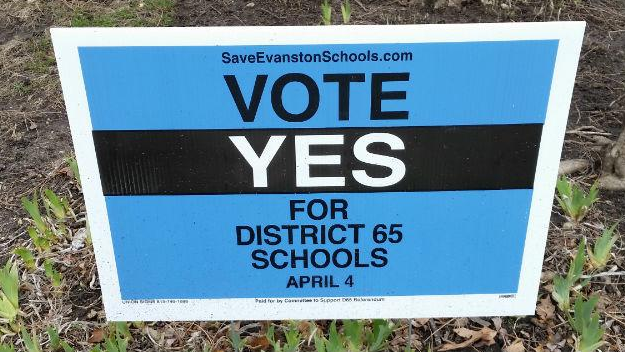 Although members of the Evanston/Skokie community will pay an additional $39 in property taxes next month, the referendum that passed in the April 4 vote will use those funds to protect District 65 sports and arts programs.

The school district has been in a deep budgetary crisis over the last 10 years due to the cost of generating resources for the increasing student population and maintenance for the staff. This has caused reductions in various sectors of the budget, although they have been nearly unnoticeable.

In the past few years, there have been cutbacks in janitorial service and funding for middle school drama programs. However, the reductions have not been enough to compensate for the deficit.

As a solution, a resolution was formed at a district board meeting in January to increase citizen property taxes to protect future arts and sports programs from further cutbacks.

On April 4, voters took to the polls, and it became clear early in the night that there was overwhelming endorsement for the referendum. It passed by over 80 percent and will be effective immediately.

Prior to the referendum tax hike, families paid an average of $8,000 a year in property taxes. That average is set to increase by $470 per year, which is a sizeable amount for some families, as Evanston’s tax rates already exceed its neighbors. According to Evanston Now, Evanston’s city property tax levy has increased 9.71 percent over the past four years and is nearly 10 percent higher than the combined levies for surrounding suburbs.

While students and voters alike recognize financial drawbacks to the referendum, they contend that the preservation of recreation among the youth is necessary.

“Arts and sports are incredibly important and are what keep a lot of kids in school,” junior Quinn Doroba said. “Ultimately, the benefits of the referendum outweigh the tax increase.”

Specifically, funds collected will protect band, orchestra and athletic programs in District 65, while expanding 1:1 technology programs and reserving money for the annual upkeep of schools.

The vote to pass the budget referendum has important implications for the future as well.

“We now have enough resources to be deficit free until the 2025 school year,” District 65 Supt. Paul Goren said. “This allows us to accelerate our momentum towards student learning and be financially stable while doing so.”

In the meantime, the district hopes that further crises will be averted so that positive developments can occur within the school environment. In terms of the budget after 2025, students recognize structural issues within the Illinois government that hinder full fiscal security in the district.

“The referendum is an important part of fixing district issues, but it’s only the first step,” sophomore Abe Frolichstein-Appel said. “The laws restricting taxes in Illinois have to change for budgetary issues to be fixed in the long term.”

The referendum itself surpasses the tax cap set by the state of Illinois, and it provides a level of economic security to District 65 should the state freeze property taxes permanently (a consideration within the Illinois House). Long term, however, there will be a need for more funds. This may force a change in current state resources allocated to the district, which are capped at $600 per student in contrast to the district’s $14,150.

The future aside, officials in the district believe that the passage is a testament to local appreciation for the public schooling system.

“Referenda fail seven out of 10 times,” Goren said. “The fact that we passed this with over 80 percent support is a powerful statement.”