Students look back at the Holocaust for upcoming remembrance days 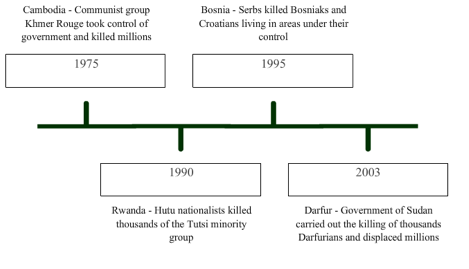 To educate and create more discussion about the genocide, interactive presentations will be shown four days this April during Holocaust Remembrance Week.

“We try to make the event relevant so that teachers of different subjects want to bring their students,” faculty sponsor Aaron Becker said.

In 1990, Illinois passed a mandate requiring every school to teach about the Holocaust. ETHS has hosted Remembrance Week for the past 20 to 30 years. Originally, the event was scheduled to take place the week of April 10. Due to scheduling conflicts with the Jewish holiday, Passover, it will now take place on April 10, April 13, April 18 and April 27.

“Many students feel like they already know a lot about the genocide because of what they have been taught in school,” Becker said. “The goal of the event is to use the Holocaust to make sense of things today, go more in-depth about the history and keep people aware.”

Many of the planning and presentations were done by the student committee, which consists of seniors Jakob Reinke, Michael Faibishenko, and junior Gavi Welbel. They spent a lot of time researching, scheduling, and coming up with ideas that will engage students.

“People shouldn’t expect the week to be uniform,” Reinke said. “Every year, we try to approach the Holocaust in a unique way and look at the broader picture.”

On the first day, students will break out into classes and provide background information.There will also be a writing workshop taught by Todd Hasak-Lowy, a Holocaust memoir writer. The second day will focus on genocides since 1945.

“Every year, there is a theme for the week,” Becker said. “This year, the theme is ‘Have We Learned Anything?’”

ETHS was lucky to get in contact with a Holocaust survivor, who will talk to students on the third day. There will also be discussions with a historian about the theme.

“Meeting a Holocaust survivor allows people to learn history on a personal level,” Faibishenko said. “It’s something that many people take for granted.”

On the last day, the presentations will focus on modern impact and some threats of today. There will also be a panel, where students and teachers can debate.

“Some people may feel like we talk about these issues all the time, but we really can’t stop talking about them because they aren’t resolved yet,” Becker explained.

According to CNN, since January there have been over 100 bomb threats called in to Jewish community centers. The threats targeted over 81 locations and across 33 states. Parents have started pulling their students out of Jewish schools for fear of their safety.

“I think it’s challenging for people who live in places like Evanston, where it’s so diverse,” Faibishenko said. “We just don’t experience the amount of hate that really goes on in America.”

Antisemitism is far from gone and has never really left the country. With all of the recent hate crimes and action in the news, some people are starting to feel a new sense of power over others. Many minority group’s rights are being threatened, similar to the way Jews and other non Aryan group’s rights were during the Holocaust.

“We still have communities that are so segregated where it’s easy to develop stereotypical thinking,” Becker said. “People need to stand up for each other and go out of their way to make real friendships.”