Student protesters to continue activism throughout this year 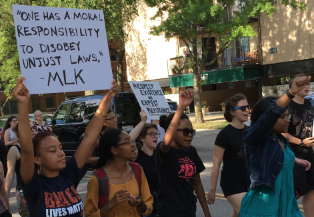 In reaction to the recent deaths of Alton Sterling and Philando Castile, hundreds of students and residents gathered in the streets of downtown Evanston on July 9 and 14 to participate in student- organized protests.

“I was angry and hurt at the recent news,” said Sinobia Aiden, junior. “I think the reason it stung so much was because I knew it could’ve been my father, cousin, or uncle.”

Class of 2016 graduates Camille Allen and Spencer Nabors organized the July 9 protest after seeing the videos of the shootings. They created a Facebook event called Evanston Against Police Brutality, calling for people to gather at Fountain Square to condemn the shootings of black men and create a safe space to vent and heal.

Sophomore Liana Wallace read a poem she wrote to the crowd of almost 200 people, calling for non-violent protesting and asking people to pressure lawmakers into ending institutionalized racism in America.

“I realized that officers are scared, so they shoot, but nobody’s life should be taken because you’re scared,” said Jaydlyn Rogers, junior.

The July 14 march was organized by Cicely Fleming, president of OPAL, a group dedicated to achieving equity in Evanston, and Sinobia Aiden, junior. Together, they organized a march through Evanston’s main streets during rush-hour traffic.

“The difference was that we forced people to acknowledge the movement instead of making it an option,” said Aiden.