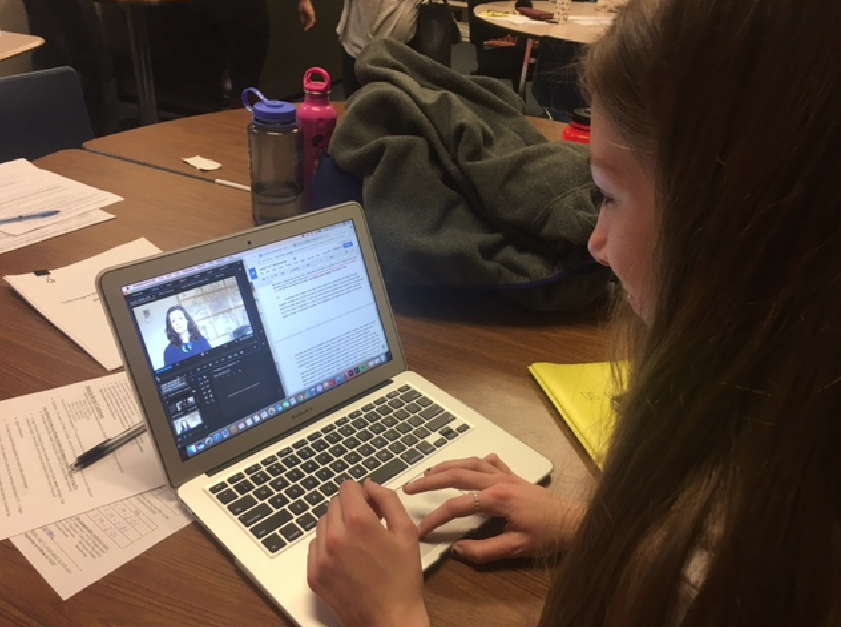 While widespread social activism in the female community has been on the rise as of late, two Senior Studies projects are taking a more direct approach to tackling women’s rights issues.

Seniors Abbey Blakeman and Lanie Lott are both creating projects that are looking to generate awareness towards different issues of representation in the female community.

Blakeman is creating a photo series that focuses on how societal beauty standards impact women’s self-image and self-confidence. The project features members of the student body for the project and encourages students to have a more positive mindset towards their bodies.

“I want my project to be as inclusive as possible of all people who identify as female,” Blakeman says. “In any similar projects I’ve seen, even if the purpose is to make it diverse, it tends to focus on thin, white, binary women, and so I want to represent as many different races and body types as I can.”

Senior Studies teacher Steve Newman says that students in Blakeman’s class have been very receptive of her project, and some of them are even participating by being photographed.

“I think that it hopefully will allow her audience to view females perhaps in a different light, and judge and scrutinize their own views of beauty, and how women are especially portrayed in photographs and the media,” Newman says. “I also think that she herself is kind of a nice role model for showing somebody who’s addressing this problem by doing it with humility and confidence herself.”

Lott’s project focuses on working mothers, and their everyday experience involving balancing work life and home life. The project’s main idea is to give life to the stories of women in Corporate America who often have to choose family over work at a point in their lives.

“For women, around 30 is the age that their status’ going up in work but they’re also thinking about having kids,” Lott says. “That’s just kind of a prime time, so my project is talking about how women don’t really have it where they can have it all, and a lot of time women feel forced to choose, whereas men don’t.”

Senior Studies teacher Dave Allen says that the Evanston community has been a real asset to Lott’s project, which addresses a topic that is new to Senior Studies. Her documentary provides her viewers with more than just numbers regarding pay gaps and inequality in the workplace by incorporating more local and personable examples.

“These are people that Evanstonians are going to know; these are our neighbors, these are our friends,” Allen says. “I think instead of saying ‘72 cents on a dollar’ you can say ‘my neighbor had this experience’, and I think it personalizes this issue.”

“I really want to impact people, and just have that realization where it’s not equal, not necessarily just in Corporate America but in a lot of workplaces,” Lott says.

Both students are addressing topics very relevant to the Evanston community, and have used the diversity of the city to enhance their projects and expand their reach in order to make their work as successful as possible. By addressing relevant issues with a head-on approach, both students expect to make a difference in the world around them.

For more information on women’s body image issues, visit Claremont College’s “Why Don’t I Look Like Her? The Impact of Social Media on Female Body Image”.