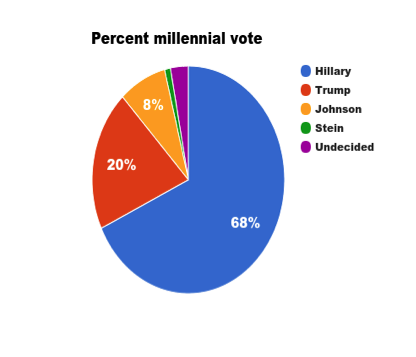 With the end of the race just around the corner, it is clear who the bulk of Evanston’s youth will cast its vote for this election.

“Hillary knows how to get things done,” senior Grace Giangreco says. “I think the most important characteristic in a leader is the ability to listen to all perspectives, and then be able to translate that knowledge into action.”

According to City-Stats.org, with over 75 percent of Evanston identifying as Democrats it has never been a toss up which way the town will swing, but this election yields unique results to the amount of Republicans that have jumped ship once it turned out Trump was steering.

“Trump has just become so polarizing. His comments go so far away from what the mainstream is, and in general I think most people in the US tend to gravitate towards the middle,” AP government teacher David Feeley says. “Hillary tends to play more towards the middle, because most elections are won by winning the middle and the undecided votes. Whereas Trump has really stayed focused on the far right.”

Taking the “middle route” is a strategy that has worked heavily in Hillary’s favor this election. According to a poll done by USA Today, Hillary has set record highs for her level of millennial support this election reeling in a solid 68%, which exceeds the previous record set by Obama’s 2012 campaign. Trump, on the other hand, is polling at a record low with millennials.

Trump is even losing many Republicans. The list of Republicans that have retracted their endorsement has continued to grow ever since the release of the Access Hollywood tape in which he bragged about sexual assault, which he described as ‘locker room talk’, and more and more women accusing him of assault.

“Trump’s leaked video of his conversation with the press was in no way ‘locker room talk’,” junior Kathryn Campbell says. “What he said was extremely disrespectful to all women around the country who have experienced sexual assault. Seeing someone who admits to, and dismisses the seriousness of sexual assault run for President and possibly represent this country was a serious and sickening wake up call for many.”

Clinton’s experience is something Trump has found hard to compete with, and as election day nears and new scandals are released, many will re-evaluate their vote, but Evanston will always bleed blue.

To learn more about the Clinton campaign, visit hillaryclinton.com.